Renaming: Next Steps, So Many Steps in Alexandria...
Votes

Renaming: Next Steps, So Many Steps in Alexandria... 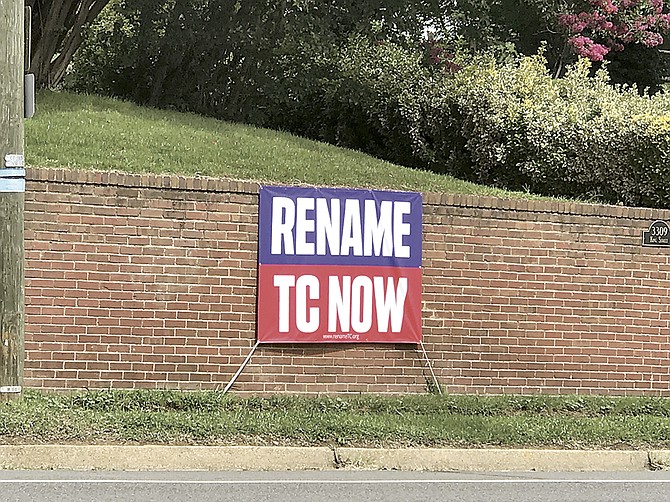 A 5-foot-by-4-foot, 20-square-foot banner near the T.C. Williams campus advocates for a more decisive approach to renaming the high school. It exceeded the Zoning Board’s square footage requirements and had to be taken down. Photo by Bridgette Adu-Wadier

Alexandria school administration is taking a different approach to ditching the T.C. Williams name, educating the community to get buy-in instead of just striking the name outright like many other school districts. A 20-page document released last week outlines an intensive community engagement process complete with videos, informational flyers, community chats, student-led discussions and interviews with former students. The process will last through a public comment period in November.

The School Board is expected to vote on whether to change the name of the high school on Dec. 18, followed by another vote in March 2021 on what the new name should be. That means Alexandria likely won’t bid Thomas Chambliss Williams goodbye until next school year.

But Superintendent Greg Hutchings says education should be the immediate priority, disappointing advocates who feel the system is working too slowly.

“We don’t want to rush without educating people who aren’t educated,” said Hutchings at the Aug. 27 School Board meeting. “I classify this as a major decision because there are financial implications that come along with this.”

School officials estimate the name change to cost at least $350,000, based on the number of items with the T.C. Williams name on it, including sports uniforms and school property.

PART OF THE REASON School Board members say they chose this process is to address systemic racism that manifests in disproportionately low minority representation in advanced classes and low Hispanic male graduation rates at Alexandria’s high school. Board members argue that the community engagement process would allow students to discuss these barriers, raising awareness about the history of T.C. Williams and current racial inequities.

“We have so much work to do,” said School Board member Margaret Lorber. “It will be meaningless to rename T.C. Williams if we don’t make changes.”

The superintendent says community engagement will put minority students at the forefront, as, he argues, they should be. The document and the superintendent say there are few Black and brown voices in the discussion currently, and “student voices appear to be managed by community leaders outside of ACPS.”

T.C. senior Sarah Devendorf says a July protest with nearly all-white students covering up the marquee with bedsheet was not representative of all the students involved in the campaign to rename the school, which includes many vocal minority students.

“Dr. Hutchings needs to take a closer look at our group,” said Devendorf. “We had a lot more diversity in the group than those who showed up to cover the sign.”

Student protesters invited the Black Student Union, but only one Black student showed up. According to Devendorf, minority turnout declined after the protest and confrontation with administrator Julia Burgos.

“It’s just so unrealistic, putting us in a timeframe that works for them and not for us,” said T.C. senior Fina Osei-Owusu. “They want students to work around their time, not realizing that we — especially seniors — have to work around our time with applying for colleges, studying for SATs and ACTs — which they’re not providing — and on top of that, we have clubs, we want to get our grades up.”

THE PLAN isn’t popular with everyone.

“I just worry that there’s too much included. It kind of feels like a three-credit college course to me,” said Board member Jacinta Greene. “It just seems like way too much for me. Will we lose people in the process?”

Most events planned for the community are scheduled to occur outside of school hours, a challenge for students and parents overwhelmed with virtual classes, exam prep, family responsibilities and finding consistent internet.

“This is designed for kids who don’t have jobs, kids who can do stuff after school, kids who can get online and like being online and have 24-hour access to the internet,” said Julie Jakopic, a long-time community leader and supporter of an immediate name change. “That doesn’t describe low-income students of color to me.”

Glenn Hopkins, a Black man and community leader who’s been pushing for a name change for 22 years, said the school board is abdicating its decision-making authority, placing the burden on the students.

“In December 2021, I’m going to vote and my vote is heavily dependent on where each School Board member stands on this issue. I’m going to rally all my friends to vote.”

ADMINISTRATORS say they’re striving for full student engagement and support for a name change. But Lorraine Johnson, School Board student representative and T.C. senior, says that some students will just check out until a decision is made.

“Student engagement for this renaming process is like a TV show,” said Johnson at the board meeting. “Not everybody’s going to watch the whole thing. There will be people who are going to be there week after week being apart from this process, and then you have people who will just wait till the end.”

Though the board voted unanimously in July to support an engagement process, all eyes are on the December vote, which has the capacity to follow the School Board members to the next election.

“I vote in every local election,” said Mai Trinh, mother of a T.C. freshman who supports an immediate name change. “In December 2021, I’m going to vote and my vote is heavily dependent on where each School Board member stands on this issue. I’m going to rally all my friends to vote.”