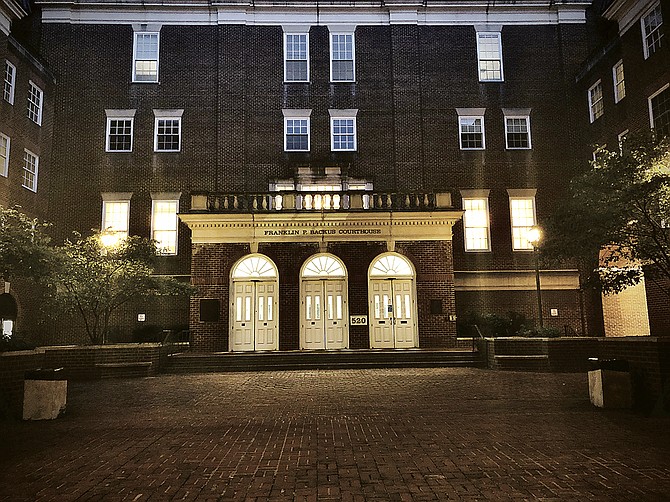 Judges in courthouses across Virginia may soon need to be on call at night to consider search warrants. Photo by Michael Lee Pope.

The sad and tragic case of how a police department in Kentucky mishandled the execution of a warrant after midnight has prompted soul-searching among police agencies and law-enforcement officers across the country. Now lawmakers in Virginia are about to consider banning no-knock warrants and creating a new requirement that judges — not magistrates — sign off on search warrants executed at night.

“Kicking down people’s doors in the middle of the night is bad,” said Andrew Elders, policy director for an advocacy group known as Justice Forward Virginia pressing lawmakers for reform. "It creates volatile situations where people are more likely to feel threatened, and someone is more likely to get hurt in the end.”

Members of the General Assembly will be returning to Richmond next week for a special session to re-write the budget in the wake of COVID and consider a host of criminal-justice reforms. Although the special session on criminal justice reform was called in response to the murder of George Floyd in Minneapolis, the death of Breonna Taylor in Louisville has sparked calls for reforming how no-knock warrants are executed, especially in the dead of night. Last week, Senate Democrats introduced a bill to eliminate no-knock warrants and require a judge to sign off on nighttime search warrants.

“All that does is allow a criminal to hang up a shield to say they’re in business at night,” said Herndon Police Chief Maggie DeBoard. "Criminals with full rein to run their sex trafficking and all the things they do at night without us having the ability to quickly get into a residence or an establishment anywhere where we don’t have the legal right to be without a search warrant.”

HERE IN ALEXANDRIA, police executed six no-knock warrants in 2018 and five in 2019. So far this year, according to Alexandria Police Department spokesman Courtney Ballantine, one no-knock warrant has been issued so far this year in the city. He says the police department views these kinds of warrants as a necessary way to handle difficult situations a handful of times each year.

“Banning them concerns us because there is a reason for them,” said Ballantine. “It’s either to take somebody into custody who’s very violent or has the potential to be violent or to protect evidence.”

The Virginia Association of Chiefs of Police opposes the effort to ban no-knock warrants, setting up a clash next week in Richmond between law-enforcement agencies and the Democrat majorities in the House and Senate. When Democrats finally seized power earlier this year after a generation out of power, they considered several criminal justice reform efforts but ended up delaying most of them while the Virginia Crime Commission studied various proposals. Now that the issue is red hot because of nationwide protests in reaction to the deaths of George Floyd and Breonna Taylor, House and Senate Democrats are feeling the heat to take action now.

“Kicking down people’s doors in the middle of the night is bad. It creates volatile situations where people are more likely to feel threatened, and someone is more likely to get hurt in the end.”

“It would be my preference that we not say the police can enter your home without announcing themselves,” said Claire Gastanaga, executive director of the ACLU of Virginia. “I want to be sure that when warrants are served on people, they are done with probable cause and that they are done in a way that’s respectful of the person’s inherent right against search and seizure, particularly in their own home.”

THE ROLE OF JUDGES is a central part of the debate over search warrants, and many lawmakers believe they should play a greater role in signing off on search warrants — especially search warrants that are executed at night. Last week, Senate Democrats introduced a bill requiring that search warrants “shall be executed only in the daytime unless a judge authorizes the execution of such search warrant.” It’s a proposal that has the support of the newly formed Progressive Prosecutors for Justice, which includes commonwealth’s attorneys from Alexandria, Arlington and Fairfax County.

“A magistrate is going to look at probable cause, and they’re not going to ask any questions concerning whether there’s a safety issue,” said Hampton Commonwealth’s Attorney Anton Bell, a member of the Progressive Prosecutors for Justice. “The safety aspects of what we are trying to achieve far outweighs anyone’s inconvenience.”

The proposal to require judges to sign off on nighttime search warrants illustrates a divide among prosecutors. While the idea has the support of the Progressive Prosecutors for Justice, the Virginia Association of Commonwealth’s Attorneys had no position on the issue. And several prosecutors across Virginia have criticized the idea. Fluvanna Commonwealth’s Attorney Jeff Haislip is the president of the association, and he says would end up creating more problems than it solves.

"I think having to do them during the daytime hours would be very difficult for law-enforcement officers to do their job,” said Haislip. "They need to act when they can act, and I don’t see anything wrong with serving a search warrant at night.”

THE SPECIAL SESSION this year comes at a time when Democrats are still figuring out how to handle their new role in the majority. It also comes at a time when House Democrats and Senate Democrats are divided over how to approach the issue. Senate Democrats have already released their package on policing reform while House Democrats have yet to outline their proposal. That means police agencies and sheriff’s offices are weighing in on the Senate bill, including some rural parts of Virginia that don’t have as many judges as urban areas.

Judges in Virginia are selected by the General Assembly, a tradition that dates back to the commonwealth’s history with English common-law. South Carolina is the only other state where judges are selected almost exclusively through legislative selection, and every year brings a new round of drama over which judges are installed at courthouses across Virginia. Magistrates, on the other hand, are appointed by the executive secretary of the Supreme Court of Virginia.