A New Era for Affordable Housing in Alexandria
Votes 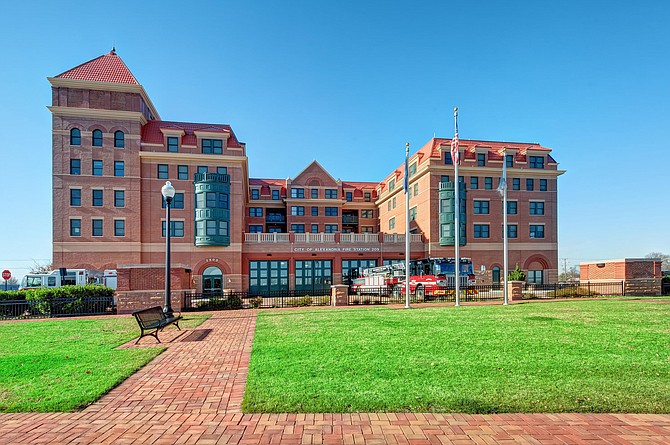 The Station at Potomac Yard made people think differently about affordable housing in Alexandria. Housing Director Helen McIlvaine says it "helped people imagine that affordable housing could be places where it hadn’t been before," in this case on top of a fire station.

Church of the Resurrection “The Spire," developer AHC

Church of the Resurrection “The Spire”

The Episcopal Church of the Resurrection will be demolished and replaced with a new building that includes 113 affordable rental units and a new smaller sanctuary for the church. A final site plan is still in the works.

The Carpenter’s Shelter will be demolished and replaced with a new building that includes 97 affordable rental units above a new homeless shelter. The building includes 10 supportive housing units with case management support for people transitioning out of the shelter into affordable housing.

The Station at Potomac Yard

Atlanta-based construction company Pulte Homes donated one acre of land and $14 million for the project, which combines a fire station and retail space with 64 units of affordable housing. The building operates as a condominium with AHDC owning the residential and retail condos and the city owning the fire station condo.

The church sold a deteriorating parking lot to developer Wesley Housing for $4 million, and now City Council is considering using almost $8 million from the affordable housing fund to build 81 units of affordable housing. Because the project is still under consideration, the affordability levels of units have yet to be determined.

This 74-unit rental building is part of a new complex of buildings at King Street and Beauregard Street along the city’s future West End transitway. It includes market-rate apartments, offices and retail including a new Harris Teeter.

“We are marching toward the goal,” said Helen McIlvaine, director of the Office of Housing. "That’s partly the underpinning for why we got the dedicated funding through the meals tax because we’re not going to be able to meet that goal unless we have the resources to do it.”

The goal is to create or preserve 200 new affordable housing units a year every year for 10 years, a target adopted in 2013 as part of the city’s housing master plan. So far only 624 units have been created. That's far short of the 1,000 that should be available by now, although city officials say they have a number of projects in the pipeline. And all that new cash from the new increase in the restaurant meals tax will help finance about one new large-scale development a year, setting the stage for a new era in affordable housing.

“The goal was rather modest,” said Michelle Krocker, executive director of the Northern Virginia Affordable Housing Alliance. "If you skip over to Arlington, they’ve got a goal of 600 units a year. They haven’t met that either by the way.”

THE AFFORDABLE HOUSING CRISIS in Alexandria began in the 1980s, a time when low-income people and elderly residents on fixed income were being driven out of the city. Alexandria leaders became concerned that government employees and restaurant workers would be priced out of the city, leaving jobs and services unfilled. No one was more concerned about this than Vola Lawson, who became city manager in 1985 after more than a decade of implementing programs to aid low-income families and senior citizens.

“For low-income families, it is the worst of times,” said Lawson during a 1986 press conference with leaders from Fairfax County and Arlington. “This is a crisis of epic proportions.”

Lawson assembled a coalition that included Fairfax County Supervisor Tom Davis and Arlington County Board member Al Eisenberg to advocate for state funding. Meanwhile, she set up the city’s Affordable Housing Trust Fund and started taking voluntary contributions from developers. That led to a few preservation efforts, renovating a few old and dilapidated apartment buildings. Within a decade, the fund was dead broke until Norfolk Southern forked over $5 million as part of a settlement to develop the Carlyle neighborhood.

“This will put our trust fund back in business again,” said Mildrilyn Davis, who was then director of the Office of Housing.

FOR MANY YEARS, the aim of the city’s affordable housing program was to help people buy homes. Then the cost of housing exploded in the early 2000s, and city officials took a different approach. They created the Alexandria Housing Development Corporation and dedicated a penny of the property tax to affordable housing, pumping about $3 million a year in a fund so the newly created nonprofit development corporation could start preserving or building new units.

“We’re going to become the housing on top of stuff Housing Office,” recalled McIlvaine. "I think that project helped people imagine that affordable housing could be places where it hadn’t been before.”

The Station at Potomac Yard, as the project became known, started a new era in the city’s affordable housing efforts — one that’s now in full swing with a series of large scale redevelopments. Churches all over Alexandria are being demolished and replaced with affordable units over new sanctuaries — building on the model that McIlvaine helped create in Clarendon. And developers like Wesley Housing and AHC (formerly known as Arlington Housing Corporation) are working alongside the Alexandria Housing Development Corporation to transform the landscape of affordable housing in Alexandria.

“In the ‘80s and ‘90s, affordable housing in Northern Virginia was mostly preservation,” said Nina Janopaul, president and CEO of the Arlington Partnership for Affordable Housing. “What’s changed today is that a typical garden apartment unit in Northern Virginia is in such hot demand and investors are buying them up putting in granite countertops and stainless steel appliances and doubling the rent. So you can’t buy one for less than $200,000.”

EVERY CAMPAIGN CYCLE, the issue of affordable housing is at the top of the agenda for elected officials. They all agree that the issue is one of the most important topics facing the city. But when faced with how to actually spend Alexandria’s affordable housing money, opinions can be sharply divided. Take Jackson Crossing, for example. When members of City Council were considering a proposal from the Alexandria Redevelopment and Housing Authority, Allison Silberberg initially voted against it during her time as vice mayor after hearing concerns from neighbors that the building didn’t have enough parking.

“Let me tell you, I was right,” said Silberberg. "That neighborhood is now complaining about people parking on the street and going to that building.”

RECENT YEARS have seen a dramatic shift in the amount of spending the city is pumping into affordable housing projects, and Alexandria has a number of large-scale efforts in the pipeline. The penny of the tax rate that was once set aside for affordable housing has now been reduced to seven tenths of a penny, although restaurant diners will now be forking over millions of dollars to help the city meet its goal. In many cases, churches are playing a key role in providing land and support. Three of the projects now being developed are on land that was acquired from churches.

"We’ve got multiple projects with houses of worship right now in various jurisdictions,” said Shelly Murphy, CEO of Wesley Housing. “Many of the churches, they may be older congregations and they may need an infusion of money to help them continue to operate or to change the way they are operating.”