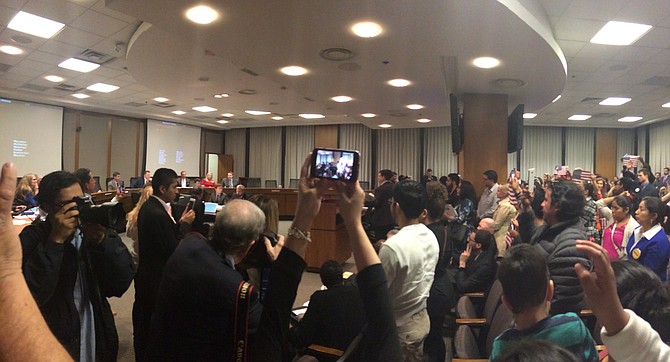 Supporters of an effort that would allow drivers licenses for undocumented immigrants flooded the Transportation Committee, but Republicans killed the bill on a party-line vote. Photo by Michael Lee Pope.

Undocumented immigrants in Virginia will not be getting a driver’s license anytime soon, although advocates for the idea say they will keep pressing lawmakers on the issue. Wednesday afternoon, the Senate Transportation Committee killed a bill introduced by Sen. Scott Surovell (D-36) that would have done just that — a bill the senator called his "licenaias para todos legislation.” Republicans killed the bill with a party line vote.

“We have a primary obligation for that primary document to do the verification that would be required for a drivers license or an identification card,” said Sen. Steve Newman (R-23), explaining his vote to kill the bill. “We heard from our State Police that is not doable, and it’s certainly not doable under this bill.”

Supporters of the effort to grant driver’s licenses to undocumented immigrants flooded the General Assembly building, packing the committee room beyond capacity. Earlier in the day, they staged a press conference to explain why they believe the bill would increase safety and help people on the margins of society. They said many families struggle with medical visits and shuttling children to appointments without the use of an automobile.

“This is a matter of life and death,” said “Beatriz American, vice-chairwoman of the Virginia Coalition of Latino Organizations. “We have had cases of people pleading for drivers licenses because somebody in their family is sick with cancer but they cannot take them to treatment.”

Opponents say granting driver’s licenses to undocumented immigrants would be granting them a status they don’t deserve.

"Why should we issue a legal ID to someone who is here illegally? It’s wrong,” said Prince William County Board of Supervisors Chairman Corey Stewart, who made a name for himself by cracking down on undocumented immigrants. “The state should not be complicit in helping people who are here illegally and breaking U.S. law.”

Despite the vote, advocates for undocumented immigrants vowed to press ahead.

“This is a need in our community, and we are going to be fighting until we get drivers licenses,” said Edgar Aranda, chairman of the Virginia Coalition of Latino Organizations. “This is a long journey, not a short journey.”