A Farewell to Landmark Mall
Votes

A Farewell to Landmark Mall 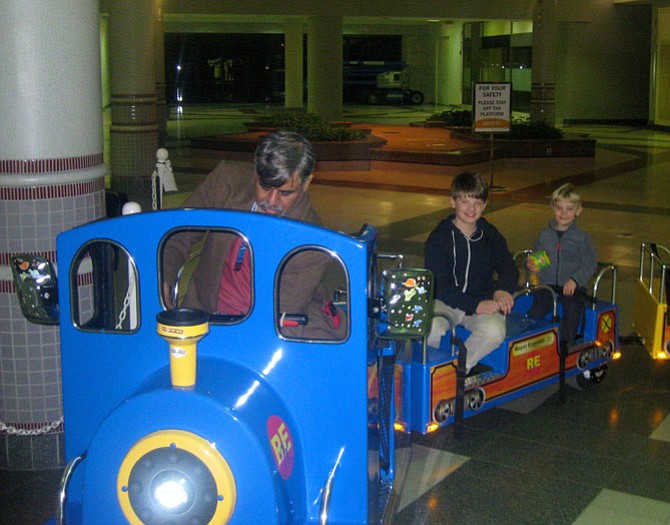 Tariq Kahn drives the train at Landmark Mall, carrying Sawyer and Max McElhatton. The photo was taken one day before Khan must leave the mall on Jan. 30. Photo by Jim McElhatton

Hailed as the largest shopping center in northern Virginia when it opened in 1965, Landmark Mall was set to close on Jan. 31 long after most chain stores fled. “Never again,” one shopper took to Yelp to complain of the mostly vacant mall. Wrote another, “As soon as you step into the mall, you'll feel so empty and desolate …"

But if you walked past the dozens of shuttered storefronts, if you talked to the few merchants who remained, you might have felt something else, too: hope. You’d meet people like mall convenience store owner Dessalgne Tiruneh, who came to the United States as a refugee from Ethiopia more than three decades ago.

Tiruneh never could have afforded space in other malls, but the high vacancy rates meant low rents. When just about everyone else gave up on Landmark, these merchants — many of them first generation immigrants — kept the place alive, even if just barely. Landmark was more than just a dying mall to them. It was a place to plant their dreams and for small businesses to take root — a story of immigration and renewal as old as the country itself.

For his part, Tiruneh said he earned a college degree after coming to the United States. He made a good living until he was laid off from an accounting job in 2009. One day, he stopped by the mall and struck up a conversation with convenience store cashier Enku Shiferaw. She, too, came from Ethiopia. They hit it off. Before long, they married. In October, the newlyweds took over running the store — just in time for the mall to close.

Another Landmark business owner, Tesfahun Getu, opened his Ethiopian Twice business back in 2007, selling custom made Ethiopian jewelry and clothing.

“You have to work hard and promote it,” he said, when asked how he could have managed to stay afloat with such little foot traffic. “The complaint I hear all the time is Landmark is a dead mall, but we promoted it and gave it life.”

Getu said he relentlessly promotes his business online, through social media and word of mouth. “I always knew it was going to close sometime,” he said. “I just never knew when.”

It’s true Landmark was a big, lonely place over the last few years, but I never found it depressing thanks to another start-up Landmark business run by Tariq Kahn, who came to the United States in 1995 from Pakistan. He ran the Khan Express, a small electric train that zipped all around the mall transporting customers for $4 per ride (which sounds steep until you learn the train cost him $20,000).

My 3-year old son and I were frequent and loyal passengers for whom a ride on the Khan Express marked one of life’s great and simple joys. Unfettered by foot traffic, Khan delighted in making each ride memorable, zigzagging around poles and spinning his little train around in tight circles in front of deserted stores (and you just can’t get service that like at Tyson’s).

On a recent day, however, Kahn seemed down. He had about a week left on his lease before the mall closed to make way for a big redevelopment project. He slumped, leaning on the little wooden podium next to his parked train. There were no passengers in sight.

Over the years, Khan has held jobs in food service and sales. Before starting the Khan Express 18 months ago, he worked as a security guard. Most of the nearby malls already have trains, and Kahn can’t keep his running on occasional birthday parties alone. “Otherwise, it’s back to any job I can get,” he said.

Back at his convenience store, Tiruneh said he, too, is disappointed. His wife, Enku, said she’s enjoyed running the business, but wishes the mall would stay open a little longer and that merchants received more than one month’s notice to vacate.

But Tiruneh said he’s been through worse. He doesn’t want to look back. He fled Ethiopia 34 years ago as a refugee. When asked why he came to the United States, he paused. Under his breath, almost in passing, he said, “I didn’t want to be assassinated.”

“I escaped,” he said. “I survived. I live in America now. God bless America.” Jim McElhatton is a freelance writer who lives in Alexandria. He can be reached at jimmcelhat@gmail.com, or on Twitter at @Jim_McElhatton