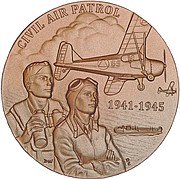 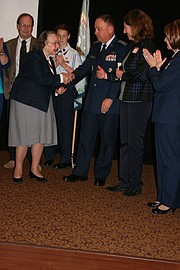 “We discovered each other after a Twilight Tattoo event of the U.S. Army at Fort Myer-Henderson Hall this summer,” said 1st Lt. Bebe Finkenstaedt, Challenger I Cadet Squadron Commander. “Our squadron was wearing our Air Force Blues uniform and Libby came up to us and began talking about her CAP start. One member said, ‘You deserve an award for that.’”

According to historian Col Frank A. Blazich, Jr., any individual who served in CAP from Dec. 7, 1941 to Sept. 2, 1945 warranted recognition so as to not single any one individual out. Haynes, based on her time as a CAP cadet, qualified. She joined in 1942.

It is not the first instance of an organization being awarded the medal, says Blazich. “But in this instance the importance lies in the recognition by Congress of the civilian volunteers who gave their time, money, careers, and in 68 cases, their lives for the defense of the homeland.”

The Congressional Gold Medal is a recognition of their sacrifice afforded by the federal government.

Haynes’ cadet training confirmed her interest in aviation, an interest she’s had since age 6. “Joining the Air Force was a compulsion for me,” Haynes said. “It was so strong like a calling.” While at MIT studying meteorology, Haynes soloed her plane “Firebird” to and from school and later became a flight forecaster. She briefed pilots on the weather they could expect on their flight and signed their clearance.

“She really did break barriers for women in her day,” said daughter Mary Haynes Miller. “She is yet another capable intelligent woman that hasn’t let her gender stop her. She could figure out anything. She has a powerful mind and is not afraid to use it.”