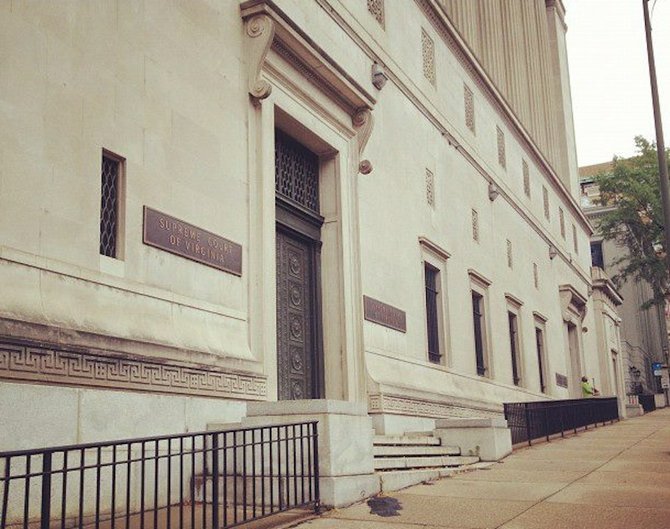 Starting this year, members of the public will finally have access to audio recordings of oral arguments. The recordings were once public, but installation of new recording equipment in January 2008 changed that. As the Alexandria Gazette Packet first reported last summer, justices instituted the blackout policy because they were concerned their sidebar conversations between justices might be audible.

"That was a lame excuse," said Del. Dave Albo (R-42). "I'm glad they decided to change this without the General Assembly passing legislation to make it happen."

As it turns out, legislation was already in the works. Prompted in part by the Gazette Packet's report, Wise County Clerk of Court Jack Kennedy approached Del. Terry Kilgore (R-1) about introducing legislation requiring the court to release audio recording of oral arguments. Draft language for House Bill 1018 said audio records of Supreme Court oral arguments "shall be made publicly available in electronic format without fee within a reasonable time after oral arguments take place."

"I'm a Democrat and he's a Republican," said Kennedy, who lives in Kilgore's district. "But transparency should not be a partisan issue."

THE LACK OF TRANSPARENCY in Virginia has been a problem for many years, and the commonwealth has recently gained a reputation as a place that is hostile to open government. In 2012, the State Integrity Investigation ranked and graded each of the 50 states on government accountability, transparency and corruption. Virginia got an F, largely because police agencies deny access to basic documents. This week, Richmond-based Open Law Virginia issued its own state-by-state guide comparing public availability of online documents. Virginia got a C minus, largely because many documents and files are difficult for members of the public to access.

"Access to live and recorded oral arguments creates opportunities for civic education and public engagement," the report concludes. "And even many judges have recognized, in part based on experience, that it is time to bring video coverage to appellate courtrooms routinely."

When the court's policy of denying public access became public last year, leaders at the Supreme Court initially decided to defend the policy. In a written statement explaining the lack of transparency, director of legislative and public relations for the Office of Executive Secretary Katya Herndon said new technology was to blame.

"The new digital recording equipment is more sensitive so that the recordings now include any confidential comments any justice makes to another justice during the oral argument," said Herndon last June. "Accordingly, the recordings, which are for the internal use of the justices, are no longer made available to the public."

SINCE THAT TIME, a number of media outlets have reported on the lack of transparency including an editorial in the Roanoke Times. And legislators began drafting bills to force the court to open up. Now, the court has decided to change course — at least for oral arguments moving forward. Advocates for open government say it's a victory for the public.

"We can't have secret courts," said Ginger Stanley, executive director of the Virginia Press Association. "The public has a right to hear these audio records. That's how democracy works."