Eight years of negotiation coming to a dramatic conclusion on the waterfront. 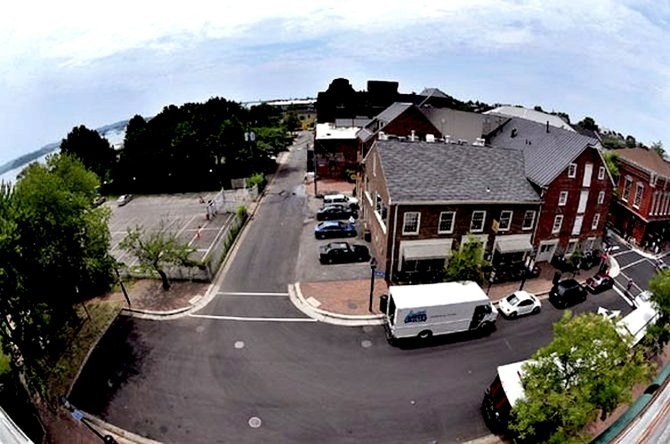 The waterfront plan calls for the elimination of the Old Dominion Boat Club parking lot at the foot of King Street, where city leaders want to create a public plaza. Photo by Louise Krafft. 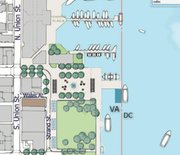 The waterfront plan calls for a new public plaza called Fitzgerald Square to be constructed where the Boat Club's parking lot now stands. 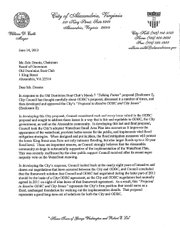 City officials and elected leaders are considering using the power of eminent domain to accomplish its goals on the waterfront if members of the Old Dominion Boat Club reject their latest compromise. After eight years of negotiation and debate, Alexandria Mayor Bill Euille wrote a letter offering an ultimatum: Cut a deal or face the consequences.

"One of the considerations is potential litigation," said Deputy City Attorney Chis Spera. "Eminent domain is one of the possibilities, but ultimately that's going to be a public process. The City Council is going to have to vote on whether they want to go forward with eminent domain or anything else."

At issue is the club's parking lot at the foot of King Street, a point of disagreement between city leaders and Old Dominion members for decades. Recommendation 3.72 of the waterfront plan calls for the city to "pursue eliminating the ODBC parking lot along The Strand, preferably through negotiation with the ODBC." Since zoning for the waterfront plan was adopted earlier this year, city officials have been engaged in ongoing negotiations to make that recommendation a reality. Now those negotiations seem to be reaching an end game.

"In developing this last and final proposal, council took the city's adopted waterfront small-area plan into account as it improves the appearance of the waterfront, provides for better access for the public, and implements vital flood mitigation strategies," wrote Euille in a June 14 letter to the boat club.

THE WATERFRONT PLAN has long been a source of disagreement in Alexandria, prompting a series of legal challenges that are still making their way through the court system. Although much of the attention has been the three sites slated for redevelopment, another part of the plan calls for eliminating the club's parking lot, which is located on the site of a historic wharf that dates to the earliest days of the city.

"The elimination of the parking lot creates the opportunity for a major new public space between the Fitzgerald warehouse and the water," according to the plan. "This would open up continuous public access along the waterfront and increase the amount of public space at one of the most important locations on the waterfront."

Now city leaders are ready to cut a deal. If boat club members agree to reduce the size of the parking lot to 11,500 square feet, the city would construct a public plaza along the Strand side of the lot. City officials want boat storage to be moved to an off-site storage facility, but boat club leaders have resisted that idea. Many members question the idea that the club should cut a deal with city leaders at all.

"I don't see any reason to give the city anything," said Townsend Van Fleet, a boat club member who ran against Euille in 2003. "We had a lawsuit with the feds for more than 30 years, and the land was awarded to the boat club. And now the city comes along and wants to take parts of the same land that we fought over with the feds."

WHEN MEMBERS of the boat club were buzzing about negotiations between the club and city leaders, Van Fleet called assistant city attorney Joanna Anderson and asked for a copy of the city's proposal. The city attorney's office interpreted the request as a Freedom of Information Act and began processing the order. Instead of responding specifically to Van Fleet, city leaders eventually determined that they should make the document available to the entire community rather than merely respond to one request.

"Had this been communication between attorneys, it would not have been FOIAble," said Sperra. "But at some point in the proceedings, the boat club requested — and the mayor agreed — to just have discussions between principals."

Now city leaders are in the awkward position of conducting a public negotiation with the boat club, even as members consider the city's final offer before possibly using eminent domain to take the parking lot. So far, the club has not yet responded to the request. But members of the club have a long history of rejecting offers from the city, and tensions over the waterfront plan linger at the waterfront club. That means that members of the Alexandria City Council are likely to consider eminent domain in a closed-door executive session this fall.

"Eminent domain is something that should be very rare. The classic example is President Eisenhower using it to build the interstate system," said Vice Mayor Allison Silberberg. "This is not the interstate."

THE POLITICS of eminent domain could pose a serious challenge for council members, whose term ends in 2015. Last year, voters approved an amendment to the Virginia Constitution allowing land owners to seek damages from local governments if they can prove a loss of profits or a loss of access. In this case, the Old Dominion Boat Club could seek damages for the loss of profits on parking spaces it owns adjacent to Mai Thai restaurant — across the street from the parking lot.

"While it certainly isn't perfect, it's a huge improvement over the previous text," said Ilya Somin, professor of law at George Mason University. "It can no longer be said that Virginia's state constitution is one of the worst in the country in protecting property rights against eminent domain."

"We are going to look at all the options," said Councilman Justin Wilson. "My preference would be a negotiated settlement."