Northern Virginia Democrats Spoiling for a Fight Against Republican Incumbents

13 first-time candidates ready to take on incumbents across the region. 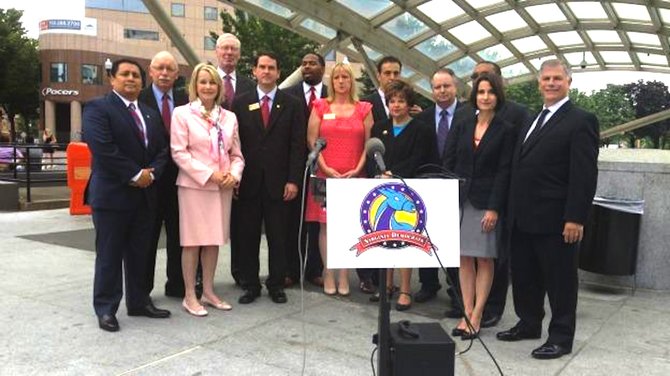 He may be taking the summer off from his role as host of the Daily Show, but Jon Stewart is playing an important role in the Democrats’ campaign for the House of Delegates this fall. During a press conference at the Clarendon Metro station this week, Democrats said it was time for Virginia to stop being a punch line in late-night television jokes about transvaginal probes and voter identification.

"Society is changing," said Del. Mark Sickles (D-43). "Younger people are more open, very open to our messages, and they will not countenance the kind of governing we've had here in the last few years."

Sickles acknowledged Democrats are unlikely to gain the 19 seats they would need to win to retake the majority in the House of Delegates. But he also said his party was willing to play the long game, challenging the Republicans over the long term on issues such as immigration and gay rights. Meanwhile, Arlington Del. Alfonso Lopez (D-49) said he was hopeful that Democrats might be able to pick up four Republicans seats, which would give his party one more seat on every committee.

IN RECENT YEARS, Virginia has become a swing state. Voters have chosen Democrat Barack Obama for president and Republican Bob McDonnell for governor. But the likelihood of Democrats winning in even years is much better, while Republicans are favored to win in odd years. That means the Republicans are likely to keep the majority in the House of Delegates this year, even though Democrats are eager for a fight.

"The Democratic playbook in Virginia right now is largely about social issues," said Kyle Kondik, analyst with the University of Virginia Center for Politics. "And Republicans have certainly given them ammunition."

But Virginia is a tale of two commonwealths. Although Republicans dominate the House of Delegates, Democrats rule in Northern Virginia. Republicans are not fielding any candidates at all in Alexandria or Arlington, leaving those races to the Democratic incumbents and third-party challengers. Republican leaders in Northern Virginia say they tried to recruit candidates, but had a hard time finding people who were willing to put their reputations on the line.

"I honestly think this is to the detriment of the citizens of Virginia," said Tom Fulton, chairman of the Alexandria Republican City Committee. "The strength of democracy is the power of choice, and to have a choice allows you to exercise that choice but in this instance there is no choice."

THE 13 DEMOCRATS who appeared at the Clarendon press conference will be taking on Republicans incumbents across Northern Virginia, though. That means taking on entrenched powers and the institutional money that comes with the privilege of holding office. Democrats believe that Republican efforts to limit reproductive freedom and voting rights will be a way to appeal to voters.

"Virginians are very proud, and they don't like to be on late-night television," said Traci Dippert, a teacher in the Rappahannock County school system who is challenging Del. Ed Scott (R-30) of Culpepper. "They see jobs, the economy and infrastructure as the important issues, not going after women's health care."

One policy idea that was floated during the Clarendon press conference was extending the Yellow Line past the Huntington Metro station down the Richmond Highway corridor to Fort Belvoir and perhaps beyond. That's a controversial idea, even among Democrats — some of whom believe that increasing density along the corridor would be detrimental to the existing communities there now. Lee District Supervisor Jeff McKay, a Democrat, has opposed the idea while Del. Scott Surovell (D-44) has been one of the chief proponents. Now Democratic candidate Michael Futrell said he wants to make the issue a central focus of his campaign.

"There's no idea that we could come up with that 100 percent of the people will agree with," said Futrell, who is running against Del. Mark Dudenhefer (R-2). "But if you knock on doors and you start talking to constituents, you will find that an overwhelming number of people want this."