Voters to determine if they like recent direction of city or not. 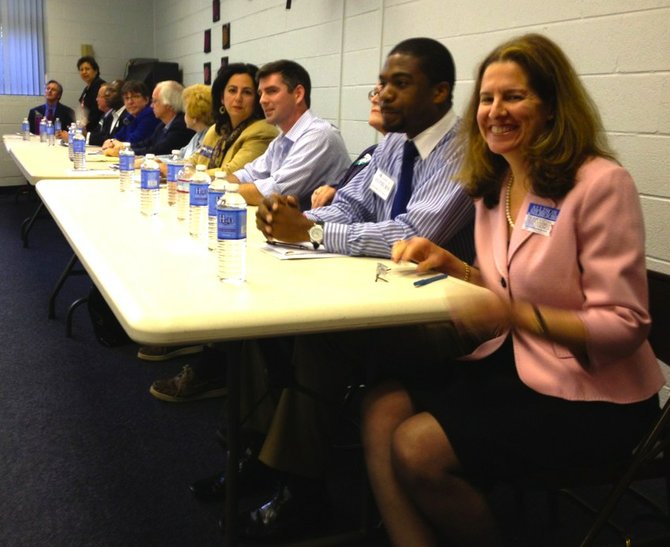 All 14 Democratic candidates appear at a forum earlier this month at Cora Kelly Recreation Center. Photo by Michael Lee Pope.

Where Do They Stand?

Are voters pleased with the direction of the city? Or are they looking for a new set of leaders?

That will be the central question for the Democratic primary on June 12, when voters will select six candidates that will appear as the party’s slate for City Council in the November election. Issues surrounding growth and development have created the strongest divisions among the candidates, and voters will be presented with a clear choice.

“This is not a monolithic field,” said Dak Hardwick, chairman of the Alexandria Democratic Committee. “Voters want choices, and they’ve got it in spades with these candidates.”

CANDIDATES RANGE in age from 29 to 74. Some have lived in Alexandria their whole lives while others have only recently arrived. Two are incumbent City Council members who are seeking to return to office. Two are former City Council members ousted in the last election in search of a comeback. One is a School Board member. Another is a Planning Commission member. Seven are first-time candidates. All of them are vying for a spot on the ticket in a campaign unlike any other in recent history.

For many years, the party’s slate has been chosen by a firehouse caucus — a single location where voters were asked to sign a loyalty oath before casting a ballot. Critics said the process was exclusionary, narrowing participation to a set of 2,000 party insiders. This year, the rules have changed. All 26 of the city’s primary will be open from 6 a.m. to 7 p.m. Registrar Tom Parkins is expecting a turnout closer to 12,000 voters — six times the number of voters who participated in the firehouse caucuses in recent years.

And then there’s the sheer number of candidates. With 14 candidates seeking six seats, that means more than half of the candidates will be unsuccessful.

“I can’t remember a time when we have had this many Democratic candidates,” said former Sen. Patsy Ticer (D-30). “It’s a lot of people to keep track of.”

ON THE ISSUES, candidates have staked out positions that have created two major slates. One supports recent decisions on the waterfront and Beauregard, for example. This slate includes the two current incumbents and the two former incumbents as well as several first-time candidates. When asked about their support for these hot-button issues, candidates who support the status quo say the city has taken a responsible position of negotiating with developers to get them to pay for transportation infrastructure and dedicated units of affordable housing.

On the other side of that divide is a set of candidates offering a challenge to the status quo. These candidates oppose the incumbents on the waterfront and Beauregard, as well as a handful of other recent decisions. This slate of candidates says Alexandria has lacked a vision, creating a scattered sense of priorities that leaves many feeling that they haven’t been a part of the process. Several of these candidates have suggested that developers wield too much power in Alexandria, and they have offered to stand up to powerful interests if elected.

“You should ask yourself who is asking the tough questions and who is reading the plans,” said Arthur Peabody. “When it comes to Alexandria’s future, we need to ask tough questions.”