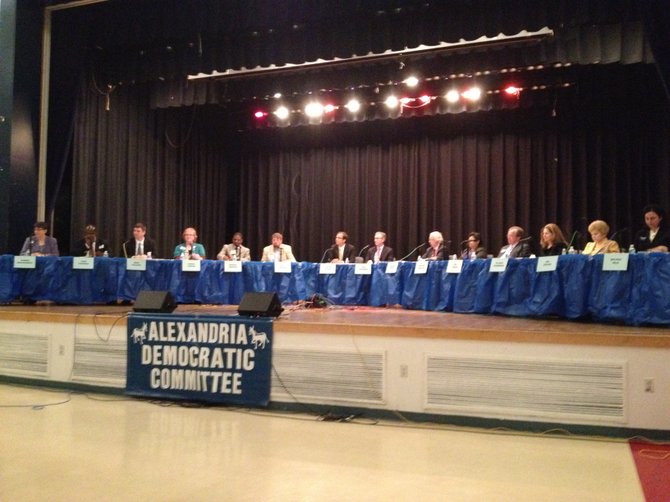 All 14 candidates participate in a forum last week hosted by the Alexandria Democratic Committee. Photo by Michael Lee Pope.

Alexandrians for a Livable City

Democrats for a Better Alexandria

With four weeks until the Democratic primary for Alexandria City Council, the city’s Democrats are forming opposing factions in the hotly contested race. A handful of political action committees have emerged in recent days to support rival slates of candidates, adding to the heat of competition among the 14 Democrats seeking six seats. The leading point of distinction between the factions is the scale of density the city should allow. From the waterfront to the West End, candidates in the Democratic primary are drawing clear battle lines that will give voters a stark choice on June 12.

On one side of the spectrum is Securing Alexandria’s Future, a new political action committee that endorsed a slate of six candidates this week. Its leaders include former Councilman David Speck, outgoing Councilman Rob Krupicka, businessman Murray Bonitt, Waterfront for All founder Gina Baum and former Police Chief David Baker. For the most part, their slate of candidates supports the scale of recent controversial development plans. On Tuesday, the committee formally endorsed John Taylor Chapman, Sean Holihan, Tim Lovain, Del Pepper, Paul Smedberg and Justin Wilson.

“These candidates have demonstrated a broad interest in all facets of our community,” said former Councilman Lonnie Rich, who is also affiliated with the PAC. “More importantly, they have balanced views on how to move our city forward. We also believe they have the personal qualities necessary for collegial action on the city’s business.”

At the other end of the spectrum is Alexandrians for a Livable City. Its members include people who have been critical of recent developments, including Katy Cannady, Lynn Bostain, Robert Pringle and Ginny Hines Parry. They endorsed a slate that has consistently opposed the proposals, including Victoria Menjivar, Sammie Moshenberg, Arthur Peabody, Allison Silberberg and Boyd Walker.

“None is an incumbent or past member of the council,” the committee said in a written statement endorsing the slate. “That reflects our strong belief that Alexandria needs new leadership.”

Adding their voice to the chorus of PACs the week is Virginia New Majority, the political wing of nonprofit Tenants and Workers United. Led by former Tenants and Workers director John Liss, the group also endorsed a slate of four candidates this week: Menjivar, Moshenberg, Peabody and Wilson. In a statement announcing the slate, Liss said the Virginia New Majority slate was chosen because the candidates expressed a “clear intention” to foster “economic security” in Alexandria by defending workers rights and ensuring Alexandra’s immigrant communities are able to thrive.

“These candidates are all strong campaigners for a more inclusive and participatory Alexandria,” said Liss, who recused himself from voting in the selection because he is married to candidate Victoria Menjivar. “Alexandria needs champions of working families that will put the needs of people first, and these four candidates will do just that.”

Democrats for a Better Alexandria may have started the trend. Months ago, prominent Democrats Jack Sullivan and Dorathea Peters began talking about forming a group and announcing a slate of candidates. The other PACs emerged since then, indicating deep divisions among Alexandria Democrats. In a press conference at the Royal Restaurant earlier this month, Democrats for a Better Alexandria endorsed a slate of candidates that tried to bridge the divide between candidates who support recent development proposals and ones who have been critical. Their list of six candidates is Chapman, Lovain, Moshenberg, Peabody, Walker and Wilson.

“We were looking for candidates with intellectual heft,” said Rod Krukro, a member of the PAC. “And we wanted to make sure they had diverse backgrounds.”