Former Navy pilot hopes to defeat Moran with charges of conflict of interest.

Election Day is in November. Photo by Michael Lee Pope. 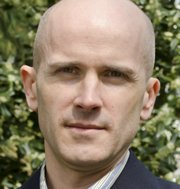 A native of Amsterdam, N.Y., Shuttleworth grew up in Severna Park, Md. He has a bachelor of science in history from the Naval Academy and a master of businesses administration from the Harvard Business School. He was in the Navy from 1983 to 1995, stepping down as a lieutenant. He is currently a strategy management consultant and was formerly employed by the Boston Consulting Group.

Former Navy pilot Bruce Shuttleworth’s campaign to oust U.S. Rep. Jim Moran (D-8) in the Democratic primary is fashioned as an indictment, a campaign in which the issues are framed as an attack on the incumbent. The first-time candidate hopes to knock off the 10-term congressman by describing him an insider who uses his power to help campaign contributors and himself.

Supporters of Moran say these kinds of charges are nothing new, and the same accusations are resurrected every election cycle. They say candidates have to raise money to get elected, and that the congressman is an experienced legislator who votes his conscience. Several said that if Moran was known as a legislator who votes in favor of contributors he would have raised a lot more than $600,000, the amount of money he’s raised and spent so far in this election cycle. Ultimately, they say, voters have considered these charges and dismissed them.

“Voters in the 8th District know Congressman Moran,” said Austin Durrer, a spokesman for the congressman. “He fights for the issues they care about, provides strong, progressive representation, and has helped strengthen the region’s economy through his work as a senior member on the Appropriations Committee and as a leader who understands the importance of the federal role in our regional economy.”

Supporters of the project say it’s important to consider the cost ramifications of eliminating the project, which some people call “the alternative engine.” They say that the military would have benefited from improved engine performance, increased contractor responsiveness and enhanced operational readiness while sustaining an industrial base for future aircraft programs.

“In Econ 101, you learn that competition brings down costs,” said Durrer. “In this case, having an alternative engine would have saved taxpayers more than $20 billion over the life of the F-35 program.”

ANOTHER ISSUE where Shuttleworth would have voted differently than Moran is the 2005 bankruptcy reform. Shuttleworth criticized the law as making it harder to declare bankruptcy, preventing people from getting a fresh start. He described the law as a “big win” for the credit card companies, repeating the charge that the congressman took a loan from credit card company MDNA in advance of the vote.

“Four days later, he cosponsored legislation to make it harder for citizens to declare bankruptcy, the very bankruptcy he avoided by taking that sweetheart loan,” said Shuttleworth. “So there’s another example of having an extreme conflict of interest.”

Moran supporters scoff at the idea that a 10.7 percent mortgage loan is a “sweetheart deal,” dismissing the idea that there was any relationship between the loan and the congressman’s support for the reform.

Shuttleworth also says he would have voted against the repeal of the Glass-Steagall Act, which he says helped contribute to the global financial crisis. Moran voted to repeal the act, and Shuttleworth says he would have voted to maintain a separation between investment banking and commercial banking. Because that was at the heart of the financial crisis, Shuttleworth says, Moran bears some of the responsibility for the downturn.

“Too many investment bankers are intent on getting those short-term bonus checks,” said Shuttleworth. “They take wild risk knowing that the downside is capped but the upside is not.”

IN A MEETING with Connection Newspapers reporters and editors, Moran pushed back on criticism of his actions during the height of the financial crisis. He criticized a book titled “Throw Them All Out” by Peter Schweizer, which reports that the day after a meeting between Secretary of the Treasury Hank Paulson and New York Federal Reserve Chairman Tim Geithner that Moran sold 92 stocks.

“The book says two things, and then you naturally assume there’s a connection. It doesn’t actually say I was at the meeting. I wasn’t. I never attended the meeting,” said Moran. “To suggest that you would make a decision based on some meeting is a little absurd.”