‘Held Hostage by VDOT’ in Alexandria

Locals among those stranded on I-95 during snowstorm. 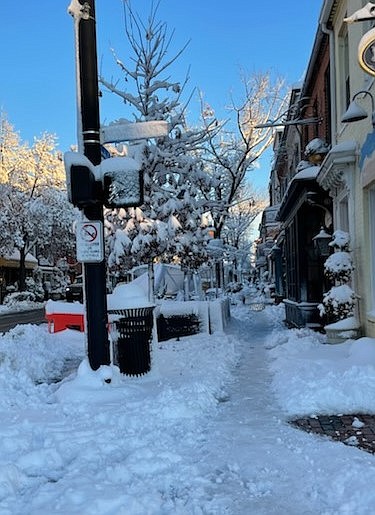 It was too good to last. The unseasonably warm temperatures over the holidays gave 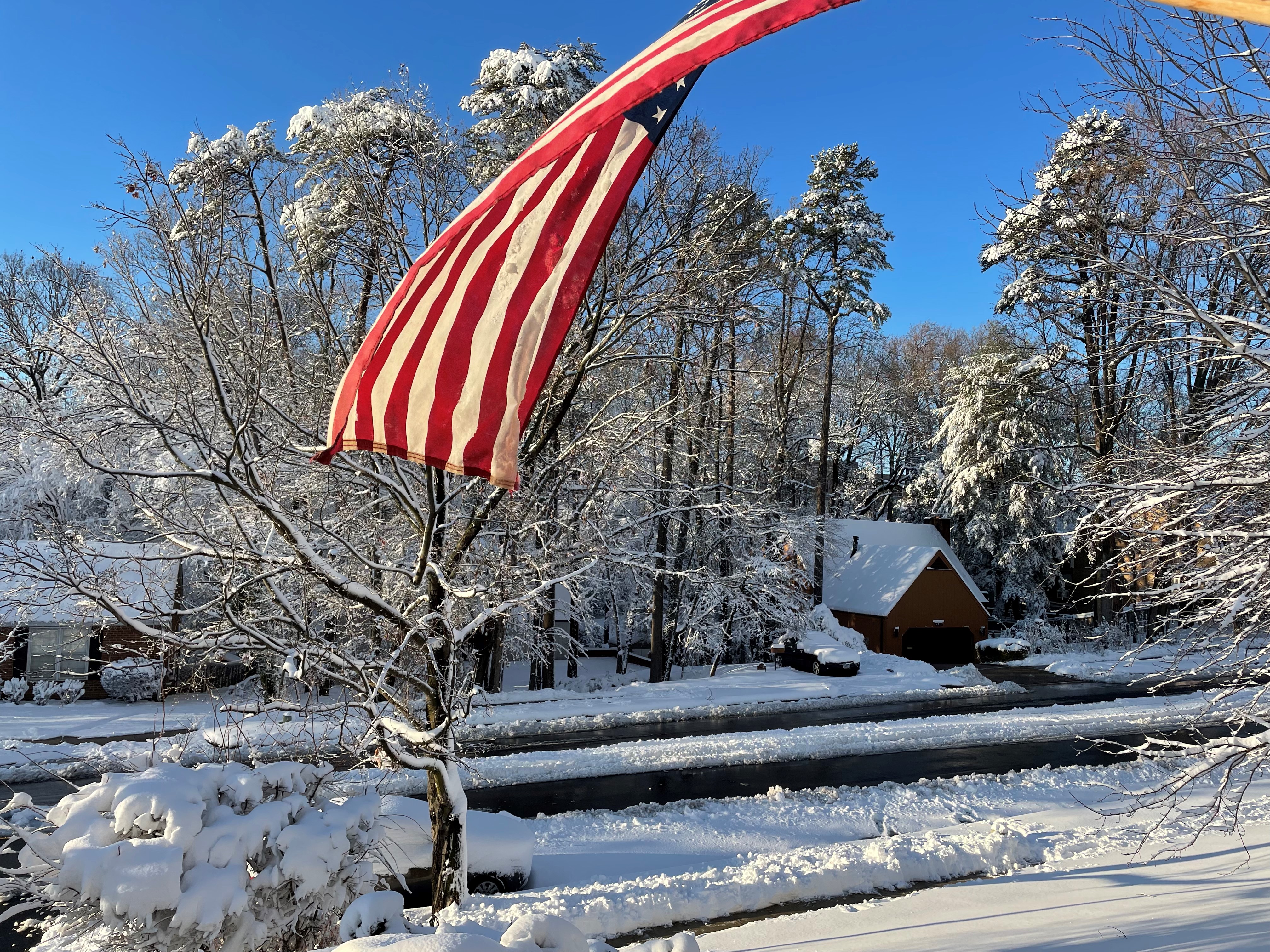 North Howard Street near Inova Alexandria Hospital is passable by late afternoon on Jan. 3.
way to the first snowstorm of the year Jan. 3, blanketing the region with up to a foot of snow and leaving hundreds of thousands without power as the weight of the precipitation brought down tree limbs and power lines across the city.

Nearly 400,000 households in Virginia were without power on Monday afternoon, according to PowerOutage.US. As of Wednesday afternoon, Dominion Energy was still working to restore power to 122 homes in Alexandria.

As residents and business owners began digging out of the deluge, some were still stuck on Interstate 95 as they tried to make their way home.

“I feel like I was being held hostage by VDOT,” said Jeanne Jacob, who was stranded for 18 hours just north of Fredericksburg as she and her husband Jerry were returning from a trip to Florida. “There was no leadership from the top. Governor [Ralph] Northam and VDOT were totally unprepared and not in control of this situation. They used no common sense to get people out of there.” 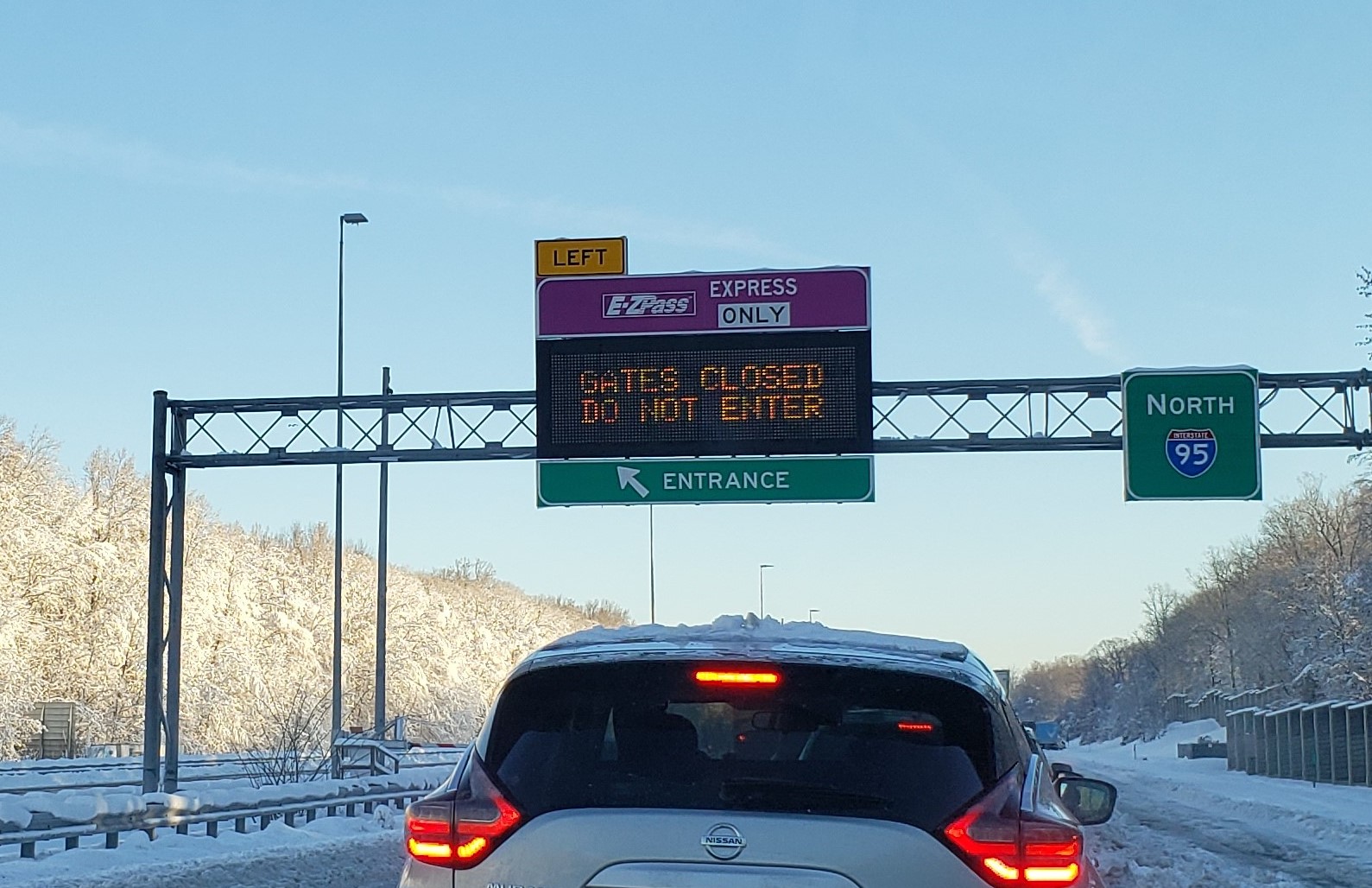 A sign on Interstate 95 indicating the closed Express Lanes during the snowstorm of Jan. 3.

According to Virginia State Police, a tractor trailer jackknifed on the interstate north of Richmond early Monday morning, triggering a chain reaction as other vehicles lost control.

“Governor [Ralph] Northam and VDOT were totally unprepared and not in control of this situation.”

— Alexandria resident Jeanne Jacob, stuck on I-95 for 18 hours

“Everybody was stuck trying to get off the exits,” said Frank Fannon, who spent more than five hours trying to return to Alexandria. “Some buses and trucks could not make it up the inclines and ended up blocking the exits so no one could leave the interstate.”

Lanes in both directions became blocked across a 50-mile stretch of I-95, but according to Jacob, there were no notifications to travelers on the situation either via roadway signs, emergency alerts or traffic broadcasts.

“North of Richmond we saw a sign that said there was an ‘incident,’ not accident, at exit 151,” Jacob said. “This was Monday afternoon. After that, there was nothing despite traffic being at a complete standstill from outside Fredericksburg. When there was enough cell service to receive text messages, friends from home were trying to keep us informed but by then we were beyond where we could exit the highway.”

Jacob grew frustrated as she saw the I95 express lanes cleared but unopened to vehicles.

“I called 911 and let the dispatcher know the situation – that the express lanes were clear and could VDOT please get them open,” Jacob said. “The response was that VDOT would not open the express lanes, so they sat there empty, cleared of snow, all night long.”

As evening descended, motorists began checking on other travelers.

“One man from Vermont put on his skis and was out checking to see if people were okay,” Jacob said. “People were walking their dogs and taking their kids out of the car in the freezing cold as they went to the bathroom on the side of the road.  Everyone knew they were in a pickle and tried to make the best of it but everyone was angry – ‘Where are the snowplows? Why don’t they open up the express lanes?’ This was a massive breakdown in service by the Commonwealth and absolutely inexcusable.”

Jacob said that around midnight, with no information and traffic still ground to a halt, motorists turned off their engines and tried to get some sleep. The first sign of relief came early Tuesday morning when news helicopters began circling overhead around 7 a.m.

“That was the first time we had some hope that the situation would finally get noticed,” Jacob said. “People got out of their cars and started waving to the helicopters so that this major crisis on I95 would finally get reported.”

It would take until 8:30 a.m. Tuesday before plows began clearing a single lane for vehicles to begin inching forward again. Jacob and her husband finally arrived at their Seminary Ridge home around 11 a.m.

“Our neighborhood looks like a war zone with several huge tree limbs down, including across our driveway,” Jacob said. “I am 74 and Jerry is 78 – we are two old people but bless our wonderful neighbors who shoveled a path to allow us to get into the house once we arrived. Now like everyone else we are dealing with the clean up after the storm.”

As of Wednesday morning, 95 percent of Alexandria’s primary roadways are now “passable”, according to the City’s Department of Transportation and Environmental Services. According to the city’s website, the high volume of downed trees and wires is preventing access to plow vehicles on several streets. These streets will be treated as soon as tree and wire hazards are removed.

The storm led to a two-day closure of the city government and virtual learning for Alexandria City Public Schools.

As for the I95 debacle that made international news, Kelly Hannon, a spokeswoman for VDOT, apologized to motorists and said the department would take an "exhaustive look" at the incident.

“That stretch of 95 is already arguably the worst in the state,” Jacob said. “A 50-mile meltdown during a predicted winter storm shows a total lack of leadership and accountability.”