All Fired Up
Votes 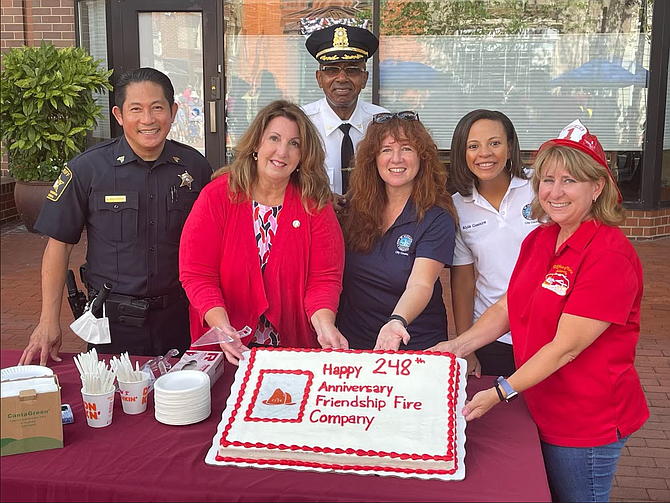 Now in its 26th year, the festival is sponsored by the Friendship Veterans Fire Engine Association and Historic Alexandria. Crowds enjoyed sunny skies as attendees learned about the city’s historic firefighting apparatus and checked out modern firefighting equipment on display.

“We had great attendance, beautiful weather, and lots of vendors,” said Gretchen Bulova, Director of the Office of Historic Alexandria. “We were able to show off three pieces of historic fire apparatus. And we had lots of families with dogs – it wouldn’t be Old Town if we didn’t have lots of people walking their dogs.”

On display at the festival, which takes place on the 100 block of South Alfred Street, was the Friendship Fire Company’s 1851 hand-operated fire engine, which is now headed out for conservation treatment. Also on exhibit was Friendship’s newly restored 1858 hose-reel carriage, an ornate apparatus made by local craftsman Robert F. Prettyman.

The Friendship Veterans Fire Engine Association (FVFEA) is now a philanthropic organization focusing on fire-fighting history and fire safety.  It remains active in community events, including the annual Festival, and supports historic preservation of the building and its collection.

“I have been participating in this festival for several years,” said Joyce Gregorio Esquig, an educational book vendor. “The festival gets bigger each year with all sorts of firefighting equipment and vehicles on display. I especially enjoy seeing all the kids who came out today.”