Reform Is in the Bag
Votes

Reform Is in the Bag 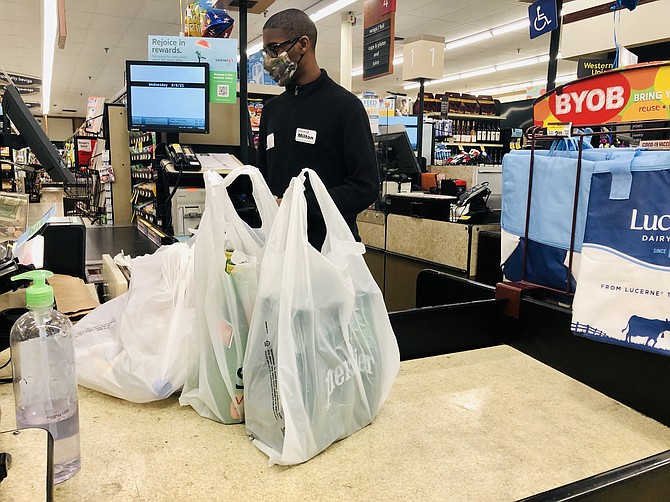 Next week, the Alexandria City Council will consider a new five-cent tax on plastic bags in grocery stores and convenience stores.

Alexandria started pressing for a plastic bag tax when George W. Bush was in the White House and Virginia was a red state. Now the years of advocacy have finally paid off, and state Sen. Adam Ebbin (D-30) has been able to pass a bill giving City Hall authority to impose a five-cent tax on each and every plastic bag that's used in grocery stores and convenience stores. If the Alexandria City Council gives the green light to the tax next week, the city is expected to pull in about $50,000 a year of new revenue for environmental programs.

"This isn't just about money from consumers," said Ebbin, who first introduced the bill more than a decade ago when he was a member of the House of Delegates. "It's more importantly about changing consumer behavior and reducing pollution, and I think we're on the road to the start of that."

"This isn't just about money from consumers. It's more importantly about changing consumer behavior and reducing pollution, and I think we're on the road to the start of that."

The City Council is expected to consider the plastic-bag tax Sept. 14 and then vote for final approval at the Sept. 18 public hearing, the culmination of more than a decade of pushing the General Assembly to give the city authority to tax plastic bags. According to the Earth Policy Institute, Americans use on average nearly one plastic bag each day. Although they're theoretically recyclable, most end up in landfills or littering rivers and beaches.

But grocery stores across Virginia are urging Alexandria and other local governments to hit the pause button.

"We would encourage any locality that is considering this tax to at least consider an implementation date of after the end of the COVID-19 pandemic," said Parker Slaybaugh, executive director of the Virginia Food Industry Association. "Our employees and our stores are doing everything possible right now to keep employees safe, to keep customers safe and to keep shelves stocked, and adding a new administrative burden such as a new tax could certainly hamper those efforts."

IF APPROVED, THE NEW TAX would apply to grocery stores, drug stores, convenience stores and large retailers that contain grocery stores. It would not cover restaurants that use plastic bags for takeout or dry cleaners that wrap clothes in plastic or pharmacists who use plastic bags for prescriptions. The Virginia Tax Commissioner will collect the tax, enforce the rules and distribute the money to local governments across Virginia. In the first year, retailers will get to keep two cents of the five-cent tax to help cover the cost of remitting the tax. After that, they'll get to keep one penny of the revenue and the rest will go to Alexandria City Hall.

"It's not a huge burden," said Ebbin. "And it's a small price to pay for not being complicit in pollution."

The Roanoke City Council was the first local government to take action under Ebbin's new law, approving a tax back in May. That prompted the Virginia Department of Taxation to publish guidelines because "grocery store" wasn't defined in state law. Those guidelines were published earlier this month, and now Fairfax County and Arlington County are also considering similar measures. Here in Alexandria, city officials estimate that the tax could pull in about $50,000 a year in new revenue for environmental programs.

"That $50,000 is kind of a rough estimate," said Helen Lee, Alexandria environmental program manager. "In reality, it's really going to depend on consumer shopping behavior. So there's not really a perfect number. That's our best guess estimate for now."

"They are a plague," said Lovain at the time. "The time has come to do something."

Advocates for taxing plastic bags had Republican allies in the state Senate, including Sen. Jeffrey McWaters (R-8) who famously wore a plastic bag fashioned into a pocket square on the Senate floor. The bill even had the support of Republican Leader Tommy Norment, but the effort was defeated in the much more conservative House of Delegates during the era of Republican control. Opponents of the plastic bag tax argued that imposing a new burden on businesses was a bad idea.

"We don’t live in California," said former state Sen. Bill Carrico (R-40), who voted against the bill when he was in the Senate. "There’s a lot of things that other states do that we don’t follow suit, and I think this is one that we should really take a hard look at. If we start doing this it’s going to put an undue burden on people."

WHEN DEMOCRATS SEIZED control of the General Assembly after the 2019 election, the effort to give local governments authority to tax plastic bags was at the top of the list. According to the law, money raised by the tax can be used for specific purposes: environmental cleanup, mitigating pollution, education programs and providing reusable bags to recipients of food stamps. If City Council approves the tax, it'll go into effect Jan. 1, 2022.

"D.C. has had a bag tax for more than a decade now, so I think a lot of residents are familiar with this tax," said Lee. "But unlike D.C., which taxes plastic bags for any retailer that sells food or alcohol — which includes restaurants — here in Virginia local governments can only charge the tax to grocery stores, convenience stores and drug stores."