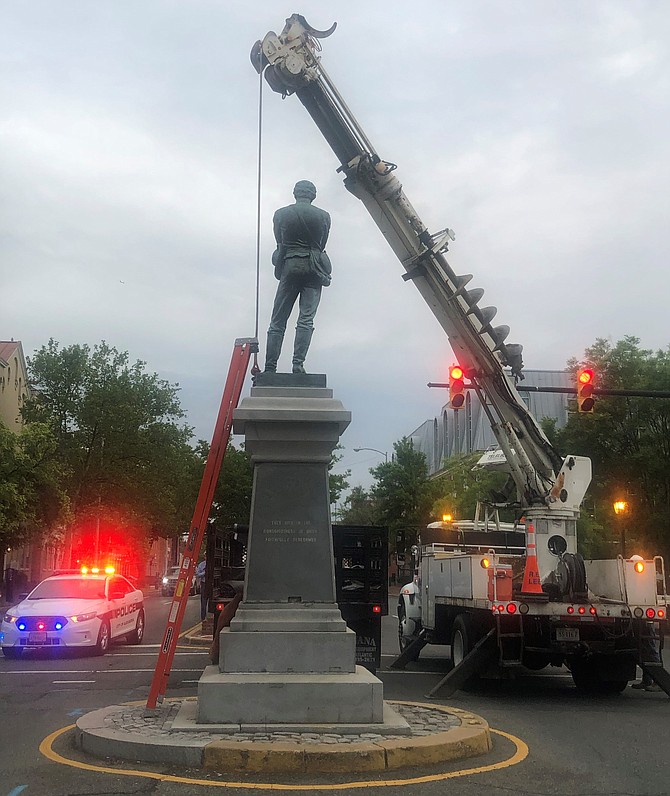 A crane maneuvers into place during the early morning hours of June 2 to begin the removal of the Appomattox Statue at the intersection of Washington and Prince streets. Photo contributed 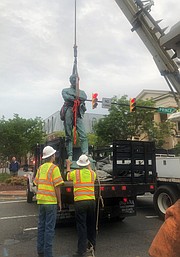 The Appomattox Statue is loaded onto a truck following removal from its base during the early morning hours of June 2.

For 131 years, the lone figure stood at the intersection of Washington and Prince streets in Old Town. Known as the Appomattox Statue, it was first dedicated in 1889 but in recent years has been the subject of heated controversy and legislative debate. Slated to be relocated next month, the statue was quietly removed during the early morning hours of June 2 to an undisclosed location by its owners, the United Daughters of the Confederacy.

“This is not an event that just occurred because of the moment we are in,” said Alexandria Mayor Justin Wilson. “This has been a long time coming through legislative change. This is a change that has a long history of advocacy in our community.”

The bronze sculpture by M. Caspar Buberl depicts the form of a lone Confederate soldier viewing his defeated comrades in the aftermath of the battle of Appomattox Court House. The stone base bears the names of those from Alexandria who died during the Civil War.

“[The removal of the statue] has to be put in the context of an overall effort,” Wilson said. “Part of what people are reacting to is the unequal telling of our history. In Alexandria, history is a big part of our city and a big part of what we are about. But traditionally we have only told a very small sliver of that history, only one perspective. The last two or three decades we have been working in a concerted way to broaden the scope of the history we are telling.”

The Appomattox Statue is unusual in that it is a privately owned statue located on public land. Following its dedication on May 24, 1889, the United Confederate Veterans, the organization that originally commissioned the statue, petitioned the Virginia House of Delegates that same year to have it protected by state law.

Although City Council voted unanimously in 2016 to move the statue to another location, prevailing law at the time required approval from the General Assembly for the relocation of the Appomattox Statue along with other war memorials throughout the state. A bill passed by the legislature and signed by Gov. Ralph Northam (D) earlier this year removed those protections, giving authority over memorials to local jurisdictions. That law goes into effect July 1.

“We had already coordinated with the UDC and scheduled a date for removal in July,” Wilson said. “They approached the city last night with a request to remove the statue early. That is probably a testament to the moment we are in right now.”

The base of the statue will be removed at a later date.

“This is the right direction for the city,” said Councilman John Taylor Chapman, former head of the Alexandria chapter of the NAACP. “There has never been a real discussion of how slaves contributed to building up the city, about the colored Union soldiers from Alexandria who fought in the war. Connect that with a glorification of the Confederacy and I ask ‘why aren’t we telling the real truth about the history of Alexandria?’ It’s concerning to me as an African American that our history wasn’t told. Only recently have we started to do that work.”

Technically the law allowing for relocation of the Appomattox Statue does not take effect until July 1, but Chapman said the city was not going to fight the UDC for its early removal.

“They knew this was coming down and used the current situation as an opportunity to move up the date,” Chapman said. “For me, it’s incredibly powerful to see that the statue is no longer there.”

Wilson said the city and the UDC had previously been in discussion on possible relocation sites for the statue.

“I met with the Daughters last year with the intention of working together on a mutually agreeable location,” Wilson said. “They made it clear they had a location selected but did not provide that information to us.”