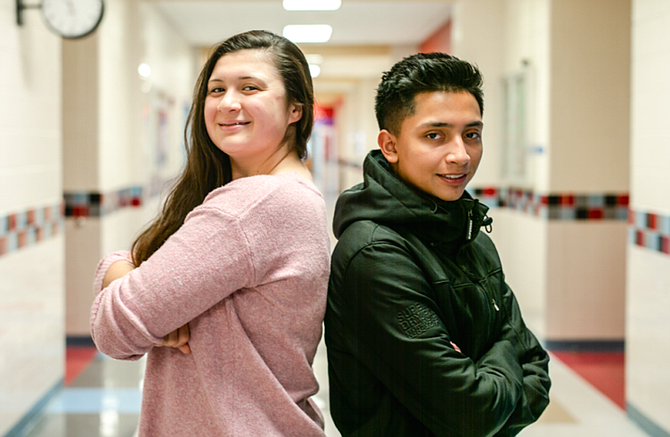 One evening last week, the pair stood on stage in front of friends and family at a D.C. theater, where they were formally awarded Posse Foundation scholarships worth $250,000.

Now, Wilmer Carranza and Madeleine Allen will head off to college this fall without having to give a second thought to tuition costs.

They were two of six T.C. students to make the final round out of tens of thousands of applicants from across the United States. Of those applicants, approximately 750 go on to receive scholarships each year.

Speaking of her reasons for applying, Madeleine said, “I thought, ‘You know, let’s go for it. Why not?’ I thought if I got it, that would be wonderful. Crazy, awesome, awesome opportunity. There was a lot of interviewing, it was intense. But it was definitely worth it.”

Wilmer, who will be a first generation college-goer, is an AVID (Advancement Via Individual Determination) student. He credits the support he received by being part of that group as critical in his academic success.

Each student expressed gratitude to the T.C. College and Career Center, whose staff have been with them every step of the way.

Madeleine will attend the University of Wisconsin-Madison in the fall and Wilmer is heading to Lafayette College in Pennsylvania. Both are looking to major in Computer Science.

“When I got the call to say I’d been successful, I was at my friend’s house,” said Wilmer.

Now, the 17 year-old, who is one of two T.C. student representatives to the School Board, and his family have had a chance to process the news.

His parents are “Very proud,” he said. “They were worried about the money. But now that I got the scholarship, we’re just relieved we don’t have to worry about that anymore.”

The Posse Foundation has been distributing tuition scholarships through partner colleges for thirty years and recruits from high schools and community groups from ten major cities across the United States, including D.C.

The non profit was established to identify future leaders. The organization groups students together in a “posse” of around ten who all attend the same college or university.

Their belief is “that a small, diverse group of talented students — a Posse — carefully selected and trained, can serve as a catalyst for individual and community development.”

"We are thrilled for Wilmer Carranza and Madeleine Allen who are worthy recipients of Posse scholarships. They are exemplary students who have worked hard for everything they have achieved at T.C. Williams. This year, we had six students make the final round of this prestigious nationwide scholarship program which in itself is an incredible feat. We are very proud of them all.”