‘The American Dream’ in Alexandria
Votes

‘The American Dream’ in Alexandria

Citizenship now a reality for 170 immigrants. 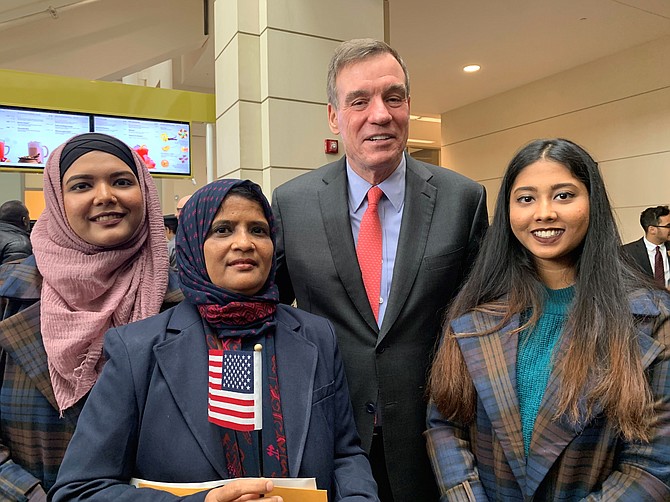 “I have been waiting for this day for almost two decades.” —Vinod Krishnkumar on becoming a naturalized American citizen 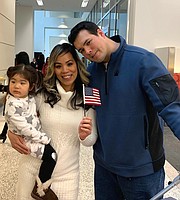 Asani Villa celebrates her American citizenship with her husband Sam and daughter Leia following the Jan. 31 Oath of Allegiance ceremony at the U.S. Patent and Trademark Office. 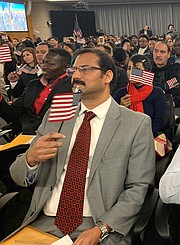 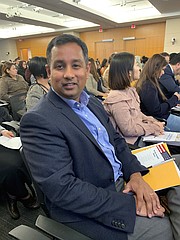 Vinod Krishnkumar, who immigrated from India in 2001, prepares to become a naturalized citizen Jan. 31 at the U.S. Patent and Trademark Office.

For nearly two decades, Vinod Krishnkumar had been waiting for this day to come. It was a day his father in India dreamed about but never got to experience for himself: On Jan. 31, Krishnkumar was among 170 individuals from around the world to take the Oath of Citizenship during the United States Citizenship and Immigration Services naturalization ceremony at the U.S. Patent and Trademark Office.

“I came to this country in 2001 to go to grad school,” Krishnkumar said. “I was able to get a work permit and worked my way to become a U.S. citizen. My father never had this chance so it makes me proud to be here living his dream.”

Sen. Mark Warner (D-Va.) delivered remarks during the ceremony, which took place in the Madison Building of the USPTO.

“Our communities are made stronger by immigrants from diverse backgrounds,” Warner said. “I’m honored to be a part of this important milestone for the 170 new U.S. citizens as they begin their new civic responsibilities to the Commonwealth and the nation.”

Warner congratulated the new U.S. citizens as they recited the pledge to support and defend the Constitution. According to USCIS, approximately 650,000 to 750,000 immigrants are sworn-in as U.S. citizens each year with nearly nine million lawful permanent residents eligible to apply for U.S. citizenship.

As Senator, Warner has championed comprehensive immigration reform and previously voted in favor of bipartisan immigration reform that would offer a path to citizenship for millions of undocumented immigrants already living, working and paying taxes in the United States.

“This is a great feeling,” Krishnkumar said. “This is something I have always wanted to do and something my parents wanted me to do. It is the American dream.”