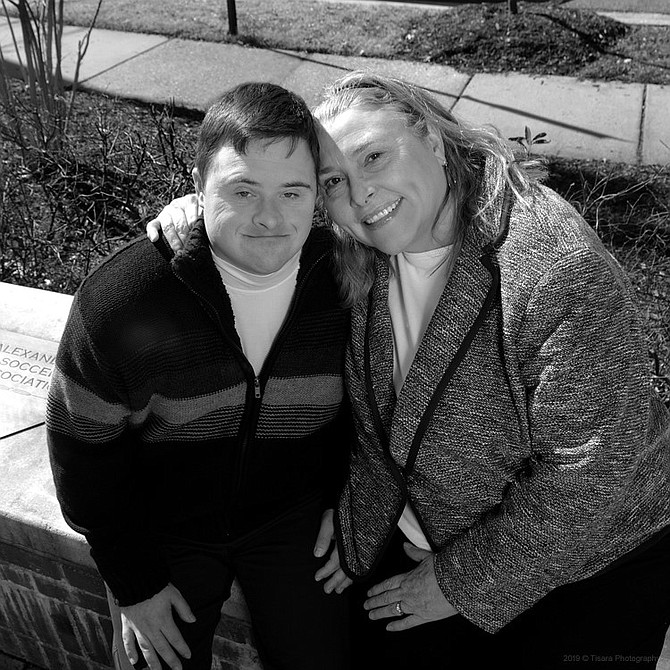 Carol Bailey has devoted her life to improving the lives of those with special needs. It started when she refused to let her 2-year-old son, Ryan, take the school bus to John Adams Elementary School until they installed seat belts in the bus. She says John Adams was the only school in Alexandria at that time that fit Ryan’s needs in special education.

Her efforts to support Ryan’s special needs continued up through high school at T.C. Williams. She remembers the high school wanted to get a life skills room. So, she helped raise money for the room to assist the challenged students to learn life skills like folding towels, making beds and cooking. Ryan graduated from T. C. Williams in 2011.

As a result of Ryan’s experience in the after-school program, Therapeutic Recreation, Carol became involved and eventually chaired the Therapeutic Recreation Advisory Council for over 10 years. During her tenure as chair, the Miracle Baseball Field and League were organized to provide a field for people with disabilities. It allowed wheelchair access to round the bases for softball and established Angels in the Outfield volunteers to assist players when they needed help. Carol says Ryan has a special bench named for him at the park.

Following the founding of the Kelley Cares Foundation in 2006, Ryan began participating in various fundraisers, including the Kelley Cares 5K runs. Carol pulls out a picture of Ryan, #22, who was running to raise money for Kelley Cares. “He raised a lot of money at that event,” Carol said. “Ryan loves to help people.”

Another project initiated during Carol’s tenure at the Therapeutic Recreation Center was a mobile sensory unit located at the Nannie J. Lee Center. She explains it was designed mostly for individuals with autism with sensory items to soothe the users. Ryan’s picture running a Kelley cares race is displayed on the side of the mobile unit.

Another of Carol’s initiatives was working with the Alexandria Sheriff’s Office on Project Lifesaver, which uses GPS tracking wrist bands to locate at-risk persons in an emergency. Her passion for the program came about after Ryan’s school lost him during a job sampling trip in 2006. Now Ryan wears the large white band 24 hours a day. The Sheriff’s Office inspects the device and changes the batteries monthly.

Carol and Ryan became a team promoting Special Olympics, with Carol organizing and Ryan participating in the events. She says it began many years ago when Ryan played Challenger League baseball in Fairfax. They eventually were able to play games at Simpson Field with assistance from buddies. Therapeutic Recreation formed a basketball team named Youth Opportunity Sports, where they had their own basketball team (Alexandria Titans) which led them to the Special Olympics in 2004.

Carol became a Special Olympics coordinator and Ryan played basketball for several years. He then moved into track and field events, participating in Special Olympics from 2004-2015. Carol said it involved coordinating practices, assuring the athletes had physicals and turned in paperwork for both Basketball and Track & Field. “Ryan has a lot of ribbons for Area 26, and we both have plaques from the Special Olympics.”

In addition, Carol and Ryan are deeply involved in the community activities of Del Ray, providing major support for the Del Ray Business Association (DRBA) through assistance with events including the Turkey Trot, Taste of Del Ray, First Thursdays, Music Festival, Art on the Avenue and more. Together they do set up, monitor the events throughout the day and then break down and clean up. Carol annually files the city permits for all of DRBA’s events along with other Del Ray events. This usually involves over 20 events each year. Carol adds that their favorite event is the Halloween Parade, which is in its 24th year and which she co-chairs with Gayle Reuter every year.

In addition to the regular organizational activities associated with the event, she assists in organizing the stuffing of 2,500 goodie bags, giving out Halloween costumes to children in need, serving the free hotdogs and purchasing lots of candy, cookies and apple juice for the participants. Ryan serves as the strong muscle man doing the heavy moving and setting up tables. “He just loves to volunteer.” He received the Service Award from the Optimist Club of Alexandria in 2008. “He has participated in so many events.”

Carol says the Annual Tree Lighting is always a joyous event that she loves. She received a lifetime award for all her efforts volunteering with Del Ray Business Association. For close to 25 years, she has been a leader and has volunteered to make sure events run smoothly and are successful in Del Ray and the City.

Ryan worked at a doggie day care from 2010-2014 and continued in Special Olympics. In 2014, Ryan had a medical issue and took a break from sports. Now he is in the city day program a couple of mornings a week where he works at the Capital Food Bank. Carol adds, “he can’t just sit; he loves doing that type of stuff.”

Carol says she has spent her life paving the way for Ryan. She and her family still live in the house her grandfather bought in Del Ray in 1900. It has a historical marker on the front column and a sign in the front yard that says, “Spread Kindness, Build Community.”