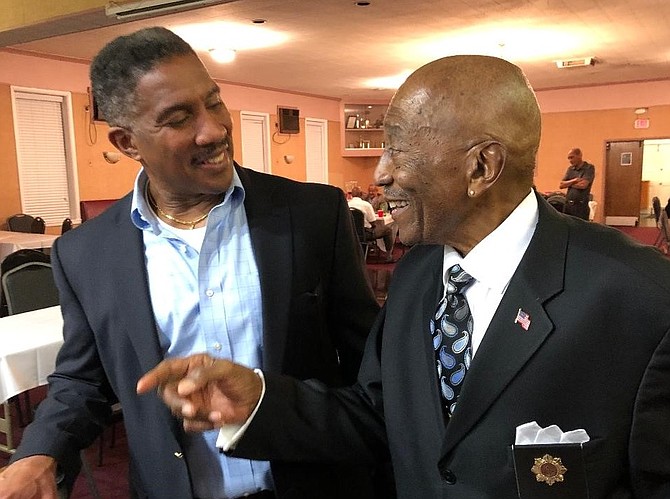 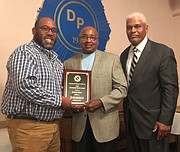 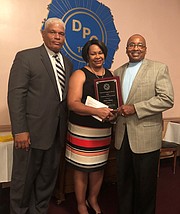 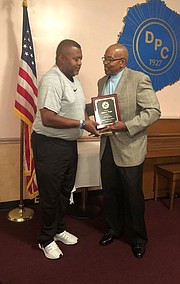 Gregory Wright, left, is presented an award on behalf of his uncle, Clifton E. Wright, from Departmental Progressive Club president Merrick Malone Sept. 27 at the DPC annual open house. Clifton Wright was recognized for his 35 years of service to the organization.

The Departmental Progressive Club honored three individuals for their service to the community at the organization’s annual open house and 92nd anniversary celebration Sept. 27 at the DPC facility on Gibbon Street.

“We are standing on the shoulders of some serious pioneers,” said DPC president Merrick Malone in opening the program. “The founders of the DPC are people who marched, people who fought and people who died. It has been a journey and the road has not always been easy.”

Greer accepted his award and noted what he sees as the success of the Titans Youth Football program.

“In Titans football, kids from many different neighborhoods are coming together,” Greer said. “They are working together for a common goal while coming from different corners of the city.”

Teri Gibson accepted the award on behalf of her husband, who was volunteering as an announcer for the T.C. Williams football game that evening.

Wright was recognized for his 35 years of service to the Departmental Progressive Club. His nephew Gregory Wright accepted the award on his behalf.