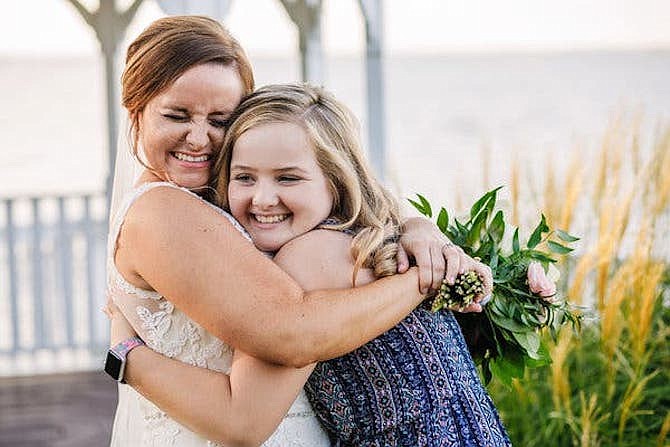 Sarah Aiken from Alexandria was practicing walking down the pretend aisle in the back of the restaurant in Annapolis before her wedding rehearsal dinner. "I looked to the left and saw this family, her blond hair and I knew exactly who they were."

Fourteen-year-old Kinley Strohl had flown in with her family from Ohio to attend the wedding of the woman who had given her a bone marrow donation seven years ago and saved her life. It was the first time they had met.

Aiken says, "My heart sank. I ran over and gave her a big hug. Then I hugged everyone in the family. …It was so magical."

The next day Kinley came by the hotel room where Aiken and her six coral-bedecked bridesmaids were getting their hair and make-up done before the wedding. "We had food and the bridesmaids were sipping champagne. Kinley was hanging out and chatting. She helped me put on my shoes and fixed my veil." Aiken says, "It's amazing her maturity level. I can't imagine when I was 14 years old going into a room of thirty-plus-year-old females so relaxed. She was just one of the girls. It was pretty cool."

Aiken says combining the emotions of the two big events of the wedding and seeing Kinley for the first time worked out because the day of the wedding itself was very regimented and scheduled. "So having her there just felt very relaxed all day."

Aiken and Kinley had been in touch through letters and email since a year and a half after the bone marrow donation. Aiken was at her mom's house scrolling through her email. "I saw an email from a person called Michelle and said, ‘Oh my gosh mom, I think it's the girl I donated my bone marrow to.’"

Kinley's mother, Michelle, had sent a report on how well Kinley was doing, a picture of Kinley and how thankful they were. "It was such a memorable day." It was the first time Aiken knew what Kinley looked like. She started crying.

Aiken had been in nursing school at the University of Pittsburgh in 2009 when the Student Nurses' Association had a bone marrow drive through DKMS and looked for volunteers. DKMS is an international nonprofit organization dedicated to ending blood cancers and finding donors.

Aiken volunteered to assist with the drive, learning a lot and educating others about joining the bone marrow registry. She decided to join the registry herself. "It just took a quick cheek swab." She received her registration number and waited.

Aiken knew as a nurse she would be taking care of people with cancer and it seemed the right thing to do. "It was about two years later, in the fall of 2011 when I got the call that I might be a potential match for a six-year-old girl with leukemia." They keep the identities of donor and recipient anonymous until after a successful transplant.

Aiken had a number of blood samples taken for further evaluation and got a lot of education along the way. "They made the process very easy for me. A month later I got a call from the DKMS that I was a match." Aiken adds, "I got a lot of education, but in the back of my mind I knew the answer would be yes. I knew if I could be a small part of helping someone, I would have to do it."

Aiken had surgery at Georgetown University Hospital in January 2012 after a full physical and more blood work. Aiken was under general anesthesia while they took bone marrow from her pelvis bone in her lower back. She says she woke up in recovery on the oncology floor. "I was appreciative of the care I got. The contrast was pretty interesting, with some people there doing the same thing I was, and others on the other side with cancer."

Aiken was released the next day with two very small pinpoint holes in her back. "I felt fine." The only lingering reaction was fatigue for about a month "but it was nothing like Kinley had."

"It is so important for more people to join the registry and for people to know that so many people are waiting for a match,” Aiken said. “This would not have been possible without DKMS."

What next? "Now we text a lot." Aiken will be starting a job as a nurse practitioner at George Washington and thinks she may make a trip to Ohio to see Kinley in person while she has a few days between jobs. But it's clear to both of them that whenever, or however, it happens their lives are intertwined. "She's an extension of myself."

DKMS is the largest blood cancer donor center. Finding a matching donor is extremely rare; finding a match is a numbers game so it is critical that they register as many donors as possible.

In the U.S., DKMS has registered more than one million potential donors and facilitated more than 3,800 life-saving transplants. But 70 percent of people suffering from leukemia, lymphoma and other blood cancers must rely on donors outside their families and every nine minutes in the U.S., someone dies of a blood cancer.

For more information or to register to receive a bone marrow donation kit, you can request a swab kit online at dkms.org