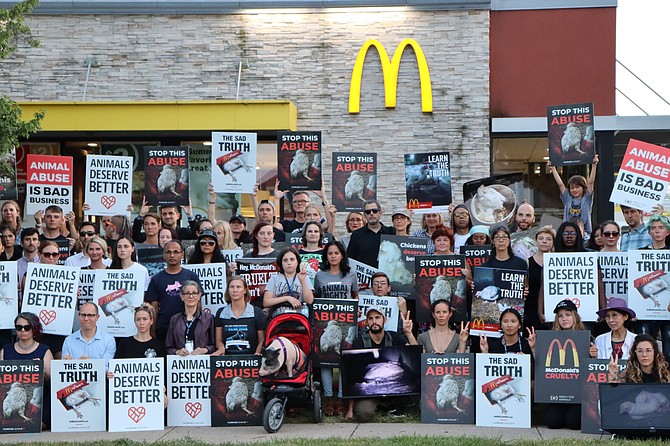 Animal rights activists gather together for a photo at the conclusion of the protest organized by The Humane League, which took place in front of the McDonald’s in Bradlee Shopping Center. Photo by Sarah Sklar/Gazette Packet 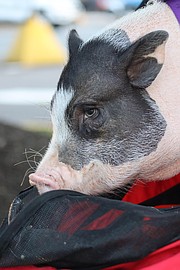 A pig named Franny participates in a protest against the treatment of chickens by McDonald’s. 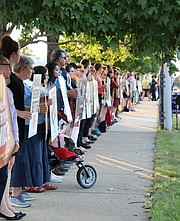 More than 140 animal rights activists lined up in front of the Bradlee McDonald’s in a protest organized by The Humane League.

A protester stands holding a sign while also holding his dog on a leash in front of the Bradlee McDonald’s.

More than 140 animal rights activists participated in a protest in front of the McDonald’s in Bradlee Shopping Center on Saturday, July 28. The peaceful demonstration included representatives and volunteers from The Humane League, Mercy For Animals, Animal Equality, Compassion Over Killing, and other animal advocates gathering together for the Animal Rights National Conference on July 25-28 in Alexandria. The goal of the protest, which took place from 7 to 8 p.m., was to call attention to the treatment of chickens by McDonald’s. According to organizer Jennifer Barckley, the campaign against McDonald’s has lasted the longest, while 100 other major fast food chains, such as Subway and Burger King, have implemented stricter ethics standards and added vegan and vegetarian items to their menus. More information on the campaign is available at https://truthaboutmcdonaldschicken.com/