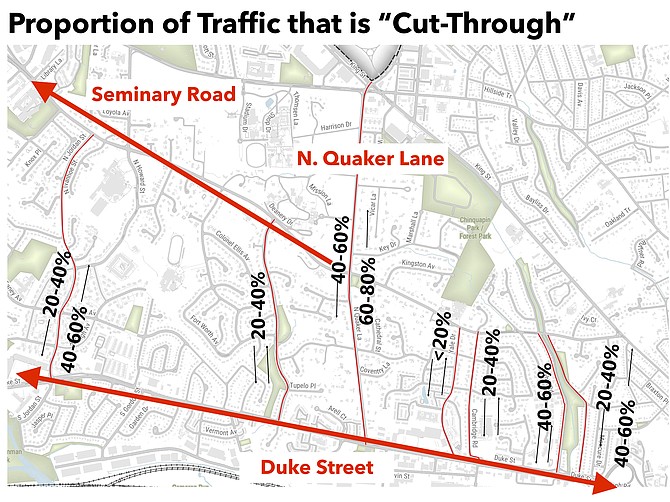 Hundreds oppose the potential reduction of Seminary Road’s vehicular lanes, ahead of city staff’s final recommendation, set for next month, about how to reconfigure that traffic artery through central Alexandria.

In 2016, the city government identified Seminary Road as having potential for pedestrian and bicycle infrastructure improvements. The city’s Department of Transportation and Environmental Services (T&ES) developed three design alternatives, about which it’s been gathering public input and will narrow to a final recommendation in early May. To save on costs, the city would make any approved overhauls in conjunction with scheduled repaving later in 2019.

The city scored each alternative, on a scale of 1-5, in each of seven categories: pedestrian safety/comfort; filling in sidewalk discontinuities; controlling speed; preventing crashes; minimizing vehicle delay; adjacent resident livability; and bicyclist safety/comfort.

While the stretch currently comprises four vehicular lanes, two westbound and two eastbound, the three options under consideration would:

The petitioners reject the third option. They say a worsening traffic squeeze causes “dangerous cut-through traffic on secondary roads and neighborhood streets,” as well as “longer travel time and decreased mobility for residents.”

Hoffman says she and others are “dumbfounded” that the city keeps making decisions — like reducing speed limits and vehicle lanes — that worsen traffic on arterial streets. She says she’s unconvinced the “narrative” of resident opposition is getting through to City Council.

Petitioners ask that the Traffic and Parking Board reject Alternative 3, if that’s the option T&ES staff ultimately put forward. The board, one of the city government’s many advisory bodies, comprises seven council-appointed members, charged to “consider matters concerning substantial changes to traffic and on-street parking regulations.”

Asked to comment on the petition, T&ES Director Yon Lambert said: “We understand this is a heavily traveled corridor, and that its design affects a number of residents. … [A recent public feedback campaign] … attracted approximately 1,200 responses, which staff are currently summarizing and analyzing. The results should be available soon. This process has been and will continue to be informed by public input, technical analysis, and our efforts to improve traffic and mobility on city streets.”

The Traffic and Parking Board is scheduled to hear staff’s recommendation on Monday, June 24, starting at 7:30 p.m. in council chambers as City Hall. The public may speak at the meeting.