Striking a Chord in Alexandria 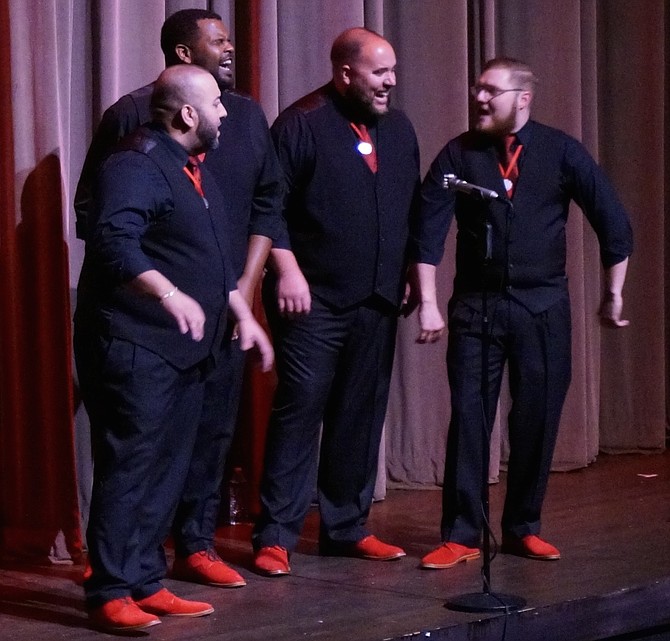 “I am so pleased to be a catalyst and a bridge between two communities.” — Joyce Garrett, music director at Alfred Street Baptist Church 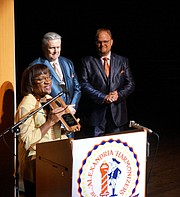 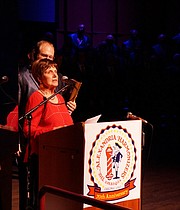 Marjorie Latzko, a Grammy Award winner and Hall of Fame inductee as a member of the 1950s group the Chordettes, congratulates the Alexandria Harmonizers at the 70th anniversary concert Sept. 8 at Rachel M. Schlesinger Hall.

The Alexandria Harmonizers welcomed music royalty to the stage as they celebrated their 70th anniversary with a sold-out concert Sept. 8 at Rachel M. Schlesinger Hall.

Marjorie Latzko, an inductee to the Grammy Hall of Fame as a member of 1950s group The Chordettes, made an appearance as a special presenter to celebrate the Harmonizers. Known for the hits “Mr. Sandman” and “Lollipop,” Latzko is also the widow of the late Walter Latzko, a renowned music arranger and honorary member of the Harmonizers.

Last presented in 2012, the award recognized Garrett for her efforts in bringing together the Harmonizers and the church’s men’s chorus.

“This is a real honor,” said Garrett in accepting the award. “I am so pleased to be a catalyst and a bridge between two communities.”

The anniversary concert featured video clips of past performances, and special presenters, including past music directors and choreographers, recounted tales of the organization’s history.

The Harmonizers, who have won multiple international awards, are under the direction of Joe Cerutti Jr. For more information, visit www.harmonizers.org.