‘Unified and Distilled Vision’ in Alexandria 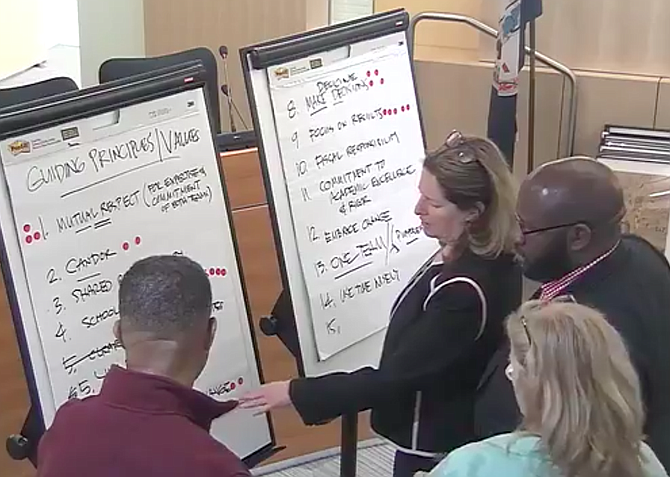 At a joint “visioning” session last Saturday, City Council and School Board members honed the core values that they want to guide a new season of collaboration.

In a joint “visioning” session on Saturday, May 19, the City Council and School Board began laying out common values and criteria for decision-making.

The effort follows from the Ad Hoc Joint City-Schools Facility Investment Task Force’s recommendations. Council established the advisory task force, comprising citizen-volunteers with relevant professional backgrounds, last May, following a particularly contentious FY 2018 budget. Council and the School Board are statutorily separated, sharing the power of the purse with respect to public education. But drastically misaligned outlooks created what the city budget document called a “funding dilemma.” Council charged the task force, as a “disinterested” third party, to help prioritize city and schools’ projects within funding constraints and to streamline the overall inter-governmental capital budgeting process.

The task force delivered its recommendations last winter, paving the way for greater agreement in the FY 2019 budget. Regarding overall process, the task force’s principal diagnosis was that “Alexandria lacks a unified and distilled vision for the future,” according to its final report. “Each entity has its own strategic plans and vision but not a document that distills them together and that would support understanding priorities and tradeoffs.” A common vision would help to “clarify priorities for decision making.”

In this vein, Saturday’s meeting focused on “establishing some new rules by which … decisions can be made,” said Mignon Anthony, the schools’ new chief operating officer and a former task force member.

“What are the core values that we want to develop for this new collaboration?” asked facilitator Steve Polo of OPX, a consulting firm. The two bodies landed on a handful, including:

Officials also brainstormed criteria, according to Polo’s brief, for “assessing and selecting between the competing or coincident opportunities or concepts.”

“Often a decision … gets made [through] an internal lens that nobody else can see,” said Polo. “If it’s external, it’s usually something like, ‘How much does it cost?’ which is valuable but not very strategic. [Or] worse: ‘I like it,’ or, ‘I don’t like it’ — really not strategic. … We’re going to try to build a set of criteria that we can use … to decide almost anything.”

Other jurisdictions have also taken steps to bridge their municipal governments and school divisions. For example, nearby Fauquier County and its schools consolidated three areas: human resources (including compensation and benefit programs), finance (including procurement) and general services (buildings and maintenance).

In a 1997 issue of “Government Finance Review,” John Doane, the ad hoc administrator who oversaw the consolidation, and John Tuohy, then county finance director, wrote about the resultant “improvement of the process of developing the capital improvement program (CIP). With a single department responsible for all buildings and grounds, priority setting lost much of the contentious schools versus general government infighting ….”

The consolidation resulted in an initial annual savings/avoidances of $765,000 (nearly $1.2 million in current dollars), according to a 1998 report. The report also noted: “Any savings resulting from staffing changes increase over time as annual step and cost of living increases are avoided.”

Asked if Alexandria has considered consolidation to the extent possible, City Manager Mark Jinks said: “In general, the sharing of services has evolved to either the City or ACPS [Alexandria City Public Schools] based on who has the greater expertise, or if an economy of scale can be obtained by combining services (as was the case with mowing). I would make a distinction between the City/ACPS and Fauquier and its school system. Fauquier has a much smaller government than does the City. [Alexandria has 3.5 times the staffing level, 4 times the non-school portion of the operating budget, and 10 times the FY 2019 CIP.] There is also an issue of accountability, as there are some services such as building maintenance that as a building user one wants to be able to direct. That said there are potential areas for combining operations such as fleet maintenance, more sharing of business operations software, and joint procurement which are all currently under study.”