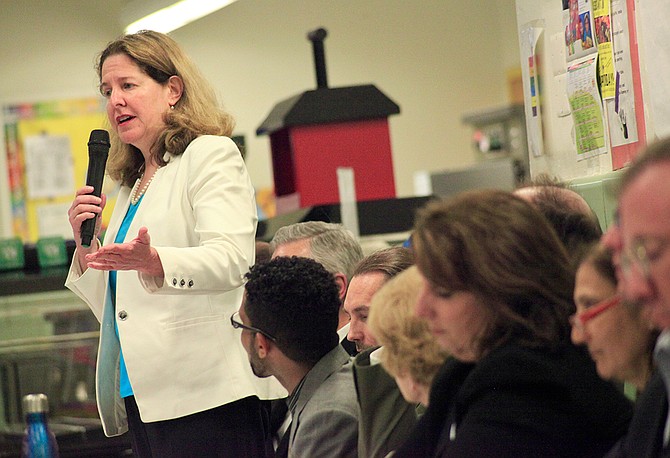 Arlandria can sometimes feel entirely different from the rest of Alexandria. It's a neighborhood defined by its diversity, where Spanish is as common as English on the city streets. It's a tight-knit community that's weathered economic and law enforcement troubles and emerged with a strong sense of values. On May 18, the residents of Arlandria came out to the Cora Kelly cafeteria to determine which City Council candidates will best represent those values in November.

With 15 candidates and one surrogate, there was very little time for long answers or back and forth debate. While earlier debates focused on traffic and developing businesses, the audience at the Arlandria debate was intently focused on how the City Council of 2019 would address the affordable housing crisis and immediate immigration concerns of Arlandria residents.

“I’m looking to see how the candidates can better serve our low income communities and our communities of color,” said Ingris Moran, one of the debate moderators and lead organizer for Tenants and Workers United. “I’m looking at how they can support our undocumented communities and what they bring to the table on affordable housing.”

The two Republican candidates, Kevin Dunne and Michael Clinkscale, were the lone votes against increased DACA protections for Alexandria residents. The Democratic candidates called for the city to look into authorizing drivers licenses for undocumented residents, a process that would require state approval, and opening up more city services like libraries and legal counseling to undocumented residents. Clinkscale scoffed.

“That’s not how it works in the real world,” said Clinkscale. “If you’re here unlawfully, then you have to follow the steps to become lawful.”

Mark Shiffer, running as an Independent, criticized the city’s law enforcement for collaborating with federal authorities, an agreement he said was detrimental to public health.

“There are things we can be doing on immigration,” said Krall. “The Sheriff's Office is in an agreement with Immigrations and Customs Enforcement (ICE). We could require judicial warrants instead.”

Krall also said affordable housing had to play a role in any City Council discussion. Krall said he hoped to see the penny fund for affordable housing go back to one penny. Gender identity and discrimination was also an issue highlighted by Grassroots Alexandria. For Krall, it’s a classification he’d like to see added to local rules about discrimination, and when candidates were asked about it during the debate only the two Republican candidates disagreed.

“I would like to see Alexandria maintain its diversity,” said Tim Beaty. “Low income housing is particularly of interest.”

Beaty also said he had concerns about the recent Potomac Yard Metro Station’s changes. Beaty said he was concerned about how the process was handled and the lack of transparency, and wondered why it was the southern entrance which benefited residents that was cut and not the northern one.

In the long run, Beaty also said he believed the city was making a mistake in not bringing firefighter and police pay up to the standard regional levels. By underfunding emergency services, Beaty repeated issues raised at City Council meetings by fire and police personnel that the city is paying to hire and train staff who turn around and leave for better departments.

“I have a basis of concern for candidates who are too close to developers,” said Beaty. “At the mayoral level, I lean towards Allison [Silberberg]. I wish she was better at expressing her point, but I don’t want a city run by developers.”

While the School Board has separate elections, many residents also said they were looking to the City Council to see how they would fund the schools and shape school policies in years to come.

“Education, gun violence, elderly care and housing affordability are the most important issues for me,” said Darrlynn Franklin, secretary for the Alexandria branch of the NAACP. “I’m looking at how they plan to move Alexandria forward.”

During the debate, candidates were asked whether they would want to add armed safety officers to Alexandria schools. The topic was more contentious locally after a school resource officer at George Washington Middle School accidentally fired his weapon inside the school. All of the candidates said they would oppose more armed personnel in schools except Democratic candidate Matt Feely, who after making sure the question didn’t mean arming teachers, held out on his lone vote in favor of more armed security.

For some, education and housing affordability were two issues tied together.

“I’m looking at housing affordability,” said Lindsay Stewart, a teacher who works in low income communities. “I can barely afford to live here. I’m also looking at candidates for ACPS, given that the council doesn’t usually fully fund the school budget. Those are my big two.”

While the School Board’s budget was fully funded by the City Council for FY 2019, several School Board members during the approval process expressed dissatisfaction with the budget and said it didn’t fully needs of the schools to handle the rising student population. During the debate, Vice Mayor Justin Wilson championed his tax increase for the FY 2018 budget that exceeded the city manager’s proposed budget to increase funding to the school’s long term investments.

While going down the row of 15 candidates led to a lot of agreement and repetition across the candidates, one of the more divisive questions of the evening asked candidates whether they supported dedicated funding for Affordable Housing. The dedication of a meals tax increase as committed funding to affordable housing was one of the more contentious items in the FY 2019 budget, with Wilson and City Council members Paul Smedberg and Tim Lovain voting against the dedication. While every candidate said making Alexandria affordable was a priority, many said they believed dedicating funding in an operating budget was a fiscally unsound practice.

“The problem with dedicated funding is if you dedicate funding to one need you won’t have the money for emergency needs or other priorities,” said Democratic Candidate Amy Jackson.

“If we dedicate funding, there’s no impetus to expand,” said Democratic Candidate Dak Hardwick. “Dedicated funding is only a ceiling, what we need is a floor.”

But other candidates stood by the dedication of funding, saying the city’s affordable housing needs were dire enough to demand bold action.

“I do support the dedication of funding,” said Democratic Candidate Elizabeth Bennett-Parker. “This is a crisis. We also have to look at our other tools, like the need for more micro-units.”

“I’m generally not in favor of dedicated funding,” said Democratic Candidate Canek Aguirre, “but we need it here.”