Splitting the Bill in Alexandria
Votes

Splitting the Bill in Alexandria 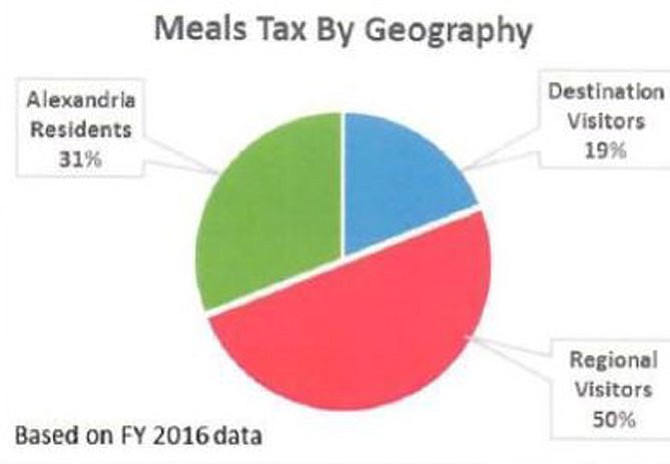 Every year, there’s 30 million meals sold in Alexandria. Across every restaurant and diner, there’s a four percent meals tax at the end of every receipt in addition to the six percent sales tax. But as the city budget nears its approval on May 3, the consensus on the City Council seems to be set in favor of increasing that meals tax by one percent, adding 16 cents to a $16 meal, to put into dedicated funding for affordable housing. But at the council’s final add/delete session on April 30, questions about the financial sustainability of the plan resurfaced and Mayor Allison Silberberg put forward an alternative plan.

“Every time we’ve had dedicated funding in the past, and we saw this with open space, where money was sitting in a fund and you had schools and you had other priorities come forward,” said Smedberg. “There was nothing coming forward with open space, and what did councils do? They saw the money sitting there and they grabbed it and took it. That’s what I’m concerned about beyond philosophical opposition to dedicated funding in general. I’m concerned money sitting in a fund could potentially be taken. Even with dedication, future councils aren’t required to keep that. I think it makes it more palatable to put it in the general fund. Maybe one year it’s a million dollars, maybe the next year 10 million, but that’s based on plans and market forces.”

On the other side of the issue, defenders of the dedicated funding argued that everything about affordable housing, from needs to opportunity, is consistent except for funding.

“Even when projects aren’t lumpy, even when pretty lined up for us, we don’t dedicate funds,” said Chapman. “It’s not the projects. We’ve had projects lined up for a couple years, and we’ve never taken the opportunity to line up the resources around it. There’s no lumpiness in the need. We have folks coming to our housing department looking for opportunities to do projects. What is lumpy is developer contributions.”

Chapman also warned that the city’s current system of relying on developer contributions could be in its twilight, with developers already expressing a desire not to contribute more to the fund.

“[Let’s] not just do this as a charity, let’s systematically do it,” said Chapman, “a regular stream of revenue that helps bolster that.”

“I started this ruckus, so I might as well say a few words since I was the one,” said Bailey. “One of the things I ran on was affordable housing. I went from outhouse in southern Virginia, to public housing, affordable housing, to being able to buy a house. Alexandria offered us that mobility escalator and it’s dying. There are 22,000 or 23,000 employees in this city taking our tax dollars and spending them somewhere else. [Those are police] officers and firefighters. Do we even care? I’m tired of kicking this platinum can down the road.”

Chapman and Silberberg also both pointed to the council’s unanimous support for dedicated funding for the Metro system from the state legislature as a hypocrisy for saying there was opposition to the idea of dedicated funding. Smedberg countered that state funding was different, funded as a dedicated portion of the budget rather than raised directly from taxes.

In Virginia, 195 localities have a meals tax. The majority of them, 108 localities, have a meals tax over four percent. The median rate in Virginia is five percent, with the average for cities being six percent. In its 2018 budget, Richmond increased its meals tax from 6 percent to 7.5 percent. When Alexandria raised its meals tax in 2008 by one percent, city staff said there was no discernible economic impact. But the proposal still has critics among local business owners. While the meeting didn’t have a public speaker section, when Bailey was testifying about growing up in Alexandria’s affordable housing a woman stood up and shouted at the council that they should be ashamed of themselves for proposing a meals tax increase.

In an effort to get around the necessity of a meals tax, Silberberg proposed a third plan that seemed to appease neither side.

The response from both sides was immediate.

“I seriously question to what extent we can bind a future council on a tax rate,” said Lovain. “You’re also talking about … a one year delay in substantial funding for affordable housing, which I think is questionable … I’m very nervous about the prospect of binding future councils for five or 10 years instead of following the priorities in years to come. I think there’s serious questions about your proposal.”

“I’m baffled,” said Wilson. “I’m getting whiplash here. Last year, during our budget process, you were very eloquent in opposing the budget in saying we should not raise the tax rate to put money in the CIP to fund an unspecified list of school projects. Now here we are a year later, you’re saying we should raise the tax rate next year to put money in the CIP for an unspecified list of affordable housing projects.”

Silberberg defended her plan by saying that her preference would be to find that dedicated money inside the budget without needing a tax increase. Jink warned that the go-to place to cut funding is in city government, but that city is already operating with less staff than it had 10 years ago, despite the city’s population increase. Jinks also expressed reservations about the city’s ability to implement Silberberg’s proposal.

“I would be concerned at this point about locking in any real estate tax rate and dedicating it for the fiscal year 2020 budget,” said Jinks. “We have many challenges coming at us for 2020; school enrollment, [Metro], debt service growth. I would be concerned about setting out a new marker outside of the fiscal year 2019 funding plan for any new purpose without knowing what all the financial issues are going to be facing us.”

The final budget is scheduled for approval on May 2.