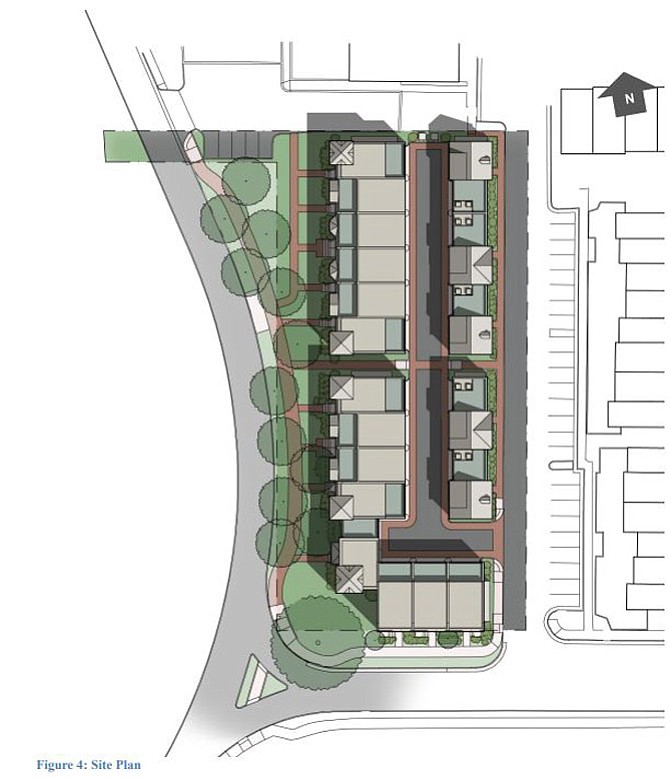 Concept rendering for the new townhouses at the Old Colony Inn. Photo contributed

Concept rendering for the new townhouses at the Old Colony Inn.

Land use attorney Catherine Puskar warned neighbors two years ago opposing the development of the Old Colony Inn as a hotel that the alternative, redeveloped as townhomes, would mean building in closer proximity to nearby residences. Two years later, after the developers behind earlier plans to redevelop the property as a new hotel backed out from the proposal, Puskar’s prophecy is coming true as Toll Brothers Inc.’s proposal to redevelop the site as townhouses received unanimous approval the May 1 Planning Commission meeting.

If these plans fare better than the earlier ones, the former Old Colony Inn will be redeveloped as 19 condominium townhouses with new streetscaping and tree plantings on the surrounding streets. The site will also bring in a $139,457 contribution to the city’s Housing Trust Fund.

The plans for the hotel redevelopment generated controversy in 2016 when residents argued that the development would overshadow neighboring residents. At the commission meeting, there was only one resident arguing for changes to the proposal.

“If you surveyed residents of Canal Way, everyone would say it’s too tall and there’s a nice continuum of buildings,” said resident Ken Adami. “That it’s disruptive and not very attractive. But I think most residents would agree that’s a battle we fought before and we’re not going to win today.”

On the Planning Commission, the consensus uniformly favored the development, though some said they liked the previous Old Colony Inn plan.

“I’m disappointed by the proposal,” said Commissioner Nathan Macek. “The hotel use a few years ago [was] more appropriate use of site, but given that it was not feasible use of the site, I’m comfortable with the design proposed here.”

Others on the commission argued there was nothing outstanding about the site’s design but that the developers had managed to find a plan that neatly fit into place.

“I think you’ve done a good job with a difficult site,” said Planning Commission Chair Mary Lyman. “The design of the townhouses looks like it fits into Old Town.”

As the next stage in the city’s ongoing plans to reform its Old Town sewer infrastructure, the Planning Commission unanimously approved a transfer of ownership of the troublesome outfalls to Alexandria Renew. Though procedural, the docket item gave commissioners a chance to express their relief at City Council’s approval of a plan to build pipes to carry overflow to a water treatment plant.

“It’s a relief not to be facing a plan that put tanks into the park,” said Commissioner Maria Wasowski. “I’m relieved to see this solution. This is part of the progression of where we need to be going.”

“It makes sense to transfer this to the people who know what they’re doing,” said Chair Mary Lyman.