Meet the New Boss in Alexandria 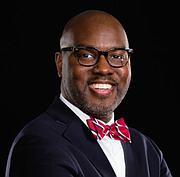 “Let’s do what’s right for our kids. Let’s make schools the best it's ever been. We’re not going backwards.” — Superintendent Gregory Hutchings

The boxes in Superintendent Gregory Hutchings’ office weren’t fully unpacked when the meetings started. Meetings with the city manager. Meetings with administration. Meetings with faculty. It’s been a whirlwind return to Alexandria City Public Schools (ACPS) for the new superintendent, coming home to the city he grew up in.

“This is where I’m supposed to be,” said Hutchings. “It’s very refreshing.”

Hutchings also admitted to being somewhat anxious, but said that if he didn’t feel anxious he’d be worried that he didn’t really care. ACPS has been through tough times. Several schools on the cusp of un-accreditation and Jefferson-Houston falling below standards. Relationships between the School Board and the City Council were strained over budgetary disagreements. But over the last few years, things seem to be turning around. Scores have risen across the board, and early signs say Jefferson-Houston could be re-accredited by the end of the year.

Hutchings said continuing these upward trends is one of his first priorities as superintendent. In fact, Hutchings said the administration is looking to take some of the lessons from Jefferson-Houston and apply them across the board.

“We’re staying the course and making sure we remove barriers to success,” said Hutchings. “Having an accountability system, with governance meetings once a month, is really unique. All schools will have that moving forward.”

Terri Mozingo, chief academic officer for ACPS, said the oversight meetings are about making sure the various levels of leadership are thinking collaboratively on the needs of the schools.

“It should help schools be more efficient and effective,” said Mozingo.

Natalie Mitchell, director of Title I programs, said these meetings put the principal and assistant principals, academic coaches, specialists, superintendent, director of instruction, chief academic officer, and federal or state level administrators all in one room.

“Last year was a perfect storm of having the right people in the right room,” said Mitchell. “On reading [strategies], for example, the school staff had one idea, but the office staff had a different view and experts from UVA were encouraging new practices. If these people are having conversations separately that’s not progress.”

The relationship with the city government seems to be improving as well. Closer collaboration throughout the budget process led to a budget that fully funded the superintendent’s proposed budget, though there were criticisms from the School Board that the budget was toned down as a result of the collaboration and didn’t actually address the dire needs in ACPS. Hutchings said one of his first meetings on his first day on the job was with City Manager Mark Jinks.

“Back in Ohio, the School Board raises taxes; the city doesn’t appropriate funds,” said Hutchings. “My role was more campaigning so they would vote for [funding], more like a City Council member. Here, it’s important for us to have a strong relationship with the city. Part of that is transparency to be able to show the needs for that funding.”

But while things look promising at Jefferson-Houston and for the city-schools relationship, there’s still several challenges on the horizon. The biggest, Hutchings said, is the school’s ongoing efforts to address it’s capacity issues. Alexandria schools are bursting at the seams with students, and projections indicate it’s going to get worse before it gets better. In the immediate future, the challenge is getting the new Ferdinand Day School on the West End ready for an opening later this year.

“The opening will be huge, so that’s a hot priority,” said Hutchings. “We [have to sort through] all of the logistics for that school. My job is to make sure we’re on target, to make sure the kids arrive to a safe building, to open on the first day with all smiles and no dust.”

In the longer term, Hutchings said the schools will have to work to narrow down options for how to deal with the capacity needs at the high school level and finding space in the city for the growing early childhood needs.

“Growth of student enrollment [means] we need more space for buildings,” said Hutchings. “We have to take a deep dive on that sooner rather than later. We have to look at our options for addressing high school capacity and narrow it down to three key options. Research also shows, if done right, early childhood education can have a positive impact on long-term development. But we have to figure out where to house kids with schools already at capacity.”

In addition to those big questions, there’s a series of other concerns that will demand the new superintendent’s attention over the next few years. When Hutchings attended T.C. Williams High School, he remembered discussions about needing lights on the field to support later evening activities. Years later, the issue has come back up again, with neighbors saying the school’s initial plans to install lights and more stadium features to its field encroaches on promises made to the nearby community years ago. It taps into older historic issues in the community as well, such as TC was built on land taken from the local African-American community and then named after a leader who fought against integration of the schools.

“I haven’t heard both sides and can now sit in meetings to discuss this,” said Hutchings. “At the end of the day, we have the best interests of young people at heart, but we need to gauge the pros and cons. Let’s do what’s right for our kids. Let’s make schools the best it's ever been. We’re not going backwards.”

Hutchings also said he’s been inspired by the wave of student activism in recent years.

“Kids need to have a voice,” said Hutchings. “They’ve spoken up on issues like gun violence. The world is changing rapidly, and it keeps me up at night. School safety is not probably on the list for superintendents in the past, but it’s at the top for me.”

Hutchings said the school district will also have to work to make local immigrants feel safe in the schools, despite the national rhetoric.

“It’s not my role for politics, but kids should feel comfortable and safe in our schools,” said Hutchings. “We want to make sure everyone feels welcome.”