The ADAMS Center event focuses on communities of faith’s response to violence. 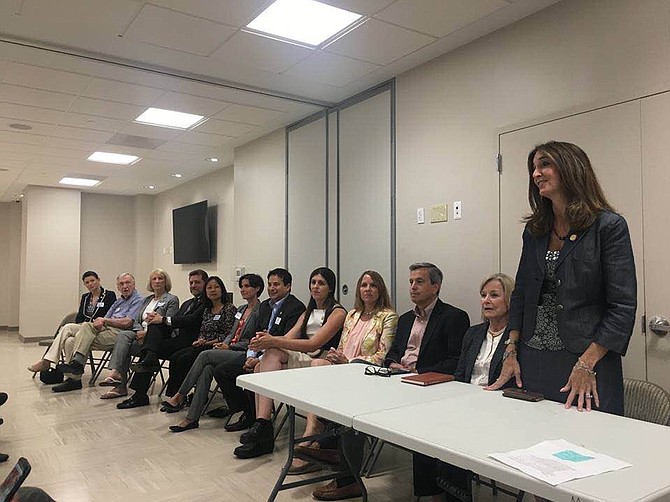 On July 5, the Safe Virginia Initiative (SVI) hosted its first Northern Virginia event, “Beyond Thoughts and Prayers,” at the All Dulles Area Muslim Society Center in Sterling.

In keeping with the title, the event focused on communities of faith’s response to gun violence, as well as violence in general. Representatives from Muslim, Jewish, Sikh, Catholic and Quaker communities addressed the assembled crowd, while a number of members of the House of Delegates listened to the varied concerns of those assembled. Attendees came from all sides of the firearms debate, from members of Moms Demand Action to members of the Virginia Citizen Defense League.

The program began with a number of faith leaders discussing how their faith dictates how to respond to violence and gun violence in particular. Next, various questions were posed to the audience about how they would like to see officials respond to gun violence, what laws were sufficient and what should be changed.

Members of the crowd discussed “gun free zones,” firearm carry in places of worship, and whether or not faith leaders should speak about methods to prevent gun violence from the pulpit. The event ended with an “open mic” for audience members to speak about what the General Assembly can do to reduce gun violence moving forward.

Just a few weeks following the Parkland tragedy in Florida, the Speaker of the Virginia House of Delegates announced the formation of a bipartisan Select Committee on School Safety. While the committee’s formation was considered historic, it was announced that the select committee would not address gun violence nor discuss potential legislative solutions with regard to guns.

Following this announcement, the House Democratic Caucus formed the Safe Virginia Initiative (SVI). The SVI is organizing events between May and October of this year related to gun safety. These events will continue to occur throughout Virginia and will include public input.

Prior events have included a town hall focusing on inner city violence in Richmond and a panel on the nexus of mental health and gun violence in Lexington.

The Safe Virginia Initiative is co-chaired by Del. Eileen Filler-Corn (D-41) and Del. Kathleen Murphy (D-34) and includes the following regional co-chairs: Del. John Bell (Northern Virginia), Del. Chris Hurst (Southwest), Del. Delores McQuinn (Metro Richmond) and Del. Marcia Price (Hampton Roads). The group will work with experts from the Office of the Governor, the Office of the Attorney General, local leaders from both parties and law enforcement to draft policy proposals for the next legislative session.

“I appreciated the opportunity to hear from a diverse group of people on how to best curb and combat gun violence,” said Filler-Corn. “This is the whole point of the Safe Virginia Initiative, we want to hear from everyone, because only by finding common ground can we move forward in a substantive manner on these issues. I look forward to continuing this conversation across the Commonwealth over the next few months,” she added.