Under the Same Roof in Alexandria
Votes

Under the Same Roof in Alexandria

New Lee-Fendall tour examines the life of slaves and servants throughout the home’s history. 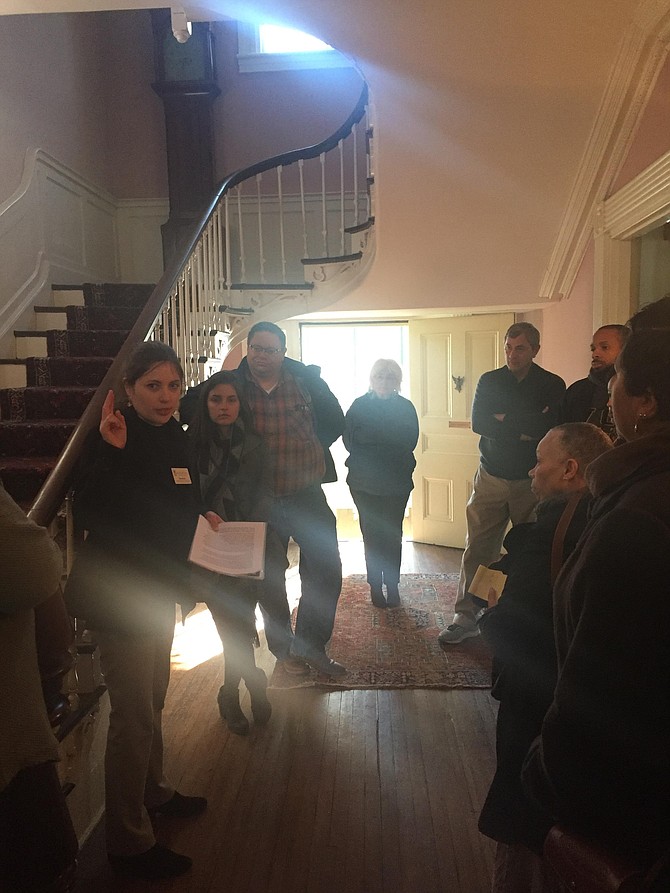 Amanda Roper leads a tour inside of the Lee-Fendall House. Photo by Vernon Miles.

The Lee-Fendall House opened as a museum to celebrate the bicentennial, but in the 40 years since it was purchased by the Virginia Trust for Historic Preservation, there’s a half of the building’s history that hasn’t been told. Much of the building’s history has focused on the home’s owners, like the Lee Family or the labor figure John Lewis. But for the first time, the Lee-Fendall House is working to tell the story of the slaves and servants who build the house and labored under generations of families.

The home was built in 1785, and when the Lee family moved in they came with 51 men, women and children enslaved to the family. Unlike many prominent homes of the day, the Lee home had its kitchens, cleaning and slave quarters all in the same building. With a dozen slaves working in the home, African-Americans living in the home far outnumbered the white family that owned it.

But according to Amanda Roper, assistant manager for the Lee-Fendall House, finding records discussing the slaves and their lives has been a challenge. The museum works from a combination of tax records and context clues from other pieces of local history. It isn’t stated where the slaves were from, and, when the family fell into more dire financial straits in 1805, it isn’t known where the 15 slaves sold from the household went. Roper says the museum is still trying to find the records of sale, but that it was very likely many of them were separated from their family and children, with some probably sent to work on plantations in the deep south.

The history of the house is a exhibit to the evolving national views of abolition and race. A later homeowner, Phillip Fendall, was an abolitionist and a member of the American Colonization Society. Fendall didn’t believe in racial equality, however, and like other abolitionist Virginians supported a plan to send former slaves back to Africa to the newly founded nation of Liberia. Documents from the home show that one man from the house, Henry Tate, did make the journey to Liberia to seek a better life. Roper says the museum was confused at first, because the document looked like a bill of sale to another family member, but a handwritten note on the back notes that Tate “has made his journey across the sea to freedom.”

By 1850, 10 percent of Alexandria’s population were freed black citizens. One of them, Malvina Harris, was biracial and hired to look after two of the family daughters as a nurse. Harris couldn’t read or write, so Roper said opportunities for work were scarce. By 1850, the slave trade had been outlawed but the fugitive slave law was in effect, so slave catchers regularly kidnapped freed black men and women and sold them into slavery. Roper said a freed woman like Harris attaching herself to a prominent local home was one means of protection.

After the Civil War, Alexandria was still the scene of outbursts of racial violence against the local black community, which had swelled during the war as escaped slaves from across the south fled north. However, by the time the Lees returned to the home in 1870, many of the Reconstruction programs designed to revive the economy and give newly freed black citizens a chance at starting a new life had disappeared. Many were forced to return to work for the same families that had owned them. Roper said there were very little records of employment in the home.

In 1903, the home was sold to Robert Downham, a liquor dealer and eventually mayor, who made notes at the time of having difficulties employing servants to staff the large home. Roper said at the time, new generations of black youth had begun to push for job opportunities beyond housework, leading to what Downham and others called “the servant problem.” Life outside the Lee-Fendall House was beginning to change as well. The first sit-in occurred at the Queen Street Library, setting the stage for future civil rights action. By 1937, Downham was forced to sell the home, this time to labor leader John Lewis.

Lewis’ ownership of the home was the end of its servant days. John Lewis was assisted by a chauffeur and bodyguard named James Lewis, who became a trusted friend of John Lewis and his right-hand man.