‘Good Project on a Challenging Site’ in Alexandria
Votes

‘Good Project on a Challenging Site’ in Alexandria 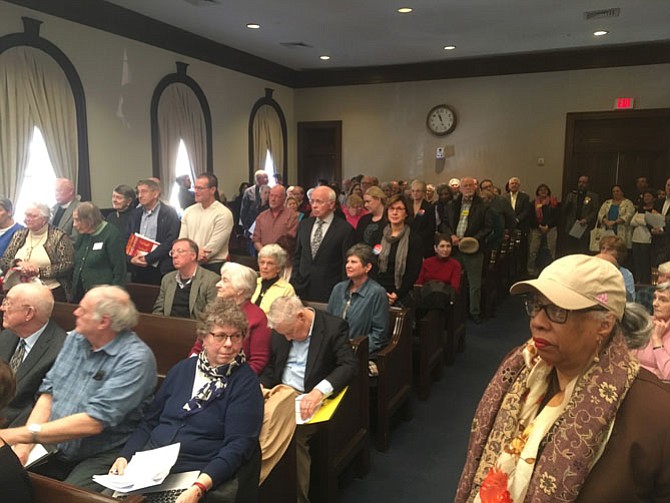 At its Jan. 20 public hearing, council adjudicated between what Kathleen Anderson​, CEO of Goodwin House, an Episcopal-affiliated retirement community adjacent to Resurrection, called “three noble missions:” the continued religious mission and ministries of the church; the mission of AHC, the church’s nonprofit developer partner, to build and operate housing that’s affordable to low-income families; and the mission of Goodwin House to provide housing and care for seniors. Nobody questioned the stand-alone merits of any of these, but rather to what extent they could exist within tight proximity.

Resurrection and Goodwin House have been neighbors for years. But in 2015 the former began pursuing an idea that would add another building, and its occupants, to the mix. The congregation decided to address a need in the community for affordable housing, and in doing so to stabilize its own finances. It’ll lease part of its land to AHC to build up to 114 apartments affordable to households earning 40-60 percent of the area median income (AMI). The lease proceeds fall at least $2.8 million (40 percent) short of what the land could have fetched if the church had allowed fewer affordable and some market rate units. Still, the deal will yield just enough to finance a new, smaller and more budget-friendly church facility adjacent to the new apartments. Council’s approving the site plan and a low-interest (2-3 percent) loan of up to $9 million was Resurrection-AHC’s last local hurdle. This spring, the project will compete at the state level for federal tax credits. The credits, if awarded, will become the decisive piece of a total financing patchwork, including the city’s loan, of $45 million. Without the credits, the project will die.

Advocates turned out in force at Saturday’s hearing. So did Goodwin House residents and management, many (though not all) of whom felt the foregoing planning and political processes gave short shrift to their input. A petition, signed by 170 (about 40 percent) of Goodwin House’s residents, outlined their concerns: mostly that Resurrection-AHC’s plan doesn’t adequately mitigate potential ill effects, especially with regard to parking.

Kathy Puskar, Goodwin House’s attorney, said the petition served not to oppose, but to “improve upon the project … to ensure that all these competing missions can coexist successfully.”

To improve parking, Lindsay Hutter, a Goodwin House executive, asked council to require more underground spaces, reduce seating capacity in the new church, or both. The current design meets the city’s standard for parking spaces, including 28 for the church. But a normal Sunday service brings in 34-49 cars, said Hutter. Though council’s decision requires city staff to review and approve an off-site overflow parking plan before issuing the new church’s certificate of occupancy, that plan’s details aren’t settled.

“I have heard some say that they support affordable housing, just not this particular project,” said Kat Turner, a Resurrection parishioner. “But this is the opportunity that is before us: a chance to … help [over] 100 families in our city. Now. Not at some possible future time in some hypothetical other place. … Is our project perfect? Probably not. But perfection was never our mission. Our mission was love and welcome.”

“We are confident that the plan that we are asking you to approve today will provide a place where people of all means, all ages and all faiths can live safely and peaceably together — and even park there — sharing what we have been given, and gladdening all our hearts,” said the Rev. Jo Belser, Resurrection’s pastor. “Consider that the need for both affordable housing and a church in the Beauregard corridor is very great. … I ask that you trust the process that has brought this project to you in the form that it’s in.”

Yet, the Rev. Frank Wade, a retired Episcopal priest and Goodwin House resident, though signaling overall support, cautioned: “It’s very difficult to raise questions about such a project without being seen as opposed to the project itself. Such a categorization is especially tempting when people who are predominantly financially secure and white comment on a project that will benefit struggling families, many of whom may be families of color.” Council should “be aware of the subtle impulse to discount the views expressed by Goodwin House residents, and allow those views to sail or sink by their value to the debate.”

Mike McCaffree, another Goodwin House resident, said: “There have been references to ‘those rich people at Goodwin House,’ implying that we are removed from the Alexandria community and we don’t care about people who are struggling financially or other ways. This is a false picture.” In fact, some residents receive charitable subsidies, and many participate in outreach ministries and community service, he said.

Council approved the proposal with some minor tweaks.

“This is a good project on a challenging site,” said Vice Mayor Justin Wilson. Affordable housing projects “get us in [to] kind of a brutal set of math and land use trade-offs to make it happen. It’s the only way it does happen. … It is a challenge to work through these and come up with a land use solution that accommodates everyone. But I think it’s a worthy goal and we should certainly try.”