One Step Closer in Alexandria
Votes

One Step Closer in Alexandria 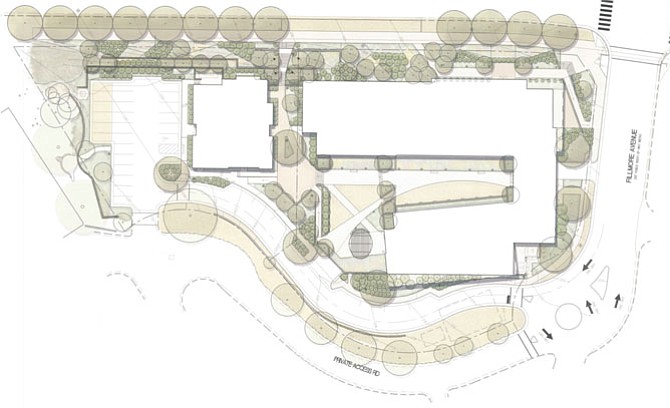 The proposed site plan for an all-affordable housing development on the Episcopal Church of the Resurrection’s West End property. City Council will consider the project for final approval on Jan. 20. 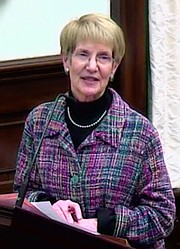 Betsy Faga, a parishioner at the Episcopal Church of the Resurrection, gives public testimony to the Planning Commission in favor of the church’s proposed all-affordable West End housing development.

The Planning Commission unanimously approved at its Jan. 4 meeting an all-affordable housing development on the Episcopal Church of the Resurrection’s West End property.

“We observe that many of our neighbors [in the Beauregard corridor] struggle to afford housing. … So we decided to practice what we preach,” the Rev. Jo Belser, Resurrection’s pastor, told commissioners Thursday. The church plans to lease a large portion of its land to AHC, a non-profit developer, to build 113 apartments with rents for low-income families. Specifically, the units would be priced for 40-60 percent of the area median income (AMI), dipping into a particularly underserved economic stratum — only 2 percent of Alexandria’s committed affordable housing stock serves households making 30-50 percent of AMI, according to the city’s web site. The deal would cap rents at their designated levels of affordability for 65 years. The proceeds would also build a new, smaller church facility with lower overhead costs, helping to stabilize the congregation’s finances.

The project narrowly survived the winnowing of the city’s FY18 budget process. With Planning Commission’s thumbs up, City Council will now consider the project for final approval at its Jan. 20 public hearing. With council’s approval, Resurrection would apply for federal tax credits, a form of subsidy, in March. A city loan of up to $9 million could leverage five times as much financing from other sources, including an estimated $24 million in hoped-for tax credit equity. This leveraging makes Resurrection “a very significant project” for the city, Helen McIlvaine, Alexandria’s housing director, told council at Tuesday’s legislative meeting. Tax credits, which are competitive to obtain from the state agency that allocates them, would constitute over half of the necessary financing patchwork. To be competitive, the church needs a city-approved plan that keeps costs down.

“If it doesn’t get the credits then the project’s not going to happen,” said Eric Keeler of the city’s housing office. “Any additional cost that keeps being layered onto the project has a major detrimental impact.”

Planning and Zoning’s Sara Brandt-Vorel outlined for commissioners various “community benefits” that the project would provide: “almost 15 percent of the [800] affordable units identified [as an objective] in the Beauregard Small Area Plan; an enhanced streetscape along N. Beauregard [Street], with enlarged sidewalks, additional open space and a landscaped hillside with terraces …; 45 percent open space across the site; the [at least partial] undergrounding of utilities along N. Beauregard Street …; and a contribution to the Beauregard Implementation Fund for the development of public benefits identified in the Small Area Plan, such as the West End transitway,” a planned bus service.

The project has also met opposition. Residents from Goodwin House, an Episcopal-affiliated retirement community adjacent to Resurrection, turned out to express their concerns. Several said they support the church’s affordable housing mission in principle; they even think the retirees could benefit from proximity to the younger families who would largely occupy the new apartments. But they worry that the increased density of buildings and people in the current proposal will cause untenable and even unsafe traffic and parking congestion. They also worry that a rezoning of the church’s property might open the door for future uses with undesirable outcomes.

“The need for organizations in Alexandria like Goodwin House … is growing just as fast as the need for affordable housing,” said Lindsay Hutter, chief strategy and marketing officer for Goodwin Housing, Inc. She cited the large number of retiring baby boomers. “We are concerned that a decision could be made with regard to this proposed development that could provide relief to some of today’s need for affordable housing at the expense of Goodwin House Alexandria’s needs. That outcome would injure our future ability to provide senior housing.”

A particular point of contention has been vehicular access. The current site plan includes separate, parallel driveways for the church and Goodwin House. Mary Lyman, chair of the Planning Commission, called this situation “ridiculous.” Several commissioners encouraged the parties find a one-driveway compromise in time for final project approval. Commissioner Nathan Macek said: “We really do put the onus on neighbors to work with each other. And in this case, you’re both of the same faith tradition … So these two groups, of all people, ought to be able to find a way to work together.”

Though some on the Planning Commission empathized with certain opposition concerns, they mostly dismissed worries about traffic safety and parking. They decided that the addition of affordable housing outweighs the downside risks. And time may prove certain concerns to have been overstated, some said.

Commissioner David Brown said in his closing remarks: “I feel like, in a way, in approving this project we are helping someone that’s been on a long marathon get across the finish line. … If this project had come along as a for-profit, multi-family unit building and tried to cram this much use onto this small site, I just can’t imagine I would go along with it. But to me the fact that it’s affordable housing takes it over the finish line.”