People: Philanthropy with a Laser Focus 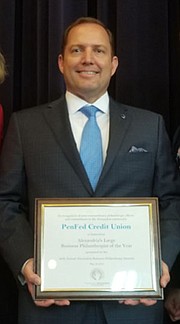 On Sept. 11, 2001, Al Qaeda’s attacks on America rocked the country – and much of the globe. As the world reeled, the Pentagon Federal Credit Union (PenFed) established the PenFed Foundation, a non-profit organization through which they could provide financial support to members of the military community — for the people protecting America from future horrors.

“The original mission was to support the wounded warriors coming home from Iraq and Afghanistan and their family members while they were recovering at Walter Reed and Bethesda military hospitals,” said James Schenck, PenFed president and CEO. “The goal was to ensure that a medical emergency won’t become a financial emergency. This also involved providing financial education to set them up for a more secure financial future. The Foundation programs are designed to help individual veterans, active duty service members, military caregivers and veteran entrepreneurs whether or not they are PenFed Credit Union members.”

Thanks in large part to Schenck himself, the PenFed Foundation has gone above and beyond its mission. The foundation, which relies heavily on the credit union for funding, has provided more than $30 million in financial support to the military community. And, earlier this year, Volunteer Alexandria — a community resource that matches volunteers with organizations that need more hands on deck — named Schenk Alexandria's 2018 Large Business Philanthropist of the Year.

“Since 1980, Volunteer Alexandria has served as a link between individual and group volunteers, area nonprofit organizations, and city agencies in need of support,” Board member Marcy Anderson said. “We work in partnership with nonprofits, government and the business community to inspire people to volunteer, and to engage volunteers in activities that in turn strengthen our community, and we recognize outstanding philanthropists in our community. James is clearly one of them. PenFed understands what it means to be a good corporate citizen and gets the company involved as well as its employees. PenFed’s employees subscribe to the credit union philosophy of ‘people helping people’ and make time available to assist others in need and support events to support charitable causes.”

The local volunteer outfit presented Schenck with this honor at its 20th Annual Business Philanthropy Summit in May. It’s at this event that Volunteer Alexandria’s leaders strategize and honor people in the community who both exemplify, lead efforts to contribute to, the organization’s vision and mission, which Anderson stated is to engage all in the community to “make a difference in Alexandria through volunteering and to build a stronger community by inspiring and mobilizing people to volunteer in Alexandria.”

“The Summit brings together business leaders and nonprofits to discuss community needs and celebrate local philanthropy,” Anderson said. “For 20 years, this breakfast event has provided an opportunity for approximately 250 Alexandria business and nonprofit leaders to exchange ideas and information and to keep abreast of current trends in business philanthropy. This event celebrates philanthropists in our community and the awards are given to outstanding businesses for their philanthropic giving, nonprofit board members as well as to outstanding nonprofit administrators.”

Schenck is an example of the Volunteer Alexandria vision in both a personal and a professional capacity. Not only did he help oversee the establishment of the PenFed Foundation as a member of the PenFed Board, but he also devotes much of his free time to service.

“James himself is no stranger to volunteering,” Anderson said. “He donates his time to many other charities and serves on several boards. People who volunteer on their own time often bring their passion to their workplace. And James has done that, with PenFed and the Foundation. He continues to set the example by selflessly serving others.”

Schenck’s service mindset is innate, having served in the United States Army for 13 years before joining the PenFed Executive team in 2001.

“When I was three years old, I remember patrolling the perimeter of my house wearing a military uniform and holding a toy rifle,” Schenck recalled. “Then in eighth grade, I saw eight Americans killed in a failed rescue attempt in Iran. I pledged to do everything in my power to make sure this military tragedy would never happen again. I vowed that day to become a helicopter pilot.”

Although a highly competitive process, becoming an Army pilot proved far more than a lofty goal for Schenck.

“After graduating from the United States Military Academy at West Point, I flew Black Hawk helicopters in Korea and trained other Army aviators as a night vision goggle instructor pilot,” he said.

It turns out that managing a national credit union was not a huge leap from military service, either. “After flying Black Hawk helicopters in Korea, Schenck served at the Pentagon, ultimately as the Special Assistant to the Secretary of the Army.

“I was honored to receive the Legion of Merit for my contribution to the Army by overseeing the creation of the $453 million Army University Access Online educational initiative,” he said. “Prior to my assignment to the Pentagon, I taught economics and finance at the United States Military Academy. This marked my transition to financial services. I found a passion for credit unions and their unique mission and commitment to service. Serving on a credit union board imbued in me the credit union philosophy of ‘People Helping People.’ As I learned more about credit unions’ cooperative principles, I became attracted to work in the credit union community versus Wall Street after my military career.”

Schenck brought his laser focus with him on his journey with PenFed, and it has benefitted millions of fellow veterans and active duty service members.

“I became president and CEO in April 2014, and I’m very proud of the results that PenFed has achieved since then,” he said. “Our assets have grown from $18 billion to $23.5 billion, growing annual net income from $116 million to $179 million, and growing membership from 1.3 million to 1.7 million. PenFed Credit Union is also very active in contributing to our communities. Each year, our credit union contributes at least 2 percent of earnings to charitable organizations. Last year, we donated more than $5 million, most of which was in the Greater Washington DC area.”

With the PenFed Foundation, Schenck is able to assist the national military community on a whole new level.

“One hundred percent of the money raised by the PenFed Foundation goes directly to programs helping active duty military, veterans, caregivers, and their families,” he said. “And, over the 17 years the PenFed Foundation has been operating, we have raised more than $30 million. Over time, the PenFed Foundation launched new programs to protect active-duty service members from predatory lending and help low-to-moderate income veterans purchase their first home.”

Schenck noted dozens of programs that have collectively saved veterans millions of dollars.

To name a couple, “a new program this year is the Veteran Entrepreneur Investment Program, and in the first three months, we’ve raised $1.4 million to provide investment capital to veterans starting up a new business,” he said. “Then, one of the foundation’s largest projects was funding the construction of a 52-bed hotel at the VA Poly-Trauma center in Palo Alto, Calif. From the date it opened in May 2014, the Defenders Lodge has provided over 100,000 room nights to veterans receiving outpatient services, saving them over $30 million in hotel costs.”

He added, “I believe true philanthropy is about bringing people together – from all walks of life – from all backgrounds, for the greater good of the community. A community’s success and its collective wisdom come from many concerned individuals working tirelessly for days – sometimes weeks, years and even decades – to accomplish shared goals, vision and dreams. I honestly believe ‘one’s life should be remembered not by one’s duration, but by one’s donation.’ I hope all of us will be remembered by our donations to mankind, to those in need and to those who make the world a better place for all of us.”