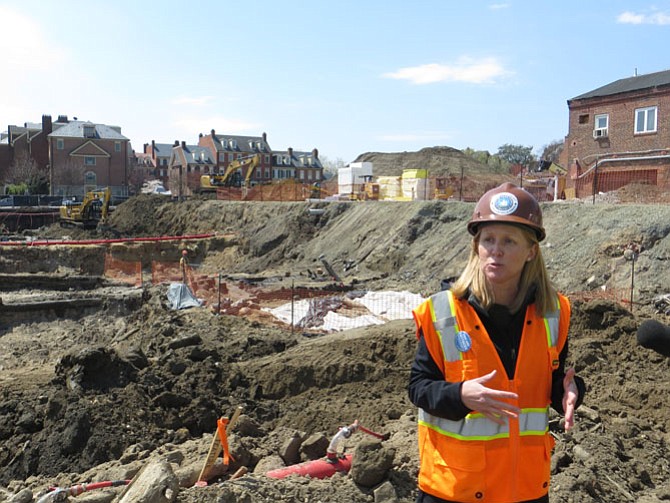 Buried ships are watered to keep them from warping and disintegration. 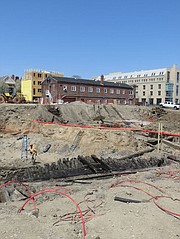 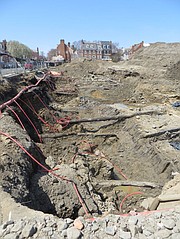 The largest and most intact of the uncovered Old Town ships.

As long as there’s been an Alexandria, there’s been a waterfront plan. In the mid-to-late 1700s the bustling port city was on the rise. The city continued to grow and expand west, but what it really needed was more waterfront property. What it had was a collection of derelict ships. The ships were sent to the bottom of the river along the shore, some filled with stones and built into cross-timbers. The old ships past their prime found a new life, buried as the bedrock of a new expansion into the river.

Now, a little over two centuries later, new waterfront development at Robinson Landing has uncovered the ships on which Alexandria was built. Three ships from the mid-18th century have been uncovered at the Robinson Terminal South site two years after a similar ship was discovered during the construction of the neighboring Indigo Hotel. Two of the ships at the northern end of the site were uncovered in early March. One had stones placed inside the ship and was built into the old wharf structure, giving an indication of its purpose and deliberate placement.

On March 29, the latest ship was discovered. It hasn’t been fully uncovered yet, but of the four ships that have been discovered on the waterfront this one is already the largest. The still-buried ship appears to be 25 feet wide and 46 feet long. Archaeologists at the site said one of the remarkable things about the discovery of the latest ship is that both sides of the hull are visibly intact, while other ships like the Indigo Hotel ship were only a partial sample of one side of the hull.

A map of Alexandria from 1798 shows the extended shoreline built overtop of the ships, meaning that the ships were buried before that point. Eleanor Breen, acting city archaeologist, said the site was under Pioneer Mill and the area was well preserved. The ships were mostly empty of other artifacts, which is consistent with them being derelicts rather than wrecked ships.

Currently, workers at the site are continually hosing down the exposed remains. Breen explained that as soon as the ships make contact with the air they begin to warp and degrade, and the water can help keep them preserved until they can be excavated.

Dan Bairy from Thunderbird Archeology was on the site when the ships were discovered. Bairy said when the backhoe hit the first ship, it popped up out of the ground. Bairy said he was mildly surprised, but that with the area once being the Thomas Flemming Shipyard they knew there had been a likelihood of finding some kind of ship-related artifacts.

“I was at the Indigo Hotel site so I knew immediately what it was and we were able to prevent damage,” said Bairy. “We moved in and began to clean it with trowels and brushes.”

It was the third ship, the larger and more intact one, that Bairy said really caught him off-guard.

“Standing next to it, it was above my head,” said Bairy. “That was really out of the ordinary. The completeness of it was amazing.”

Bairy also noted that most of the ships have the stern and bow cut off when they’re put into the ground, but the uncovered end of the largest ship is still intact. It’s still far too early to determine what kind of ship it was, but Bairy said it was likely a merchant ship. The ship’s futtocks, curved timbers that act as the ship’s ribs, are close together; meaning the ship was reinforced. Bairy said this would be consistent with an ocean-going merchant ship. Bairy said more information will come to light as more of the ship is uncovered.

“As much as we have exposed, there’s probably the same amount [underground],” said Bairy.

For Bairy, the exploration of the ships is a scientific process, but he said it’s hard not to get the occasional flight of fancy during the discovery process.

“Being down there, touching it, you feel in touch with the past,” said Bairy. “It’s a tactile version of history. It’s why we get into this."

What to do with the ships is still unknown. While the city is currently planning on keeping them with an option to study them, the ships will take up substantial room at the city’s storage facility. Craig Fifer, director of communications for the City of Alexandria, said the city hasn’t committed to a specific plan yet for what to do with the newly uncovered ships.