f Who We Hit in Alexandria
Votes

Who We Hit in Alexandria

Working towards a crash-free Alexandria with Vision Zero. 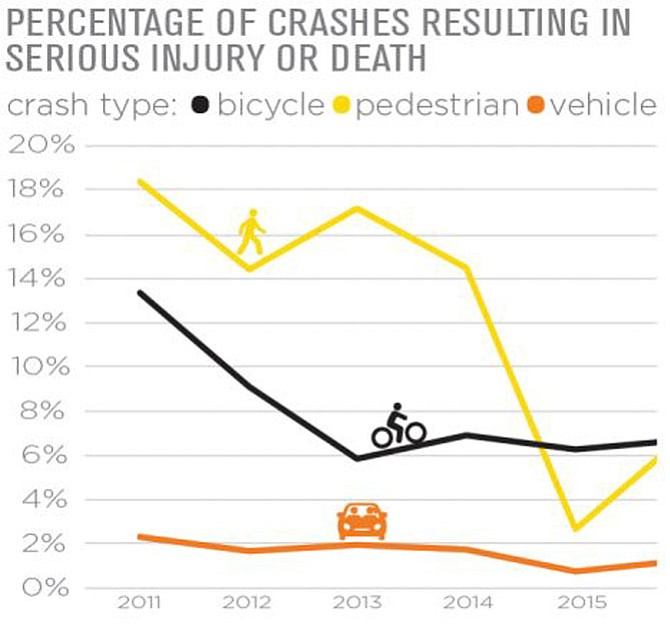 Map of crashes during the last year in Alexandria.

Vision Zero was first brought up as a proposal in the Pedestrian & Bicycle Master Plan, approved in May 2016. A Vision Zero policy was put together and approved by the City Council in January 2017. Since that time, an interdepartmental work group has been analyzing traffic crash data, engaging in public outreach, and working on an action plan.

Three top challenges emerged during the public outreach: distracted drivers, speeding, and people running red lights and stop signs. Of those surveyed in Alexandria, 16 percent either experienced or knew someone who was seriously injured or died in a crash, and cited the same three factors at the primary factors in their crashes.

The data collection also revealed a few hot zones for traffic crashes in Alexandria. Duke and Washington Streets are two of the biggest ones, also being two of the streets that see the heaviest traffic flow. Old Town has the highest concentration of car crashes in the city.

The next step for the Vision Zero project is to put together an action plan following the data analysis and public outreach. The plan is expected to be presented to the Transportation Commission for endorsement in December, then to City Council for approval in December or January. Captain Dennis Andreas from the Alexandria Police Department said the city’s law enforcement is already begun work responding to the initial findings of the Vision Zero project’s data collection and public outreach.

“We found holes in the data collection systems,” said Andreas. “We’re working to fix and improve that, giving us better ability to predict and respond.”

Andreas said the police department was working alongside Vision Zero to put together policy recommendations, both before the City Council and the state legislature, to improve traffic safety.

Typically, Andreas said departments within the police outside of traffic enforcement don’t pay much attention to traffic-related issues. Andreas said part of the police department’s response is to try and break down those barriers and look at ways each department can contribute to better traffic safety.

In an update on Vision Zero to the City Council on Oct. 24, there was some skepticism on the dais. Vice Mayor Justin Wilson said he was interested to see what specific, tangible policies the Vision Zero project could put forward to help eliminate traffic crashes.

“Reaching this goal is going to be an uphill battle as we’re also increasing our population,” said Redella “Del” Pepper. “That means more people on the streets, but that doesn’t mean we can’t try.”