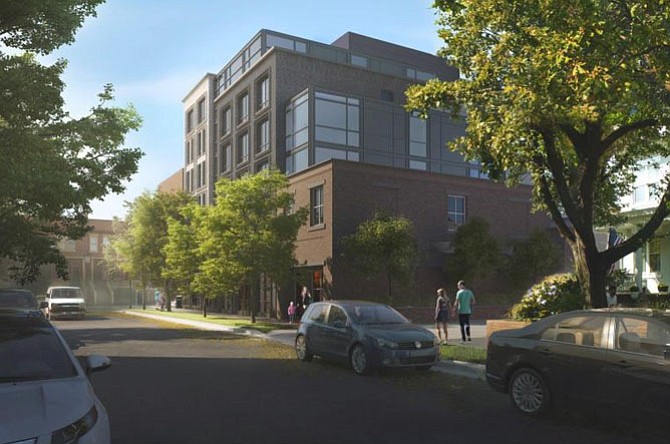 Location of the new mixed-use development.

Hot on the heels of Indigo Hotel opening in Old Town, a new hotel is looking to come to the other end of the King Street corridor. At the May 13 City Council meeting, the council unanimously approved the conversion of an office building and parking lot at the corner of King Street and Harvard Street into a mixed use development. The new structure will include a 124-room Hyatt Centric Hotel, as well as 10,400 square feet of office space and 2,500 square feet of retail currently scheduled to be a resturaunt. Valet underground parking will be provided under the structure for hotel guests and surface parking behind the building for the office.

The project comes with streetscape improvements along King and Harvard streets, as well as investments into affordable housing, bikeshare, and public art, but local residents were more concerned about how the parking and traffic changes will affect the character of the small neighborhood on the northern side of the building. As part of the approval, the building received a reduction of 38 parking spaces.

Following concerns expressed by neighbors at the council meeting, deliveries to the building must end at 9 p.m. rather than 11 p.m.

“These are [your] neighbors,” said Mayor Allison Silberberg. “This is where they live or sleep, and you’re coming through [with delivery trucks].”

The council included the change in delivery hours as a condition for approval, and Councilwoman Redella “Del” Pepper said she was hopeful that the new development would improve rather than detract from the character of the neighborhood.

“It isn’t that we’re going to wipe out all of this,” said Pepper. “They are making an effort to incorporate what’s there. They’ve really tried to do the best they can. I think it’s going to be a great addition.”