As they do annually, the head coaches of the nine Washington Catholic 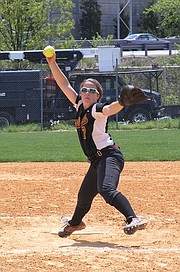 Athletic Conference (WCAC) teams got together to select players for the first and second All-WCAC Conference teams. This season, two Bishop Ireton Cardinals were selected for the WCAC honors.

Erin has been the workhorse pitcher for the Cardinals all season. She has amassed some 160 strikeouts and counting in a WCAC-leading 133 innings pitched over the season. Erin has a regular season batting average of .528, an on base percentage of .594 and a slugging percentage of .887. 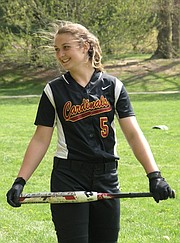 Both players were instrumental in leading the team to a win against Elizabeth Seton High School on May 2 to advance to the semifinals of the WCAC Championship playoff Tournament.

Erin has committed to play softball in college at Eastern Mennonite University next year in Harrisonburg, Va. in the Old Dominion Athletic Conference. Sawyer has yet to commit to play in college, however, as a junior, she is being looked at by scouts and coaches.

Erin and Sawyer also play together on their travel team, the Mount Vernon Magic 18U Elite, which last year won the 2016 USSSA Virginia State Championship, and finished 3rd at the 2016 USSSA National Championship Tournament in Salisbury, Md.

The Bishop Ireton High School Cardinals varsity is coached by Ann Krebs and Olivia Compton. In her first year, a rebuilding year due to the loss of five seniors after last season, Krebs has led the Cardinals to an overall record of 7-14. The team has qualified to compete in the VISAA (Virginia Independent Schools Athletic Association) State Championships which will begin May 16 in Richmond.