BID proposal sent back to the drawing board. 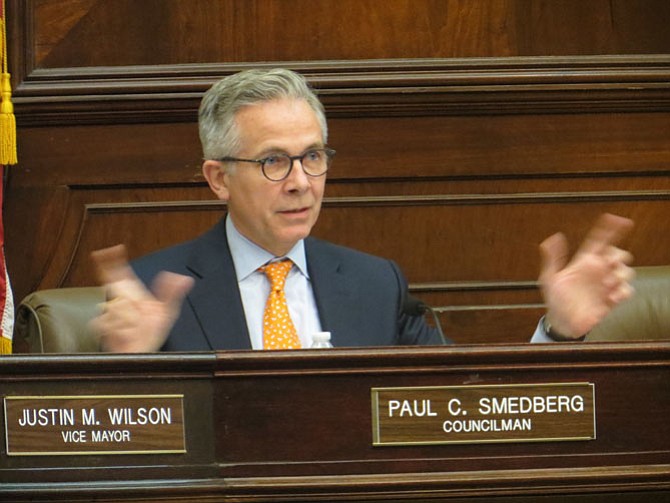 Alexandria — In Greek mythology, Sisyphus was a king who was punished for his

perceived arrogance and deceitfulness by being made to push a huge stone up a hill. When it reached the top, it would roll back to the bottom and force him to start all over again.

The Business Improvement District (BID) has rolled back down the hill.

After nearly two years of research and planning, the first stage of the BID was brought before the City Council on Saturday, June 24, only to be sent back to the drawing board on Tuesday, June 27.

A new proposal, put together by City Councilman Paul Smedberg and Vice Mayor Justin Wilson and signed by six members of the council, directed City Manager Mark Jinks to put together a new BID proposal that would be smaller than the original one and be more responsive to the public feedback opposing the most recent BID effort. Then, in the fall, the proposal would be voted on by businesses and property owners within the affected area. If the BID proposal received over 55 percent support, it would move forward from there.

“Saturday was an interesting discussion,” said Smedberg. “I didn’t see how it was possible, personally, to go forward with the ordinance with such a widespread of opinion that we were receiving for whatever reason .… From my personal perspective, original proposal was a bit ambitious for the first year.”

Smedberg said the proposal was a result of the feedback from opposition being targeted at specific pieces of the BID proposal rather than general opposition to the idea of a BID. According to Smedberg, the opposition to the BID seemed willing to compromise where proponents would not.

“One thing that was encouraging from my perspective, after the debate on Saturday, was the emails that we received,” said Smedberg. “What i found interesting were comments coming in from opponents of the BID. Many of them did not want to see this effort die but had very constructive and very good suggestions and comments that could make this work. I did not hear a lot of that from the proponents, I heard something else, which was unfortunate. It was this feeling of ‘if I don’t get everything, then forget it’. We’ve put together an outline trying to respect and take advantage of work being done and different perspectives raised by a lot of folks.”

Smedberg said the main aim of the new proposal would involve scaling the BID down in terms of size and scope of ambition. The tax on businesses and property owners is still undetermined but would be less expensive than the proposed 10 cents per $100 of assessed value. The size would focus on the length of King Street rather than the full waterfront and Washington Street. Stephanie Landrum, president and CEO of the Alexandria Economic Development Partnership, said the scale of the BID was determined after it was decided that more than one BID in Old Town would be infeasible.

“One entity, one vote,” said Silberberg. “Some entities would have 70 votes, that was a concern.”

While others on the council were supportive of the idea, Silberberg remained unconvinced.

“Business community overwhelmingly weighed in,” said Silberberg. “I think we would be remiss if we didn’t listen … In terms of establishing the district, I am still expressing strong concerns. I still have to be convinced of that [in the fall]. I am still concerned about what that means tax-wise and for businesses. I am supportive only in that I want businesses to have that vote.”

Other members of council similarly cited the extensive public feedback opposing the BID from the business owners who would be impacted by it.

“I want a BID,” said Councilman John Chapman, “but if these folks are paying taxes, and tax passed down from property owner, they need to have same rights as property owners. I’m not feeling that 50 percent threshold. There has to be significant buy in. This needs to be the business community’s project for old town. This has to be something that benefits them. I’m worried about us moving forward and not having a number of those.”

The conflict over the BID has divided many of the city’s business leaders. The opposition to the BID expressed uneasy satisfaction at the result, saying they still have concerns but are happy to see the issue being put forward to the entire business community.

“The council is finding its way through a broken path, correcting for errors from the past few years,” said Dan Hazelwood. Hazelwood said that the Alexandria Economic Development Partnership and those originally working on the BID had faced the impossible situation of being stuck between providing enough information about the BID for an initial proposal without seeming like the final form of the entity had already been decided on.

After the vote, opponents of the BID faced stern and animated rebuke from supporters in the hallway who accused business owners of getting involved at the last minute and disrupting plans. Danielle Romanetti, who was involved with the BID discussion from an early stage, chastised Hazelwood and other BID opponents for not participating in the discussion earlier. BID opponents in the hallway countered that despite limited outreach to businesses impacted by the BID, the opposition had been expressing their concerns for at least the last year. Arguments continued outside council chambers even after the City Council had retreated into the workroom for a closed session.

“I trust my fellow business people because we’ve worked together to solve problems,” said Jody Manor, former owner of Bittersweet and an advocate for the BID at the Saturday hearing. “A lot of opponents to this operation don’t participate civically. It’s unfair to continue for those of us who volunteer, who run the parades, who do the board meetings, who go to the the 7 a.m. waterfront commission meetings. It’s not fair for all of us to carry it.”

For both BID supporters and opponents, the City Council’s vote still leaves a lot of unanswered questions.

“I think it landed on its feet,” said Stewart Economou, who owned property inside the original jurisdiction of the BID. Economou did say he was unhappy that, despite being very present at the Saturday public hearing, the opposition was not permitted a speaking role during the Tuesday session. “There were so many iterations discussed tonight that it was hard to follow, but I think they will conduct a poll. I think we need that. We should have had that from the beginning. To that extent, I think it has been positive.”

Aimee Houghton, a supporter of the BID, said it was still unclear who was going to be leading and writing the new BID proposal.

“Now the council is going away for the summer, so who does the heavy lifting?” said Houghton. “The work group and AEDP spent two years developing, all of that was volunteer effort by business leaders that was taken away from their business to work on this.”

Over the summer, the new BID proposal will be developed and refined to be voted on by the affected businesses in October.