Volunteers come together to save an elderly resident’s home. 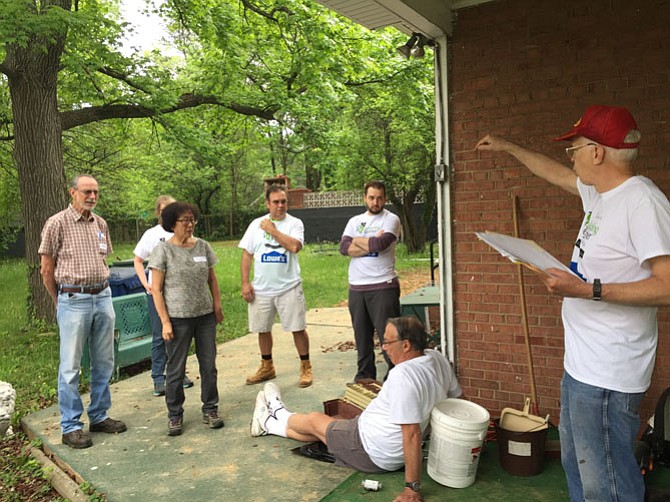 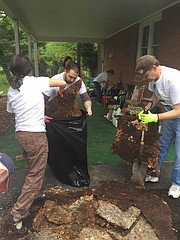 Volunteers help repair a small pit where car oil has built up.

Lois Brooks and Mayor Allison Silberberg with volunteers from Rebuilding Together Alexandria. 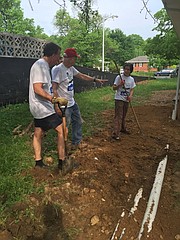 “It needed doing, so we did it.” — Dwaine McCollum

Lois Brooks had a problem. Poor building design and heavy snowfall both conspired to leave the 93-year-old widow’s basement several feet deep in water. Pipes designed to pump the water out of the basement empties them near the bottom of an outdoors staircase onto a small drain, which once clogged, diverted the water back into the apartment. Brooks rushed to try and save what possessions she could from the rising flood. Eventually the basement was cleared, but the water had damaged the walls and Brooks was left in fear of the next storm.

But when that next storm hits, the rainwater will flow away from the house. The house received a new piping system and landscaping upgrades to protect the basement, all of them installed for free by a team of volunteers. Brooks’ home was one of 43 projects across the city being worked on by more than 700 volunteers as part of National Rebuilding Day.

For Rebuilding Together Alexandria, it was the 30-year anniversary of the program. Katharine Dixon, president of Rebuilding Together Alexandria, said that the organization has grown from 50 projects each year to roughly 125 with a $1 million budget. Over that time, Dixon said the client age for those being helped has been slowly decreasing, meaning there’s more and more younger people being affected by issues related to low income.

All of those assisted by Rebuilding Together Alexandria are low-income families. Brooks has lived in her home for 53 years. Despite the troubles with the house, Brooks said she loves living there and she wouldn’t want to live anywhere except Alexandria. Her health and limited income have kept the house from receiving much of the necessary maintenance, so there was plenty for Dwaine McCollum’s team to do when they arrived.

“I love it,” said Brooks, noting that Rebuilding Together Alexandria had been out to help her house once before, over 10 years ago. “I didn’t know people did this. All these people, spending their time here helping me.”

McCollum is a carpenter who has been volunteering with Rebuilding Together Alexandria since 2000. According to McCollum, Brooks’ home was one of the more challenging projects he’d ever encountered. Many of the structural problems with the house date back to when it was first built in the early 1960s. McCollum and his team of volunteers weatherized the home, added insulation, installed deadbolts and handrails, repaired the downspouts, graded the yard and performed other services. Even with his team, McCollum said fixing the house wasn’t a one day affair. They had been working on parts of the house throughout April, doing prep-work for the site and getting the right materials.

“This job was more technical than we usually do,” said McCollum, “but it needed doing, so we did it.”

McCollum has a pretty consistent team of volunteers that comes together to work on these types of projects.

“A good team is the best,” said McCollum. “I like seeing everybody busy. Having volunteers come back year after year, that means things are working.”

“This team doesn’t have a sponsor like some of the others do,” said Betsy Hennigan. “We’re a ragtag group. Most of us have been doing it together for about four years. I like working with these people. You just get this good feeling at the end of the day.”