Flashes of Violence in Alexandria’s History 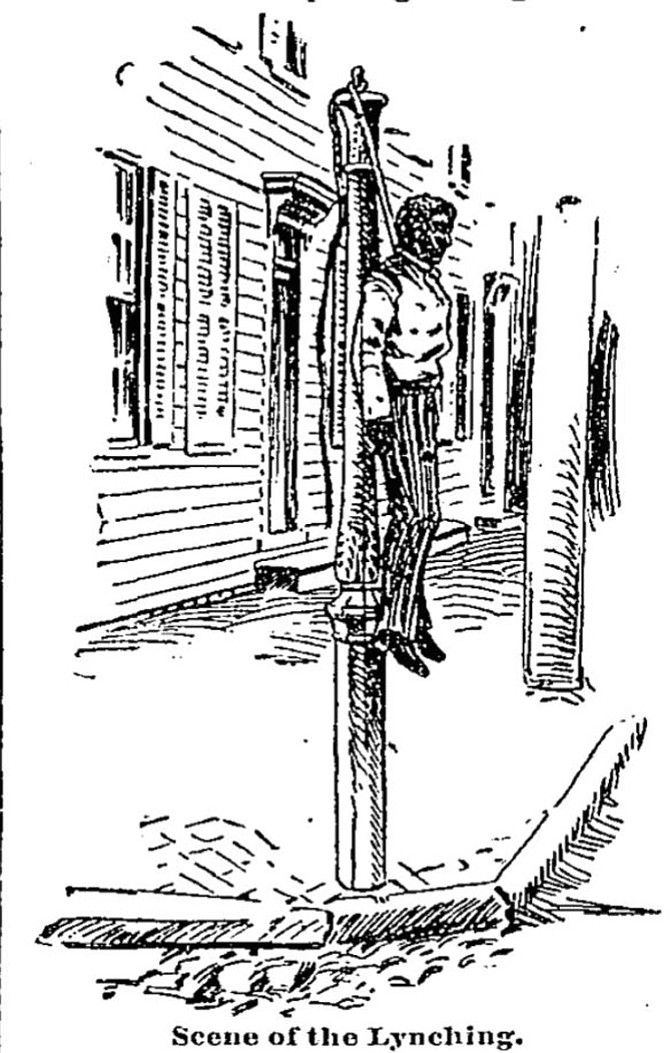 Sketch of a lynching in Old Town. Graphic contributed 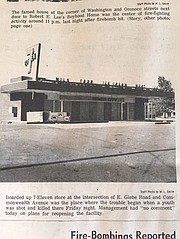 7-Eleven where the murder of Robin Gibson took place. 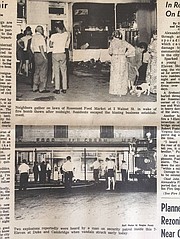 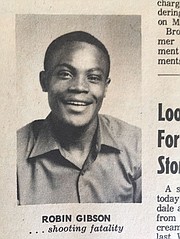 While racism in Alexandria has existed mostly under the surface, there have been moments in the city’s history where that tension has erupted into violence.

In April 1897, a story in the Alexandria Gazette titled “Hanged by a Mob” detailed the lynching of Joseph McCoy, a local black man who had been accused of rape.

“Joseph McCoy, the Assailant of Little Annie Lacy, Taken from a Cell in the Station House and Hanged to a Lamp Post — Thrilling Scenes in and Around Police Headquarters. The righteous indignation of old Alexandria was aroused last night … and as a result Joseph McCoy, a negro ravisher, was strung up to a lamp post, bullets sent into body, his body, his head split open with an axe and other indignities heaped upon his quivering remains.”

The Gazette account said McCoy had been arrested and accused of sexually assaulting Annie Lacy, a local 10-year old girl. McCoy denied the charge, but confessed during police interrogation. A mob assembled outside city hall and filled the street outside the police station. Led by Mr. Lacy, the mob broke through the front door and attempted to reach McCoy but were repulsed by the police. The group seemed to disperse after officers discharged their pistols, but the mob had reconvened at a nearby timber yard and fashioned an improvised battering ram. The main door was smashed and men poured into the station. The mob assaulted the officers defending the station, nearly killing one of the officers in a struggle for a pistol.

“McCoy, who had been listening to the assault, had become terribly frightened and had climbed up on the door and was secreted near the ceiling. The mob supposed they were at the wrong cell, and were about to leave for another, when one of McCoy's legs was discovered. He was pulled down with a yell and dragged to the pavement, and the mob surged toward Cameron street with him. The negro cried piteously for mercy and resisted all the way. The crowd turned down Cameron street to Lee street on the southeast corner made rapid preparations to carry out their purpose. A rope had been procured from Mr. G. E. Price's awning, a noose was soon around McCoy's neck and in less time than it takes to tell it he was dangling from the lamp post on that corner. Bullet after bullet was sent into his body, and when he had been cut down one of the mob used an axe on his head and blood and brains were spattered on the pavement.”

In 1970, the murder of 19-year-old Robin Gibson in a 7-Eleven ignited a the racial tensions that had been brewing throughout desegregation. John L. Hanna, assistant manager of the store, said he observed Gibson putting razor bags into a bag.

“Gibson then allegedly pulled a knife on Hanna. Hanna told police he then pulled a revolver from his right hip pocket and fired once. Gibson staggered toward the door and collapsed.”

“At this point, violence broke out as persons in the large crowd began hurling rocks into a nearby McDonald’s hamburger shop where customers were lined up placing orders.”

The crowd spread to other nearby stores, where more rocks were thrown through windows and a fire was ignited. As the night went on, the violence spread throughout Del Rey, more cars destroyed and cars overturned.

“An Alexandria policeman with riot gun and visored helmet chased a young black down the street,” according to the Alexandria Gazette. “The youth turned and darted through the knots of blacks scattered up and down Glebe Road. The policeman found himself alone. Surrounded. The crowd moved slowly and cut off any avenue for the policeman. He stood his ground and shifted his hands on the barrel of his gun. The crowd drew close.

As the incident came closer and closer to a breaking point, Ira L. Robinson appeared. A black activist, an attorney and candidate for City Council, the reports in the Gazette say Robinson moved easily through the crowd speaking softly to those he knew. He moved up to the policeman and guided him to the crowd’s perimeter. The policeman moved quickly back to the mobile command post set up at the nearby intersection. By 3 a.m., the crowds had dispersed. The newspaper’s report closes with the note that “things were normal again.”

But the unrest had just started.

Over the next three nights, violence continued across the city: 14 arrests and seven cases of arson.

The Hallowell House, the boyhood home of Robert E. Lee, was destroyed by a fire caused by Molotov cocktails. The City Council deliberated over whether or not to instate a curfew and there were calls from Alexandria’s white population for a group of armed citizens to patrol the streets.

Hanna was charged with murder that night, but was released on $10,000 bond shortly afterwards. In mid-June, Hanna admitted he had planted his own knife near the body. After one trial ended in a hung jury, he pled guilty to manslaughter and served less than a year in prison before he was paroled.

Andy Evans, who worked for Robinson’s campaign, said the campaign didn’t know it at the time but the unrest played a vital role in getting Robinson elected. On election day, Evans said the campaign gathered at Alfred Street Baptist Church and the staff had all felt resigned to a loss. But Robinson won, becoming the first black member of City Council since the end of Reconstruction. According to the Gazette archives, white Alexandrians asked about their vote cited Robinson’s saving of a white police officer as one of the major factors in their decision.