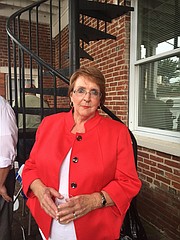 Today, Alexandria’s accused take legal representation for granted, but Kenneth Labowitz remembers the Alexandria legal system before Melinda Douglas. Labowitz said he remembered a time when lawyers representing the indigent were incentivized to have their clients plead guilty. There was one lawyer in the city who spoke Spanish, and when he wasn’t available to take a case with a Spanish-speaking client, the city would appoint a lawyer who spoke French because it was close enough.

On Aug. 18, a who's-who of legal professionals in Alexandria came together to celebrate Douglas and 30 years of the Public Defender’s Office. N. Alfred Street is packed with law offices, and nearly all of them seemed to be present for the celebration. The event was hosted by the Law Offices of Zwerling/Citronberg, Christopher Leibig, and Joni Robin. Several judges, current and retired, praised Douglas’ work to reform Alexandria’s public defense.

“I was a young judge when the office first started, and it’s grown into an excellent organization,” said Donald Haddock Sr. “[I’ve seen] hundreds of cases where clients were well defended by lawyers passionate about their work.”

“[Douglas] is the only public defender, and her reputation is not only second to none,” said Joe King, an Alexandria lawyer, “it’s the best defense money can’t buy. Her lawyers are among the best lawyers in Alexandria, and the city overall is better because of it.”

Commonwealth Attorney Bryan Porter, who often faces off against Douglas in the courtroom, praised her work.

“The Office of the Public Defender is a real institution and has significantly increased the quality of representation for indigents in Alexandria,” said Porter. “We may be adversaries in the courtroom, but we’re comrades outside.”

For Douglas, the first few months were a whirlwind of putting everything together while also immediately jumping into cases.

“I was hired in May, and I was in court July 1,” said Douglas. “Meanwhile, we were finding space, hiring lawyers, and getting equipment.”

Whey they started, the only office space they could get was a big, long room where they separated workspaces with borrowed purple dividers. Douglas credits the office’s early success to financial support from the City of Alexandria at a time when her public defender office was one of the first in the Commonwealth. According to Douglas, there were three public defender’s offices across the state that all started up in that year.

“It was an adventure,” said Douglas. “I had a chance to do it my way with a lot of autonomy. When I went to law school, it was because of social justice [issues], not for money. I never got that thrill from private work. It’s about empowering the unempowered. It’s an opportunity to work for those people and with other like-minded young lawyers.”

Douglas said working alongside idealistic young lawyers who want to make the world a better place despite the horrible pay is the best part of the job. Eventually, the office that originally had a sign swinging on the door saying “Send Help” was able to hire more staff and investigators. Still, Douglas says Alexandria’s Office of the Public Defender faces many of the same problems public defenders across the country do: underfunding.

“We always need more money to train people,” said Douglas. “We do the best we can with scholarships and fellowships. But Alexandria leads in terms of local supplements, they’ve been helping to get us funded.”

Despite the challenges, Douglas has no doubts about whether it’s been worth it.

“Our office is a family, with a commonality in our mission,” said Douglas. “Never in my 30 years have I had to wonder if what I did was meaningful.”