National Night Out in Alexandria
Votes

National Night Out in Alexandria

Bringing police and residents together. 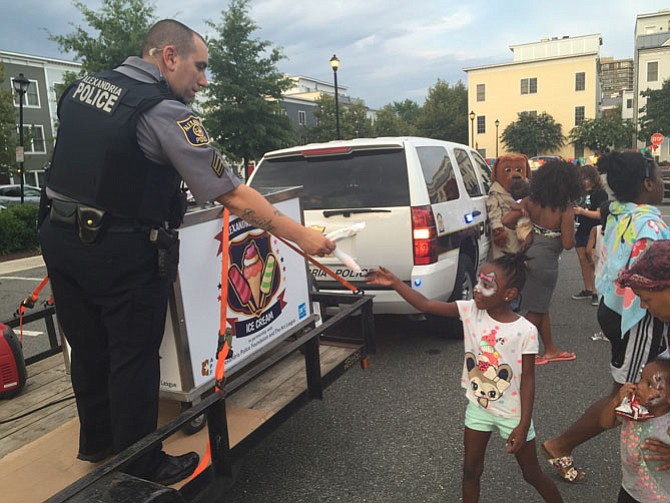 Alexandria — Councilwoman Redella “Del” Pepper can remember how it all started. As she

stood at the edge of Colesanto Park in Del Ray, she remembered a time when parts of the east end of the city were completely overwhelmed with drug dealing and other violent activities. For a few hours for just a few days, Pepper remembered everyone in the neighborhoods that were worst hit by the drug epidemic coming out into the streets and gathering with the police in sufficient numbers that, if only for a moment, they were able to shut down the open drug market in their streets.

“We’ve been sponsoring this for … I can’t even count how many years,” said 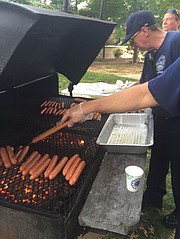 Firefighters cook hot dogs donated by the 7-Eleven for National Night Out.

Rod Kuckro, president of the Del Ray Citizens Association. “The neighborhood really likes it. It serves a purpose. It makes people feel good and you get a different appreciation for what [first responders] do. Every year, it seems like one or two more neighborhoods seem to participate.”

In Del Ray, the event takes place less than a week after a shooting left three victims critically injured. Pepper called the shooting deeply unsettling and said the city needs to work to address conflicts before they turn violent. But Kuckro says this kind of incident is an anomaly in the neighborhood.

“We’re a commuter corridor here, largely our law enforcement issues are traffic and parking-related,” said Kuckro. “We’ve had car break-ins, side mirrors knocked off, stuff like that.”

Overall, Kuckro said the city has been pretty responsive to the neighborhood’s concerns. After local residents complained about rampant speeding problems, police on motorcycles monitored the area and caught several speeders. Kuckro said the tickets left a noticeable impact on local speeds.

“We were excited about it this morning,” said Ryan Poyante, a nearby resident. “It’s great to have the kids come out and really meet the neighborhood.”

“This is really emblematic of this neighborhood,” said Morgan Tomassian.

On the other side of the Metro line, the Braddock community came out to the Charles Houston Recreation Center for face-painting, cornhole, and other activities.

“It brings a level of humanity to both sides, to see people working and playing,” said Garrett James, from the Northern Virginia Urban League’s Young Professionals Network. “Relationships affect the way we treat each other. No one thing will solve everything, but events like National Night Out help …. Alexandria police have a good reputation. There’s still a ways to go, still room for improvement, but that dialogue is happening here.”

Abbey Oklak works in a local architecture firm and lives in the Braddock neighborhood. At National Night Out, she was helping to paint faces.

“I’ve been doing this for about three or four years,” said Oklak. “It’s fun and it’s good to meet your neighbors. I live here and work here. Being part of the community is important to me …. We’re a changing neighborhood. Everyone should feel involved.”

While there aren’t many law enforcement issues in her neighborhood, the series of homicides that took place over the last two years still concerns residents. In 2016, a revenge cycle left two dead just a block away from the recreation center.

“Neighborhood safety is a big concern,” said Oklak. “We had shootings here last year. It was a shock. You don’t think that happens in your backyard. Knowing the police are out here is reassuring.”

Nick Ruggiero is the officer in charge of community policing for the Alexandria Police Department. It’s his 13th National Night Out. His daughter accompanies him on his rounds wearing the Scruff McGruff the Crime Dog costume. Ruggiero says he promised her a new pair of sneakers in exchange. The Charles Houston Recreation Center is their seventh and final stop of the evening. As he hands out ice cream, many of the parents and some of the children approaching recognize him and chat.

“We get to know everyone in the community,” said Ruggiero. “It makes people more willing to talk to us. Kids know some of the officers by first name.”

In the past, Alexandria has had issues with local citizens who witnessed a crime not coming forward with information. Ruggiero said community policing partially aims to make local residents feel more comfortable with the police and more willing to talk about those types of issues. In one of the Braddock Road homicides last year, Ruggiero said it was citizens coming to police officers they knew and talking to them that helped to break the case.

“I’m a firm believer that those people wouldn’t have come up to us if they hadn’t known us,” said Ruggiero. Specifically, Ruggiero said having a police officer as a resident has helped build relationships in the Braddock Road community. After a string of local homicides in 2015, the Alexandria Police Department worked with Alexandria Redevelopment and Housing Authority to have a police officer as a resident in the local affordable housing.

“When you know your community, policing is a lot easier,” said Aaron Taliaferro, the resident officer living in the Braddock Road neighborhood. “You can solve issues better and work with local people. It makes life easier.”