A look at hoarding in the wake of fatality 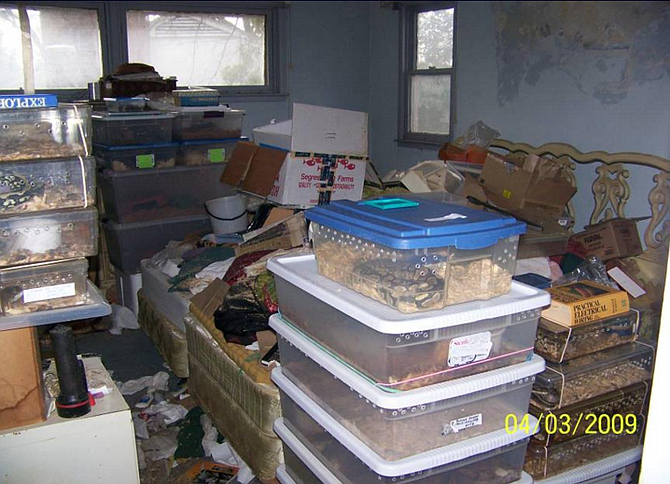 A hoarding situation in an Arlington home. Photo contributed

A hoarding situation in an Arlington home.

A hoarding situation in an Arlington home.

For those in Alexandria in need of help dealing with a hoarding situation, they can reach out to the city via Call.Click.Connect at 703-746-4357 or email the hoarding task force directly at hoardingtaskforce...

Sixty firefighters from Arlington, Alexandria, and other departments across the area all came out

to respond to a fire at a single family home last month, only to watch helplessly as the building burned. Flames were visible on the first floor; smoke pouring out of windows on every level. As firefighters tried to enter the building, they found the front entrance impassable due to so much trash piled up inside.

According to a statement by the Arlington County Fire Department, widespread clutter inside the home not only delayed search, rescue and suppression operations, but was also later found to be a factor in spreading the flames. When firefighters were finally able to enter the house, one of the residents was dead and the other was found critically injured.

Hoarding is a mental illness, but Lawson says the victims aren’t “just crazy.”

“There’s a distinction between hoarding and inability to self care,” said Lawson. “I see hoarding as people who are intentionally accumulating items, sometimes go out and bring things in, sometimes accumulate items over years. These are people who are physically or mentally unable to care for themselves or environment. Peel away the layers … they have a situation or condition that has precluded them from taking care of themselves.”

Hoarding is a mental health crisis that extends beyond just collecting objects or being disorganized. Those who have worked with hoarding situations say it’s almost always immediately recognizable.

“Hoarding disorder is a type of obsessive compulsive disorder, which falls under the broader umbrella of anxiety,” said Ted Dumas, an associate professor of psychology at George Mason University. “The victim either saves individual items or everything. It’s saving what other people would view as worthless. For most people, that’s associated with childhood trauma. Often there’s some kind of loss, so they save.”

Dumas says hoarding is dangerous to the victim in several ways.

“If they save everything, it can become very cluttered,” said Dumas. “They can fall or be tripped. They also aren’t the only ones living there anymore, there’s germs and vermin. With all the piles, it’s not usual for the kitchen to be full of stuff, including the stove top. That makes it harder to get help to that person.”

Philip Pugh started out as a mental health worker in Arlington and now serves as the acting deputy director of code enforcement for Alexandria. Hoarding is a problem that grows in both Arlington and Alexandria as the population of both localities ages, Pugh says. With more elderly residents, code enforcement is starting to find more houses packed full of clutter and blocking egresses.

“There is a community of folks still among us who went through the depression era,” said Pugh. “During the depression, families tended to hold onto things, thinking they will need them at some point as a resource. That behavior was passed down through generations. We find folks in their 70s and 80s still tend to collect. It’s a combination of economic conditions, the aging population, and stressful life events.”

In Arlington and Alexandria, Pugh says the programs combating hoarding tend to mirror each other.

“Inspectors who work in property maintenance are assigned areas or communities,” said Pugh. “They see the parcels and properties in the that community every day or at least several times a week. They note changes in conditions, like overgrown yards or trash improperly disposed of.”

Often Pugh says a home with a hoarding situation inside can appear perfectly normal from the outside. Still, in other cases hoarding is a problem which slowly takes over every part of the property. When the house starts to overflow with clutter, Pugh says victims will often start to pack their garage, then their trash areas, then their car.

“When we see that, that tells us we need to knock on the door to get the attention of the inhabitant,” said Pugh.

“Working as a young code enforcement [inspector] in Arlington, it was frustrating to know what was going on inside,” said Pugh. “We’d see curtains pressed together or stuff pushed up against the windows. But the knock on the door sometimes ends with just that. People aren’t obligated to open for a code inspector.”

If they receive no response, Pugh says inspectors will leave an oversized yellow door hanger on the residence letting the owner know that there is a safety concern regarding the property. Sometimes that is as far as the process is able to go.

“Virginia is a property rights state,” said Lawson. “People in single family homes have the right to live the way they want to live. If their situation doesn’t immediately impact neighbors, [there is] not a lot we can do, but we try.”

Lawson and Pugh both noted that hoarding situations are much easier to address in rental properties or multi-family complexes where the situation is also a concern for the safety of other residents.

“That factors a lot more in our ability to encourage or enforce people to resolve their hoarding,” said Lawson. “It’s a fire hazard.”

“Rental properties are the best case scenario,” said Pugh. “With rentals, we are able to include the property owner in a solution. Ultimately responsibility rests on the tenant to maintain rental unit in the same condition they received it. If they fail to do so, the property manager, owner, or community manager can [evict] the resident.”

“Sometimes residents will call us back and want to know why the government is knocking on their door,” said Pugh. “Normally this opens up avenues for a conversation just to gather baseline information.”

Getting a conversation started about the issue gives code enforcement their foot in the door. In most situations though, Pugh says the code enforcement inspector alone cannot resolve these issues.

“If you’re standing there, it’s overwhelming at best,” said Pugh. “These are places packed floor to ceiling.”

Depending on the homeowner’s situation, Pugh says the code inspector will tap into the broader network of local government services.

“If the resident is elderly, we call adult protective services,” said Pugh. If children are involved: child protective services. If animals: we will alert animal control. It’s such a tedious task to reach out to them one at a time so we developed a hoarding task force and made a group email.”

Both Arlington and Alexandria have hoarding task forces. Lawson says when Adult Protective Services becomes involved, they interview the victim to try to get at the root of the problem and examine what options are available to resolve the problem. Part of that process is determining whether or not the victim has assets and support available to fund their own recovery.

“We’re a government, we’re here to support them,” said Lawson. “If they have the resources we do encourage them to utilize those. If we determine they need financial resources, if we deem necessary, we will provide that support.”

Pugh says getting families involved in the recovery process can be crucial to solving the long-term issues.

“Initially people will tell you they don’t have anybody, but once their [friends and family] learn [the victim] is living in dangerous conditions and unable to stay in their home, they become a big part of the solution or resolution to get it cleaned up,” said Pugh. “A lot of times, family walk away from these conditions. It’s not until they’re contacted by city or code enforcement that they are reunited with this family member. It’s rare that people walk away or stay away. The much better outcome when families are identified and become a part of the solution. Sometimes granddad goes to stay with one of his kids or grandkids and plan is put in place to clean up.”

Other times the family or friends of the victim are completely unaware of the hoarding circumstance. Lawson remembered one situation where, after Arlington County government became involved, the victim’s friends came to his assistance “like a mini-army.” One of them told Lawson that they’d known the victim for 15 years but none of them had ever visited the victim’s house.

DURING THE PROCESS of reclaiming the house, Pugh says he tries not to displace people any longer than necessary.

“We’ve gotten pretty creative at keeping people in their homes,” said Pugh. “Six months ago, a senior citizen was living in a place where there was only enough room to sit in her lazy-boy. She had fallen and was transported to the hospital. When she returned, the owner offered to put her up in a partially finished unit while the property manager went through her stuff: identifying trash, keepsakes, must haves, that kind of thing. Eventually she was returned to the unit after two weeks and it was cleaned and organized. She was extremely grateful, it had all just gotten away from her. She was able to get mental health and senior services.”

“We operate least restrictive and least intrusive to most,” said Lawson “We always start on the low end of the scale, with conversation. We’re trying to engage and assess. A lot of times, it doesn’t get adversarial: people are willing to work with us. … For the most part, once we get in there, they’re more accepting. It’s a mental illness, they recognize ‘yeah, this is bad, I’m trying and I’m just not able to work through it. If you can help support me and work through it, we’re amenable to assistance.’”

For those who refuse assistance, Lawson says Adult Protective Services must determine the competency of the victim.

“From a social worker perspective, competent adults have a right to self determination,” said Lawson. “That’s something we’re constantly assessing: how competent is this person? How aware are they of their situation? If we feel it’s something that needs to be resolved, we offer services. Competent adults have a right to accept or refuse services. If safety is an issue, we may bring in more authoritative body to enforce regulations and statutes, like code enforcement.”

While the house can be cleaned, the underlying issues that cause hoarding will likely resurface unless addressed. Dumas said there are both pharmacological treatments, particularly anti-depressants, and therapeutic methods to combat hoarding.

“One solution is a non-shopping trip,” said Dumas. “The therapist goes to the shopping mall with the patient and convinces them to go home without anything. Do that over and over until they can do it on their own.”

The other solution is called the “downward arrow.” Dumas says the goal is to reduce distress at the thought of losing these items. The therapist has the victim weigh the costs and benefit of saving things, and through that process helps the the victim understand that the benefits of a healthy life outweigh those of physical collection.

“With hoarding comes the same comment for most psychiatric conditions, it’s a disease, should be viewed as such,” said Dumas. “These people should be viewed with dignity or respect, same way as cancer or coronary disease.”