Out of the Depths: Story of Alexandria ship revealed.
Votes

Out of the Depths: Story of Alexandria ship revealed. 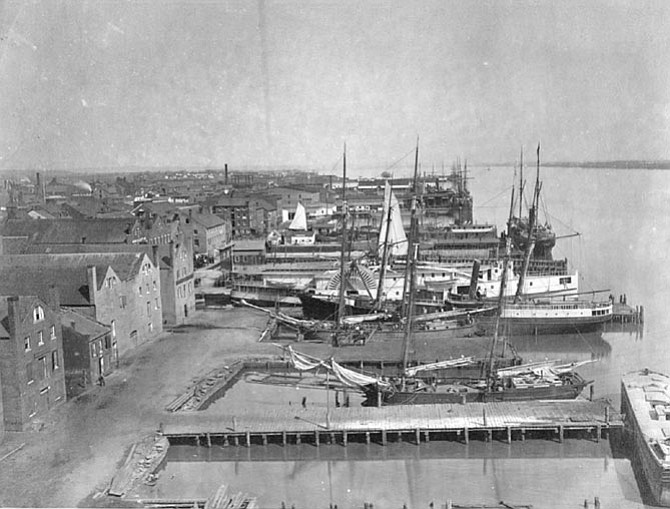 Warehouses and new shipping built were built over the remains of older scuttled ships by the early 1800s. Photo contributed

Alexandria shoreline in 1788, the red square indicating where the ship was found.

Remains of the Alexandria ship when it was first discovered.

A Peep recreation of the Alexandria ship’s discovery.

It was a good and sturdy ship, but she was getting old and the repairs just weren’t worth the cost. Her unknown captain had pulled her up near the shore in Alexandria and it was discovered that the sacrificial planking at the bottom of the ship had been eaten away by worms from warmer climates, likely a recent trip to the Caribbean. The ship had been hauling heavy cargo for years, like timber and stones, but this was the end of her trip. The captain sold the boat to locals on the waterfront, and the top layers were hacked apart with axes for firewood. The bottom parts of the ship sank into the water, joining other broken hulls of ships of ships littering the shallow shoreline.

Then, roughly 230 years later, a construction crew working at the Indigo Hotel site raised the ship back up to the surface. The city had shifted, the shoreline now being a few blocks east, but the ship had remained intact.

Benjamin Skolnik, the city archaeologist, revealed new details about the ship buried on the Alexandria waterfront at the Save Our Ship Lecture on April 1 in the Torpedo Factory.

The age and birthplace of the ship were determined through a process called dendrochronology: the science of dating events, environmental change, and archeological artifacts by using characteristic patterns of growth in tree rings. Not only can tree ages be determined by the number of growth rings, but dendrochronologists can use the spacing of the rings to determine unique regional environmental shifts that impacted the tree growth. These ring configurations are the fingerprints of a forest, and dendrochronologists Michael Worthington and Jane Seiter from the Oxford Tree-Ring Laboratory were able to determine that the timbers for the ship had been growing in Boston from 1603 up until 1741, the last visible ring for many of the planks.

While the exact function of the ship remains unknown, the frame pieces of the ship being so close together shows that it was very robust, enough that navy experts who first examined the ship were hopeful that it might have been a warship. Instead, Skolnik said it was determined more likely to be a cargo ship used to haul very heavy goods, like rocks and timber.

Skolnik was also able to determine roughly where the ship had travelled.

“The cheap wood bumper on the side of the ship was chewed through with ship worms,” said Skolnik. “That tells us about the life of the ship. It had been to warmer, saltier environments. That’s not just local … most likely it went to the Caribbean.”

Determining when the ship sank involves diving into late 18th century records. The majority of the locating was possible by following the changes in the city’s shoreline. In 1788, the shoreline was shifted to a position where the location where the ship was discovered would be alongside the bulkhead. However, by 1798, a lease record between Elizabeth Copper and John Thomas Ricketts shows that the area that was once shoreline where the ship sank had become a parcel of land. The window of the ship sinking can be narrowed a little to before 1796 where a mutual assurance fire insurance policy indicates the same.

The reason for the ship’s sinking was pieced together from two clues: a city ordinance found in Alexandria Gazette archives and marks along the top of the discovered wood. In 1799, the City Council passed an ordinance banning boats from being broken up and disposed of along the waterfront because it was cluttering the shore. Skolnik noted that this indicates that ships being broken apart for firewood with their remaining wreckage sunk into the river was common enough that it required a city ordinance to combat it. This helps to explain the v-shaped ax marks found along the top floor of the ship.

The ship is currently sitting in two tanks of water in a city warehouse. Its next voyage will be to a conservator to help study and preserve the ship to eventually be returned to the city and put on display. A conservation fund, Save Our Ship, is underway to help pay for the further study and preservation efforts. Links to the donation page can be found at alexandriava.gov/Archaeology.