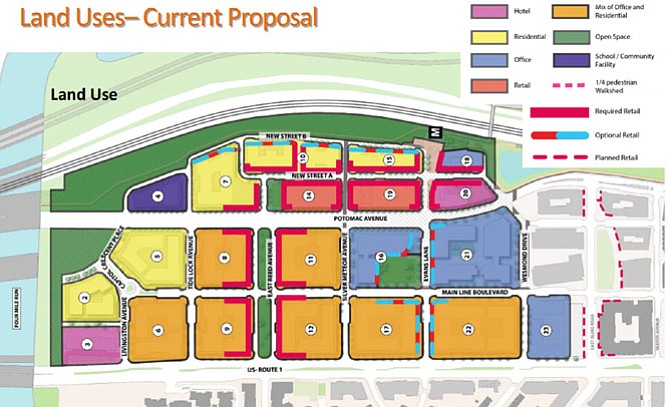 Today, North Potomac Yard is a strip mall and an empty movie theater. But as the city works its way closer to the realization of its plans to build a new Metro station at the site, details of the City Council’s vision for the surrounding area are emerging.

At the April 4 City Council meeting, staff presented the North Potomac Yard Small Area Plan update. The current plan is to have a small plaza, 0.3 acres, at the entrance to the Metro. From there the plan opens into a mix of residential and office buildings with required retail fronting. The prevalence of residential zoning in the area was concerning to Councilman Paul Smedberg, as Potomac Yard was originally envisioned as a primarily retail/commercial sector, but Planning and Zoning Deputy Director Jeff Farner said there’s language in the plan that deals with occupancy of the buildings. According to Farner, the type of occupancy will be subject to review during the Development Special Use Permit (DSUP) process. In response to earlier City Council feedback, the building heights across the site are varied: sloping upward from 50 feet and 100 feet around the Metro to 220 and 250 further north.

The main draw for open space in the area is 4.5 acre Potomac Yard Park north of the Metro Plaza. Smaller open space areas, like Crescent Park (2.3 acres) and Market Commons (one acre) are scattered throughout the site. However, some on the City Council were unhappy with the scope and placement of the open space.

“I’m not impressed,” said Councilwoman Redella “Del” Pepper. “It’s all together, it’s not walking distance for some folks. It’s lovely for the people that have this as their front yard, but if you’re on the other side of Potomac Avenue you’ve got some distance.”

For Mayor Allison Silberberg, the open space in the center of North Potomac Yard was too limited.

“Even Farragut is an acre and a half, almost three times the size of your Metro Square here,” said Silberberg, pointing to the 0.7 acre “Metro square” park and the 0.3 acre Metro Plaza at the station’s entrance. “I would caution us: everything doesn’t have to be programmed. It has to be open and usable. I don’t think we’ve left enough space and it’s all up near the rail line.”

Some affordable housing is already worked into the North Potomac Yard plan. The city will allow 30 percent bonus density in exchange for affordable housing. The plan also allows for potential Alexandria Redevelopment and Housing Authority (ARHA) replacement units at the site.

“If I have to choose between open space and affordable housing, I know who's going to win on my side,” said Bailey. “I’m not saying go back to the drawing board, but if we have all this open space, why not put it to good use?”

“We need to look at our opportunity for development,” Chapman agreed. “This is within the watershed of the Metro and along some major streets.”

A community meeting about the North Potomac Yard plan will be held April 18 at the Potomac Yard fire station.