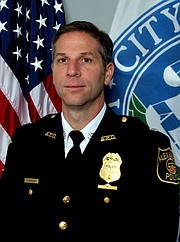 “Chief Huchler’s 25-year tenure and diversity of experience in local law enforcement make him the right choice to lead the Police Department at this juncture,” said City Manager Mark B. Jinks in a press release. “I am confident the Police Department is in good hands as we continue the selection process for a permanent chief.”

Huchler has been with the Alexandria Police Department since 1991, and was promoted to deputy chief in 2012. As deputy chief, Huchler oversaw the Investigations Bureau.

“As interim chief I need to continue the good work that the Alexandria Police Department is doing,” said Huchler. “Chief Cook leaves a big legacy behind. We will continue the work he has started with youth and community engagement. I'm looking forward to working with the community and making sure the police department is doing what they expect … we want to make sure the Alexandria Police are doing the work necessary to keep the city safe.”

At the City Council meeting on Sept. 27, Huchler spoke to the council about upcoming plans for police data storage and transparency. Huchler emphasized that, particularly in light of the national controversies surrounding use of force, Alexandria Police are continuing training on community engagement. Huchler said academic experts will be visiting the police over the next few months to offer training on combating bias in policing.

According to Huchler, the city is undergoing a national search over the next few months for the next chief of police.