The Campagna Center leadership considers move out of Old Town.

The Campagna Center leadership is investigating the possibility of selling its property at 418 S. Washington St. and relocating to a new location in the West End to better suit its mission.

The Alexandria-based non-profit focuses on providing educational and social development programs for the city’s underserved populations.

“We want to be accessible to those who need services,” said Mann. “There’s no space here to take care of kids. We’ve maximized all accessible space for people and things. This isn’t a building configured to these kind of services. It lacks levels of consideration most families would want. People are providing sensitive information at a dining room table with other families nearby.” 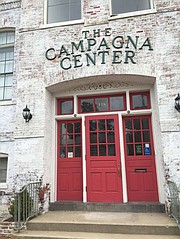 Entrance to The Campagna Center at 418 S. Washington St. 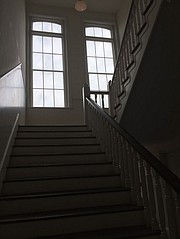 Christopher Campagna, a member of the board of directors and grandson of founder Elizabeth Anne Campagna, works in real estate assets and says that if the center were to move this would be a good time to do it.

“My day job is making sure people have their space aligned with [being] productive and profitable,” said Christopher Campagna, “The Campagna Center is doing exactly that. Objective is to achieve efficiency; to put office space into less space we’re using today. That’s true for all businesses today. There’s not a business I talk to that isn’t trying to be more efficient with their space. Right now, the [center is] spread out over three floors, from the basement to the third story. If someone has to ask Tammy a question, it’s probably easier to email her. There’s a lot of opportunities to improve that situation.”

Christopher Campagna said that the organization has long discussed the possibility of a move and the current real estate market makes that prospect more financially viable.

“Now is a good time to consider this because of the market factors,” said Christopher Campagna. “You can buy a lot more out on the West End than you can in Old Town right now. The market is hot in Old Town and not as much in the West End.”

Currently, the building at 418 S. Washington St. is owned by The Campagna Center. If The Campagna Center moves, Christopher Campagna said it’s not clear yet whether the center would move into an existing building or construct a new one and whether or not the new building would be bought or leased.

Dave Millard, chairman of the board of directors for The Campagna Center, agreed with Christopher Campagna’s assessment of the real estate situation.

“This is a decision made from a position of financial strength,” said Millard. “We own this building outright. If we end up staying there, that’s all right, but we think it’s important for us as a board to explore the real estate market and take advantage of it in its current condition. We think that’s very strong in Old Town, and we want to give thought to the possibility of moving to a new location where it’s more efficient to conduct our business.”

Walter Lukens, chair of the Committee on Mission and Capacity that had raised the idea, said the financial viability of the move is still to be determined.

“This building is an asset, but it’s not the best one to do the mission,” said Lukens. “This is an exploratory effort. We have to understand the value of this asset and weigh that against other things we want to do and services we provide. All of this comes down to this being a smart financial decision. We’re in a good place, we’re profitable right now, and our number one priority is to do no harm to the stability of the organization.”

Millard said his ideal for the new building would have classrooms as well as office space.

“The need, generally speaking, [is] for classroom requirements,” said Millard. “What we have with head-start programs is a need for physical space as well. We’re hoping we might be able to alleviate some pressures on us. The only way to find out for sure is to test the real estate market.”

While the building has been used for educational purposes since 1812, The Campagna Center moved into the property in the early 1980s. Christopher Campagna said for himself that there was little emotional attachment to the current building the way there was for the center’s original home on St. Asaph Street.

As the process for exploring the possibility of the move gets started, Mann said the organization will be working to be as closely involved with the local community as possible.

“We will work to put together a [request for proposal] within the next week,” said Lukens. “We will vet [applicants for the building], that could be done before the end of the year, but the exploratory phase [for whether or not to move] could be longer.”