Police in Arlington started wearing body cameras on Aug. 29, and in June the Fairfax County Board voted to approve an 18-month research period for concerns about privacy with regards to body cameras. In D.C. police have been using body cameras for a year. But while Alexandria’s neighbors move forward with body camera usage and related policies, the city has pushed the body camera pilot program back until the fiscal year 2018-19.

Crystal Nosal, public information officer for the Alexandria Police, said the department is ready for body cameras and would have an approach similar to Arlington’s, but that the department needs to wait for city funding. 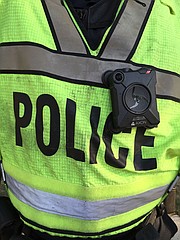 “From our standpoint, it goes back to the city,” said Nosal. “It was shelved budgetary wise. At some point we do want body cameras. We will start a trial period and have a certain amount of cameras on the street.”

But with a limited budget, Nosal said the bigger priority is having more officers on the street.

According to City Manager Mark Jinks, FY 2018-19 would just be the starting date for initiating some level of the project. Like Arlington and Fairfax, body cameras would start as a pilot program in Alexandria before being fully deployed, according to Jinks.

“The reason we have not funded something earlier than that is that our priorities have been looking at staffing, mostly adding more patrol officers,” said Jinks. “The police have said body cameras could cost $1 million a year in, with data storage being high element. You’ve got 300 officers out there recording. You’ve got all that storage the full time they’re on duty. There are policies that need to be written.”

Jinks said a citizen survey conducted in 2015, where 90 percent of those surveyed said their interactions with the police were positive, helped convince Jinks that more patrol officers were more important than body cameras in the immediate future.

“We thought it would make sense [to hold off implementation because] we don’t have an immediate, urgent need,” said Jinks. “The relationship between the community and the police officers is good. The Human Rights Commission reviews our use of force. We’re probably the first metropolitan area to do that. We felt that body worn cameras didn’t come up to the top of the list in funding. We also expect tech to improve and price to drop.”

Like Arlington and Fairfax, Jinks also said Alexandria needs to sort out issues surrounding privacy and body-cameras. Jinks also says he’s wary to implement a policy for Alexandria when it may be superseded by state laws on body cameras. Jinks compared body cameras to drones, where various legislative bodies had to scramble to update laws for rapidly transforming technology.

“There are questions in regards to what you need to keep, what is public information, can you redact out, and what is private,” said Jinks. “There are all sorts of questions that have to be resolved. Giving funding restraints and those open questions, we thought it would be best to hold off. Eventually, body-worn cameras will be standard, there’s no question about that, but it’s a question about cost right now.”

So far, Arlington has become one of the first jurisdictions in Northern Virginia to put cameras on patrol officers. Through December, the Arlington Police Department will be testing and reviewing different types of body cameras.

According to the Arlington police website, the body-worn cameras assist in collection of evidence, enhance the department’s transparency, provide better evidence of public/police interactions, and can help de-escalate situations.

Though the policy was developed over the last four months, Savage said the department has been working towards implementing body cameras for years.

“There’s a lot going on in the world related to body cameras,” Savage said. “We haven’t been pushed by the board to try them. We wanted to do this. We try to maintain ourselves as a modern organization.”

But permanent police body cameras in Arlington are far from a certainty. Deputy County Manager James Schwartz said there has not been a funding request for a larger program because the final costs have not been determined.

“We’re not sure yet if this is a priority,” said Schwartz. “There’s a lot behind the use of the cameras. We need to really understand how big this is. There’s the dimension people see, but there is also storage issues and [questions about] the ability to review the footage. I wonder if the jurisdictions more aggressively [implementing body cameras] fully understand what’s involved.”

But for academics studying body cameras, the jury is still out on their effectiveness. Dr. Cynthia Lum is an associate professor at George Mason University’s Department of Criminology, Law and Society as well as a former Baltimore police officer and detective. Lum says there’s a lot more research and study that needs to go into a region’s decision whether or not to implement body cameras than most people might suspect.

“Police and people have high expectation for body-worn cameras,” said Lum. “They think they will improve police accountability or reduce complaints or use of force. Whether or not that actually happens has to be seen.”

Lum says that while some academic studies have shown that body-worn cameras reduce the use of force, others have indicated the opposite. When officers have greater discretion over whether the camera is turned on or off, Lum says it can lead to an increased use of force. If a department is going to implement body cameras for police, Lum says the department needs to have solid policies that reduce the amount of discretion officers have in regards to camera activity.

But Lum also said less discretion for having the camera on or off can also have detriments.

“Police agencies have to consider what impact this will have on people’s willingness to call them for help or to give them information as witnesses, victims, informants or suspects,” said Lum. “They have to consider what impact the camera has, positive and negative, on the way they receive information from the public. Many agencies are trying to accommodate for the other concerns by having strict policies on when they can turn on or off their cameras, like when you go into someone’s home and the victim says ‘I don’t want to be filmed’ you turn it off … but while some agencies have that prompt required by the officers, others might now. Police agencies have to think carefully about how this will impact people calling in.”

While the press for police to adopt body cameras has largely been spurred by hostile encounters between police and minority communities, Lum says many of those same communities would also be most vulnerable to the negative consequences of body cameras. In particular, Lum says body cameras could set back police relationships with illegal immigrant communities.

“Some agencies have tried hard to tell these communities ‘we’re not here to turn you over to [Immigrant Customs Enforcement], just call us if you’re victimized,’” said Lum. “But that’s going to be a challenge for agencies who’ve been that relationship, because some communities will feel less comfortable calling the police. Domestic violence victims or those experiencing a mental illness, as well, might feel less comfortable with their encounter being filmed.”

Lum said the best thing police departments can do early in the body camera process is to reach out to the community, do a pilot testing program like Arlington has, and approach the technology cautiously.

“Tread carefully with this technology,” Lum said. “Go step by step and refine policies about body cameras. Stay connected with communities and community leaders, because much of that sentiment is changing. Two years ago, folks I’ve spoken to from community groups definitely wanted body cameras, but now some of those folks are anticipating the issues with privacy and filming people. The cameras are pointed outward.

Lum also noted there could be unexpected costs associated with the program, like an increased need for staffing at the Commonwealth Attorney’s office.

“People tend to focus on police and body-worn cameras, but that records an incredible amount of information, a lot of which isn’t redacted but all of which can be used in court,” said Lum. “Who is going to look through all of that? How long can these be stored? I talked to someone in a homicide unit where patrols showed up to a scene wearing body cameras, and you have 10 officers standing around for three hours. That’s 30 hours of video that will need to be examined. There’s a lot to think about beyond just the cost.”

Lum said the public involvement in the discussion of body camera policy will be crucial for the police departments.

“The public, like the police, have to keep up with knowledge being generated about body-worn cameras,” said Lum. “This is something that affects people directly … Knowing that research is a responsibility, not just for police but also for citizens. Citizen groups and leaders of communities can help by distilling and disseminating that information.”

Alexandria Police Chief Earl Cook agreed that citizen input will be important, but said he didn’t believe concerns about citizens reaching out to the police will be a major hurdle for the department.

“I don’t think citizen engagement will be a problem in the long run,” said Cook. “The public will get used to that. Some of that concern will be eliminated by education about what cameras can or can’t do. That’s why we need to have citizens looking at the scope of our policies. Citizens need to let us know about what kind of camera policy they want us to pursue in Alexandria.”