Community expresses concerns about lack of diversity in proposed redistricting. 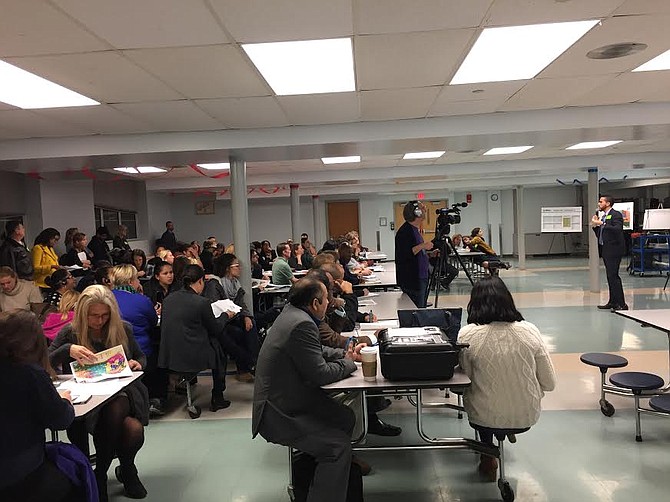 ACPS parents, students, and teachers at a redistricting public forum on Nov. 14. Photo by Vernon Miles.

Alexandria City Public Schools (ACPS) need to redistrict. The lines separating the school districts have been in place for 17 years, and the demographics of the city have shifted dramatically in that time. Even with redistricting, the Long Range Educational Facilities Plan says the schools’ ideal target range is between 90 and 110 percent capacity. But among parents, teachers, and students at the Nov. 14 public forum on redistricting held at George Washington Middle School, there were deep concerns that the redistricting hadn’t done enough to balance the diversity of the schools.

Elementary school redistricting Option 9, a variation on Option 8 with minor adjustments based on community feedback. Aaron Cropper, senior GIS developer/analyst at Cropper GIS, said that Option 9 will have the least amount of impact on Alexandria students.

The boundaries shift for a number of reasons. Instructional Capacity, the number of students assigned to a school and accounting for the number of classrooms and resource rooms available, is one of the top criteria for a boundary shift. Student safety, transportation, sensible boundary lines and diversity are all other criteria that are considered when a boundary is changed. For ACPS, diversity is broken up into ethnicity, gender, English Language Learners (ELL), and Free and Reduced Meals eligibility. But while the redistricting options help balance school enrollments, some say very little is being done to make the schools more diverse.

“If we’re looking at your options, there’s not much difference,” said Dianara Faget, an ACPS parent. “We’re getting a new school, but we all funnel into the same high school, so it should be balanced. The schools should have the same diversity. Most of the schools don’t budge, and that’s not fair to the kids. It’s a bubble.”

Some of the students attending the presentation had a stronger reaction to the current and proposed school boundaries.

Nyla Fox, also a student at Hammond, said the boundaries basically segregate the schools and that none of the maps seem to change that in any substantial way. Both students said they have concerns that certain schools seem specifically separated based on socio-economic lines.

Fifty-four percent of ACPS elementary school students qualify for Free and Reduced Meals (FARM), but William Ramsay Elementary, Patrick Henry Elementary, Cora Kelly School for Math, Science and Technology and the unnamed new elementary school all have near or above 70 percent FARM students. With the exception of a potential two percent decrease for Patrick Henry, none of those schools will see any reduction in percentage of FARM eligible students. Ramee Gentry, a member of the School Board and head of the Redistricting Committee, said adjusting the school districts for capacity can create an imbalance in diversity and other factors, so unusual shapes on the school district plans like a section of North Old Town attached to Matthew Maury Elementary School in Del Ray are part of the plan’s attempts to balance its diversity levels.

The data shows significant racial disparities between schools, though this is largely reflective of the geographic locations of the school. While Hispanic students only compose 35 percent of ACPS elementary school student population, Cora Kelly is 70 percent Hispanic. However, according to City-Data.com, the Arlandria neighborhood in which Cora Kelly is located is 56.9 percent hispanic, the densest concentration of Hispanic populations in Alexandria. All three options proposed at the Nov. 14 meeting have Cora Kelly’s Hispanic population increasing to 72 percent. Cora Kelly also has a disproportionate concentration of ELL students. While 43 percent of ACPS students are ELL, currently 66 percent of Cora Kelly’s students are ELL. None of the presented options decrease that population at Cora Kelly.

ACPS elementary schools with percentage of students eligible for free and reduced meals.

Mary Renee, a teacher at Cora Kelly, said those disparities can have an effect on the classroom.

“This disparities between the schools are so deeply ingrained that it can affect the curriculum,” said Renee. The only way for schools to continue to receive Title I funding, financing for schools with a high percent of students from low-income families, is to continue to score higher in testing. Renee says that puts a much heavier emphasis on test scores at Cora Kelly than at other schools, leading to things like recess and lunch being cut to 15 minutes each and former Principal Brandon Davis being reassigned after telling only families of failing students that their children could opt out of testing. Renee said it was disappointing that none of the presented options do more to balance those discrepancies.

Other parents expressed concerns that Jefferson-Houston, a school that remains unaccredited despite recent improvements in testing scores, isn’t receiving a broad enough range of students.

“If kids are opting out, we need to look at the school,” said Barry. “We want to believe in the schools but we want to make sure our daughter has a good education.”

Barry said if the school is not accredited by the time her daughter is old enough to attend, the family might move a few blocks away to attend Lyles-Crouch.

As the process moves forward, Topping and other parents said they are still waiting to hear from the School Board whether or not grandfathering will be allowed in the new school districts. For others, there’s a lingering uncertainty that the School Board seriously considers public input. Several said the School Board voting against the recommendation of the Patrick Henry Advisory Group in June cast doubts about ACPS transparency.

“We want to see the plans that will actually go forward,” said Stacey Rudolph, an ACPS parent. “After the final maps are picked, there’s no further public review. So the vote could be on something completely different. It seems like there’s another agenda. It feels like they’re going to do what they want. I’m worried about a repeat of [the Patrick Henry process]. It’s a false sense of transparency.”